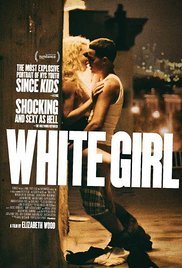 Extensive drug use and promiscuity

This movie tells the story of a black girl, Kim, raised by successful and socially aspiring parents (black, of course) who will not socialize with or even acknowledge other blacks. Guilty of prejudice against their own race, they bring Kim up to be a white girl. Because of her lack of racial identity, Kim doesn’t quite fit in: all her friends and dates are white, yet as a child other children called her “oreo.”

At college, she becomes addicted to “the white girl,” or cocaine, and though Kim has entered as a merit student she now faces failing grades. Mercifully, she meets Bob, a totally clean, pre-med black student, and starts a new life as they fall in love. One day, Kim acquires an evil, ensnared roommate, Vanessa, who wants to lure Kim into her fast track life. Kim backslides into her old cocaine habits — worse than before. Thus, ensues oppressive and explicitly lurid details of the lives of these two young black girls who aspire to be white (they wear blue contact lenses, for instance), and apparently live for the next high.

Vanessa is particularly afflicted. She has been doing cocaine longer, and in exchange for a powerful job gives her body to those who promote her. Her folly leads to her death, but Kim’s life is just barely rescued. Fortunately at the end, Kim denounces “the white girl” and reunites with her stable and loving boyfriend, Bob.

The purpose of the movie is twofold: to teach pride and racial heritage, and to teach the power and danger of drugs. However, the message could have been delivered in a much more uplifting and effective way. The detailed depiction of the girls’ drug-crazed lives certainly exposes the deceit of drugs, but actually teaches drugs rather than salvation from them. We learn the light by studying the light, not by studying evil. Therefore, God has no part in this film. His name is not called upon nor glorified (except when Bob briefly prays in a hospital room for Kim). How tragic that no one told these girls about Proverbs 14:27, “The fear of the Lord is a fountain of life, turning a man from the snares of death.”

The film maker uses some interesting, though way too graphic, techniques to reinforce his anti-drug message — actual television commercials that show rats dying from the ill effects of cocaine. There are other senseless scenes as well that do not add to the premise, and some characters seem like ridiculous caricatures. At its best, THE WHITE GIRL is a valiant attempt to show the anguish and horror of drugs, but without knowledge of our true Savior fails completely.