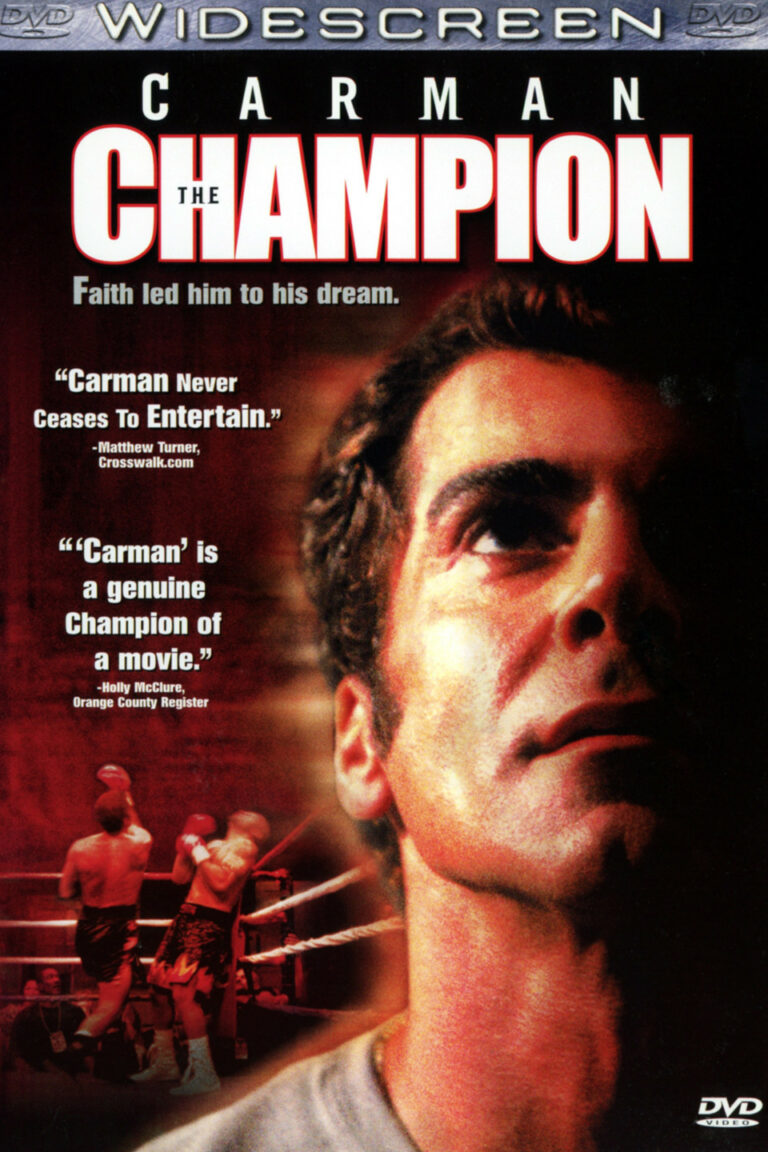 Christian musical artist Carman stars in CARMAN: THE CHAMPION, a movie about Orlando, a former boxer turned preacher who works part-time as a security guard for a hotel. One day his former rival, Keshon, is throwing an out-of-control party in the hotel. Orlando tries to clear Keshon out and lands a lucky punch, which is captured by news photographers. The publicity puts Orlando in contact again with Mr. Laracco, the gangster who owns Keshon. Orlando doesn’t want to get into the ring, but he does want money to buy a new Christian shelter in memory of his father. Some street thugs, however, beat him up, resulting in brain damage. Orlando tries to back out of the fight, but Laracco threatens the life of Orlando’s mother.

THE CHAMPION has a character-rich story, and, with support from a good cast, Carman does a fine job of portraying Orlando. However, sometimes the camera work and staging is uneven. Furthermore, the movie contains some sleazy content, including drug dealing, associated with the villains, and there is a big, slightly bloody boxing match at the climax. Even so, THE CHAMPION has a Christian worldview woven into the story, and is worth watching and supporting at the box office.

(CCC, Pa, L, VV, S, N, AA, DD, M) Christian worldview with some earthy pagan elements; 7 light obscenities including a commercial for a product called “Whup Ass” & a derogatory reference about a youth minister getting a woman pregnant; surprising but moderate amount of violence, including slightly bloody boxing scenes, implied beating of a man in a car with baseball bats & men in truck shoot at a man in another car, threats against a child & a man’s mother, & a fiery explosion; bad boxer surrounded by scantily dressed women, sometimes two at a time, doing provocative dances in two shots at a wild party; men in boxing trunks & low-cut dresses; alcohol use & drunkenness; smoking & drugs, including cocaine & heroine, with two little boys used by evil drug dealer to distribute drugs; and, lying, cheating and fixing boxing matches, all condemned.

The good news is that CARMAN: THE CHAMPION has a compelling, character-rich story. Even better, the Christian worldview is part and parcel of the fabric of the story. Best of all, the movie has a message, but it does not preach at the audience.

The not-so-good news is that a little tweaking of the script would have made this a much better movie, even if it had been produced on the same budget. For instance, there is no jeopardy for the first 25 minutes of the movie. Jeopardy is what holds the audience’s attention. Jeopardy is something that is at stake that the hero is willing “to die for.” As soon as it becomes clear what’s at stake, the movie takes off and is very compelling.

The movie opens with the singer Carman playing a boxer, Orlando Leon, who’s fighting for the title against an extremely mean black boxer, Keshon. Orlando loses. Years later, he is a preacher operating a rundown youth center and works part-time as a security guard for a local hotel to make ends meet.

One day his former rival, Keshon, is throwing an out-of-control party in the hotel. Orlando tries to get Keshon to cease and desist. Keshon threatens Orlando, and Orlando lands a lucky punch, which is captured by news photographers. Suddenly, it is clear that the title holder has a glass jaw, and so, the title match is in jeopardy.

Behind the match, however, is a group of thugs led by Mr. Laracco. Laracco had tried to get Orlando to take a dive years earlier. Now, finding that his champ has a glass jaw, he wants to schedule a rematch between Orlando and Keshon, wherein, behind the scenes, he will pay Keshon to take a dive.

Orlando doesn’t want to get into the ring, but he does want money to purchase a new youth center in memory of his father. Complicating matters is the fact that his brother, Freddie, works for Laracco. Freddie tells Orlando that, if he fights, he can pay for the new youth center with his winnings.

The subplot involves a little Mexican boy named Cesar, who is running drugs for Big Mike. Orlando catches Cesar after he tries to steal Orlando’s leather jacket. For restitution, Orlando has Cesar work at the church. Cesar, by the way, has a beautiful mother, Allia, whom Orlando likes.

Angry that he has lost the services of Cesar, Big Mike and some of his goons beat up Orlando. The beating results in severe brain damage.

Now, in this condition, he has to go fight his nemesis. Orlando tries to back out of the fight, but Laracco informs him that he was responsible for the accident that killed Orlando’s father when Orlando wouldn’t take a dive. Laracco says, “This fight is for your mother’s life.” Thus, the stage is set for a life-threatening final confrontation.

THE CHAMPION proves that the complexity of a plot does not make a movie interesting. What does make it interesting is when the jeopardy or the point of attack is revealed. Carman does a good job of portraying Orlando; the characters are sympathetic; but the photography and storyline leave a bit to be desired, except in the boxing scenes and the movie’s compelling climax.

In all, the movie has the Gospel woven throughout, but it is not clear as far as the plot is concerned whether the Gospel is the answer to Orlando’s problems, or whether it is his own persistence and fortitude that saves the day.

The camera work is problematic at times and some of the staging and settings look like something from the 70s. There’s a few other discouraging elements. The sex, alcohol and sleaze associated with the villainous Keshon, for instance.

The good news, however, is that Gener8tion X Films is getting better and better. They’ve learned a lot. They should be supported so they can continue to improve their craft. Furthermore, Carman has a strong screen presence and should bring a big audience to this movie who will see its virtues and ignore its defects.