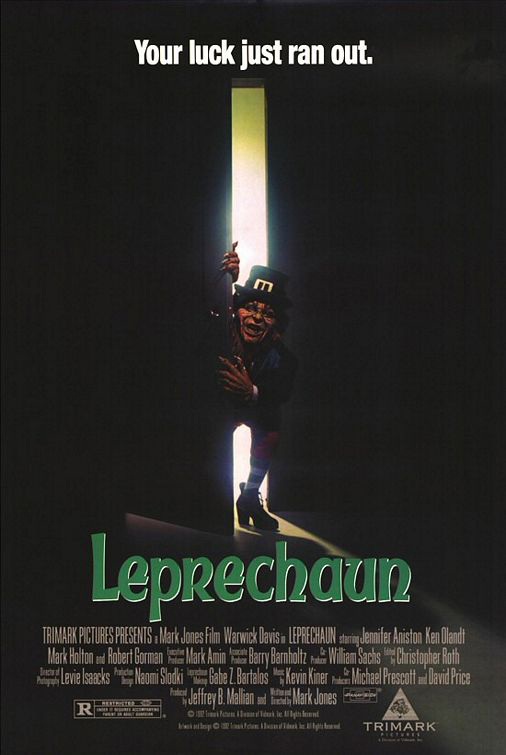 In LEPRECHAUN, Irish folklore's cute creatures take a perverse twist: stalking innocent people with intent to kill. When Dan O'Grady frees a leprechaun in exchange for his pot of gold, the vindictive leprechaun follows him to retrieve his fortune and kills his wife. LEPRECHAUN is a cheap horror film, with schlock acting, editing and dialogue.

Irish fables tell of wee people, their mischievous pranks and their fabulous treasures of gold. In LEPRECHAUN, folklore’s cute creatures take a perverse twist: stalking innocent people with intent to kill. The story begins in Ireland, as Dan O’Grady frees a leprechaun in exchange for a pot of gold. Returning to his North Dakota home, Mr. O’Grady expects to live a life of luxury. However, the leprechaun follows him to retrieve his fortune and kills his wife. In response, Mr. O’Grady captures the leprechaun, stuffs his body into a crate and seals it with a four-leaf clover, the one object that holds power over the creature. Years later, another family stumbles upon the vindictive leprechaun.

LEPRECHAUN is a cheap horror film, with schlock acting, editing and dialogue. The special effects are cheesy, the jokes lame and suspense minimal. Blood and gore includes a coin dealer’s demise by pogo stick, a police officer’s mauling, and the assorted biting of hands, faces, legs, and victim’s necks. The leprechaun is an indestructible goblin who springs back to life after being shot several times at close range, regenerates a severed hand and replaces a gouged eyeball with one he plucks from a corpse. Geared toward youth, the movie reinforces mean-spiritedness and destructive attitudes.