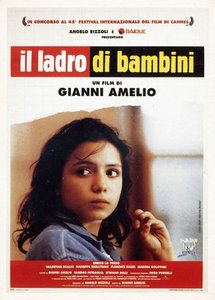 Winner of the Grand Jury Prize at Cannes (1992), THE STOLEN CHILDREN tells the story of two unwanted children, an 11-year-old-girl and her 9-year-old asthmatic brother, and the Carabinieri officer charged with taking them to an orphanage in another part of Italy. As they travel together, the relationship between the trio grows from intense suspicion and distrust to one of love and friendship. In the tradition of Italian Neo-realism and using non-professional actors, THE STOLEN CHILDREN is a rare masterpiece, a film that will linger and provoke thought in the viewer's mind a longtime afterward.

(B, L, S, V) In this Neo-realist drama, the theme that love overcomes adversity is marred by: 5 obscenities & no profanities; brief sexual innuendo (11-year-old girl referred to as prostitute); and, a couple of fist fights & struggles between army officer & children.

Winner of the Grand Jury Prize at the 1992 Cannes Film Festival, THE STOLEN CHILDREN is the story of a young military officer and two unwanted children. Initially, a Sicilian woman in Milan is arrested, after being accused of selling her eleven-year-old daughter Rosetta into prostitution. A twenty-five-year old Carabinieri officer is put in charge of escorting Rosetta and her nine-year-old brother, Luciano, to a religious orphanage near Rome. However, the orphanage refuses to admit the children because of Rosetta’s past, referring to them as “problem children.” Thus, the officer must take them all the way to Sicily to an institution for problem children. Antonio finds himself growing fond of the children, and they, of him. A moving incident occurs at the beach where Antonio and Luciano take their outer clothes off, wade into the water and play in the water as if they were father and son. The hitherto silent Luciano begins to open up and laugh with Antonio, and asks him, “Will you come visit me at the home?”

THE STOLEN CHILDREN is a rare masterpiece, which will linger in the viewer’s thoughts a longtime after viewing. Like other Neo-realist films, it creates a documentary illusion through location shooting and the use of predominantly non-professional actors. While THE STOLEN CHILDREN shows us the problems in our world, it needs to go further and show the solution to these problems in God’s love given in Christ.