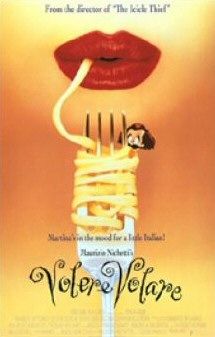 The Italian film, VOLERE VOLARE, a comedy that mixes Italian Neo-realism with animation, deals with the sexual relationship between an off-beat cartoon sound-effects man and a jaded prostitute with a bizarre clientele. Filled with nudity and fornication, the movie turns on Little Moustache's (the sound-effects man) changing into a "toon"; however, Director Nichetti overdoes the gimmickry and transformation causing the viewer to lose interest.

VOLERE VOLARE (I WANT TO FLY), aside from a fairly tantalizing mix of Italian Neo-realism and animation, turns out to be an obnoxious, light-weight comedy. In the film, a Chaplin-esque character known as Little Moustache, shares a studio with his brother who works with an array of skimpily clad women for his soft-core porno movies. Little Moustache acts as a sound-effects man for classic cartoons. He soon meets up with Martina, a prostitute who specializes in fulfilling the quasi-erotic fantasies of her clients. Before long, Little Moustache and Martina fall in love despite a number of misunderstandings. One of these incidents occurs when Little Moustache disappears while on a date with Martina. Unknown to her, his hands have become yellow “toon” hands that rove and fly at will, and their antics prove more than he can bear. It’s not much longer until Little Moustache has “toon” feet and legs, then a body to match, and finally, his head follows suit. However, his metamorphosis does not stop Martina from loving him.

The film VOLERE VOLARE, with its evil plot of an illicit, kinky sexual relationship outside of marriage points up once again the truth of Genesis 6:5 when God observed “That every imagination of the thoughts of…(man’s heart) were continually evil.” Regrettably, what too often passes for comedy in Italy or in the United States is nothing more than pornography under the guise of sophisticated filmmaking.