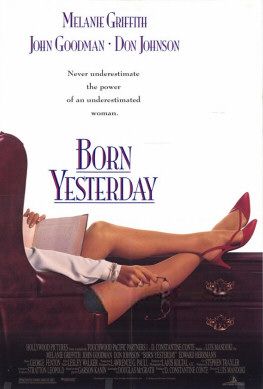 In a remake of the 1951 movie, BORN YESTERDAY sticks close to the original plot comprised of a "dumb" Las Vegas showgirl, Billie, that millionaire Harry Brock falls in love with but hires someone to educate her. The trouble ensues when she and her tutor enjoy each other too much, and the former "dumb" blonde turns the tables on Harry. This is a funny, enjoyable movie and quite well done, but it does have some unnecessary profanities and some sexual innuendo.

BORN YESTERDAY does a double-take on its 1951 predecessor with its “dumb blonde” heroine, Billie Dawn (Melanie Griffith), who smartens up by the film’s end. The movie opens with Las Vegas showgirl Billie meeting Harry Brock (John Goodman), a millionaire, who falls for her and takes her to Washington where he has important business. To Harry’s chagrin, however, Billie lapses into innumerable malapropisms such as her total misunderstanding of Communism’s fall in Eastern Europe. She remarks that it’s a shame that it happened, but we should mind our own business. Harry’s discomfort over Billie’s ignorance wears on him, so he hires Paul to educate Billie. Soon, Paul awakens a desire to learn in Billie, and she begins to understand the power in knowledge. Of course, they fall in love, and by the end of the movie, Billie realizes that she no longer wants to be associated with Harry and his questionable ethics.

The process of changing the ignorant and tasteless Billie Dawn into a woman with a degree of sophistication and intellectual bearing makes BORN YESTERDAY a funny, laughable movie. Further, Goodman and Griffith work well together. Unfortunately, Harry does take the Lord’s Name in vain in a few places, which makes the movie very offensive for moral individuals and families. Also, Harry’s and Billie’s living together, along with sexual innuendo, will put this film off limits to many. This is a shame because BORN YESTERDAY is an enjoyable movie.