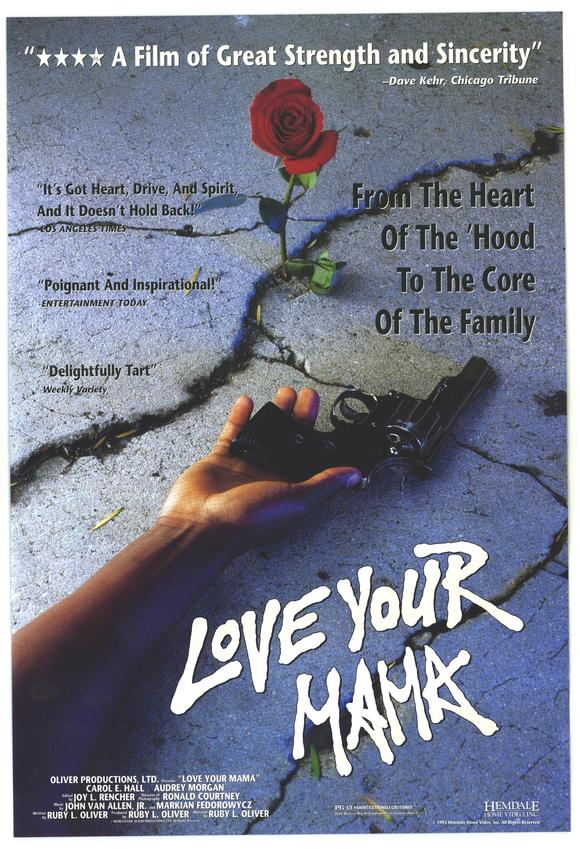 In LOVE YOUR MAMA, Audrey Morgan plays Mama, a stout, big-boned, Black woman who has spent her life pulling herself, a deadbeat husband and four children up the rough side of the mountain, but through it all, she maintains her faith in God. LOVE YOUR MAMA does not enlighten or entertain. Like a 45-speed record set at 33 rpm's, LOVE YOUR MAMA drags on and on at a punishing pace.

Written and directed by Ruby L. Oliver, LOVE YOUR MAMA is a thickly cliched movie that tells the tired and predictable story of a Black family struggling to make it in Chicago. Audrey Morgan plays Mama, a stout, big-boned woman who has spent her life pulling herself, a deadbeat husband and four children up the rough side of the mountain. She endures one family crisis after another, but through it all, she maintains her faith in God. Sam, the father, is a womanizing alcoholic who abruptly quits his job in protest of working for the “White man.” However, he insists that his wife go out and find a job to support the family. Wren, the oldest son, is a car thief who teaches his younger brother, Willie, the business. Leola, the oldest daughter, disappoints Mama when she gets pregnant in her senior year in high school. Finally, Lois, the youngest child, is little more than a smart-mouthed, sassy little girl who gets away with talking back to adults. As if this isn’t enough for any mother to endure, Sam gives Mama a venereal disease, Wren gets shot after botching stealing a car, and Leola is considering having an abortion.

LOVE YOUR MAMA does not enlighten or entertain. While the cinematography is good, the acting is mediocre at best. The movie brings no glory, satisfaction, or solutions to anyone; it simply tells what has been told more times than there are hours in a decade.