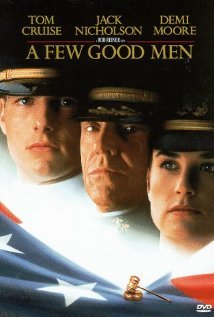 Starring Tom Cruise and Jack Nicholson, A FEW GOOD MEN is a powerful military courtroom drama about two determined individuals who are locked on a collision course that will destroy the weaker of the two. The film offers challenging performances and superb direction. Regrettably, there is an abundance of foul language and a scene of a man committing suicide.

(LLL, V, A/D, Ab) Authority and military discipline is questioned in this film with: approximately 36 obscenities & 7 profanities; man commits suicide by placing gun in mouth; a brief scene of disorderly behavior brought on by drunkenness; and, negative caricatures of Christianity.

A FEW GOOD MEN is a powerful courtroom drama that asks: How important is the truth? Is it more important than saving lives? Is it worth risking your career? These questions must be answered by two determined individuals, one, a power-hungry Marine colonel (played by Jack Nicholson), and the other, an undisciplined lawyer (played by Tom Cruise), who are locked on a collision course that will destroy the weaker of the two. The plot develops around the mysterious death of a young Marine. Two marines are accused of murdering him during an unsanctioned disciplinary action known as a “Code Red,” a brutal Marine tradition designed to drill a rigid “Code of Honor” into recruits (whereby they learn to respect the chain of command more than their own lives).

A FEW GOOD MEN forces us to analyze our own perceptions of truth, honor and justice. The Colonel’s priorities are wholly different from the lawyer’s, who has no comprehension of the brutality of war. The film offers challenging performances and superb direction. Regrettably, there is an abundance of foul language and a scene of a man committing suicide. This is not a movie for children, since the issues would be difficult for them to understand.