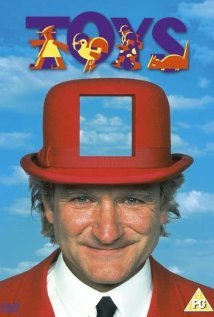 After President Kenneth Zevo dies in the movie TOYS, his son, Leslie (Robin Williams) and his army general brother, Leland, vie for control of the Zevo Toy Company as to what kind of toys will be made: happy, wind-up toys, or destructive, military toys. TOYS, despite it's intriguing title, turns out to be a poorly crafted movie with a confusing storyline and unconvincing acting.

(H, LL, V, S) Dadaism and pacificism is mixed in this film with roughly 12 obscenities & 5 profanities; slapstick violence with toys fighting each other; and, implied fornication & sexual innuendo.

After President Kenneth Zevo dies in the movie TOYS, his son, Leslie (Robin Williams) and his army general brother, Leland, vie for control of the Zevo Toy Company. At first, Leland has control and labels increasing areas of the company as “Restricted.” Finally, after much of the toy factory is taken over by Leland’s secret project, Leslie and Alsatia find a way to get into the mysterious area. Leslie discovers that all kinds of military toys are being made, and that Leland has even brought in children to learn to operate the insidious and lethal toys. Leslie is upset and tries to stop his uncle. A final showdown takes place between the happy, wind-up toys and the destructive, lethal toys, including Leland’s tanks and helicopters.

TOYS turns out to be a confused, poorly crafted movie. The sets, with their enormous, colorful toys, including many that are functional, provide some interest, but because the film focus is so obscure, and the storyline so befuddled, they come across as “hokey” and out-of-place. Even Robin Williams’ acting contributes little to TOYS. In fact, Williams and Joan Cusack (his demented sister) appear ridiculous and totally unconvincing, which is probably the director’s fault. TOYS also seems to be saying, “Make peace not war,” which makes it a message movie as well. Perhaps the message in TOYS ought to be, “When I was a child, I spoke as a child, I understood as a child, I thought as a child: but when I became a man, I put away childish things” (I Corinthians 13:11).

Audience: Children over twelve (but not really a child's movie) & adults