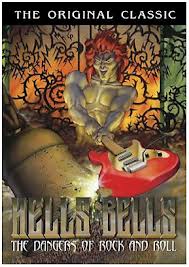 HELL'S BELLS: THE DANGERS OF ROCK 'N' ROLL is a powerful five-part witnessing and apologetic tool for anyone involved in or coming out of what may be the most powerful American cult.

(B, C, NA, O, Ab) By nature of its subject, HELL'S BELLS contains graphic examples of the blasphemous and amoral perspective of rock music which may be upsetting to some people. However, there is no nudity, and the sexual aspect of rock is dealt with in the most tasteful fashion possible.

HELL’S BELLS: THE DANGERS OF ROCK ‘N’ ROLL is a powerful presentation by Reel to Real Ministries. To be sure, Christian perspectives on rock music are a dime a dozen, as many preachers have turned in elaborate (and sometimes contradictory) analyses on the subject. HELL’S BELLS, however, goes beyond merely presenting unsavory details of the lifestyles and habits of rock performers by using these facts to present a coherent picture of the spiritual dimension and philosophy of rock music, and then critiquing it from a biblical perspective. Logical, provocative and innovative, HELL’S BELLS is the definitive work on the subject.

The unique format of HELL’S BELLS consists of five separate programs: The Power of Music, The Roots of Rock, The Fruit of Rock (Violence, suicide, drugs and sex), The Fruit of Rock II (Rebellion and the Occult), and The Axe Falls (The Great Choice – God or Self). Although designed to be viewed in five successive sittings, most viewers find HELL’S BELLS so compelling that they eagerly sit through the whole three hours at once. HELL’S BELLS is a powerful witnessing and apologetic tool for anyone involved in or coming out of what may be the most powerful American cult.

Audience: Older teenagers and adults; however, it could be shown to younger teens involved in rock culture with parental guidance and supervision.