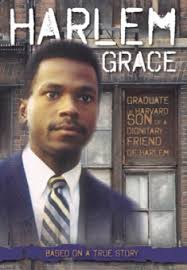 In HARLEM GRACE, Joe Holland graduates from law school and returns to Harlem to help address the social, economic and spiritual needs of his fellow African Americans. HARLEM GRACE begins as Joe Holland (Michael Walker) waits for a bus to take him from Harvard to New York City. He passes out Gospel tracts as a Gospel choir sings praise songs on a Harlem street. Joe sees Harvey (Michael Broughton) rummaging in trash cans across the street and invites him to take a shower in his apartment. Joe sets up a homeless shelter in the basement of a Pentecostal church. From Romans 12:1-2, he exhorts the men to let God transform their minds. In the movie’s climactic scene, Joe invites Harvey’s wife, Tammy (Virginia Woodruff), to meet Harvey in an attempt to effect marital reconciliation. Harvey tells Tammy he has invited God into his life. The movie concludes with a stirring resolution scene in New York’s Central Park.

Crisply acted and directed, HARLEM GRACE is an uplifting, redemptive film that depicts the gritty, daunting obstacles confronting a man motivated by the love of Jesus Christ to help homeless men get back on their feet with tough love and hard work in 1990’s Harlem.

(CCC, Re, V, D) Strong Christian worldview with strongly redemptive elements; no profanities; no obscenities; man hits man with his fist; and, no sex.

A first-time film from a first-time director, working with a low budget, HARLEM GRACE is short and tight. Its 31 minutes presents a compelling true story chronicling the God-led efforts of a selfless Harvard law school graduate to better the wasted lives of hundreds of his fellow African Americans through God’s grace and hard work.

HARLEM GRACE begins as Joe Holland (Michael Walker) fills out mail address-forwarding cards at a table near Harvard Yard as he waits for a bus to New York City. Later, he passes out Gospel tracts to passers-by as a Gospel choir sings praise songs on a Harlem street. Joe challenges them to ask Jesus Christ to change their lives, but the people refuse. He sees a man, Harvey (Michael Broughton) rummaging in trash cans across the street, and invites him to take a shower in his apartment. When he leaves, Harvey steals all of Joe’s expensive shampoo. Joe visits a homeless shelter and looks over a sea of cots, in a futile attempt to find Harvey.

Then, he meets Harvey by chance on the street. Joe confronts him about the theft of his valuables. Harvey says that all he wants to do is to get high and admits that once he found that he could not sell Joe’s cosmetics, he discarded them on the next block. Joe challenges Harvey to stop getting high on crack cocaine, and Harvey slugs him in the stomach. Sometime later, Joe takes a call from Harvey in jail. In the visiting room, Harvey lies about the circumstances of his arrest, saying that he only sold baking powder to the undercover cop. He pleads with Joe to bail him out for Christmas. In his first act of tough love, Joe refuses, telling Harvey that perhaps jail is the best place for Harvey at the present moment.

Joe goes into a Pentecostal church and asks the pastor to let him set up a homeless shelter in the church’s basement. At first, she refuses, but Joe persists, reciting a verse of Scripture (Matthew 25:35) on the wall of the pastor’s study where Jesus commends the good servants who welcomed the strangers. A year later, flanked by Harvey, Joe stands by the church basement on the shelter’s opening day, when dozens of angry homeless men clamor to be among the ten who are admitted. That first night, someone steals Joe’s watch, a sentimental favorite because it was a gift from his father. He confronts the dozen men in the Bible study he leads, but no one confesses to having stolen it. Nevertheless, from Romans 12:1-2, he exhorts the men to let God transform their minds.

Harvey continues to test Joe’s patience and adherence to the shelter’s rules. He takes a job before he has completed the shelter’s character changing program and gets fired. Now, Joe must decide whether or not to readmit Harvey. He tells his girlfriend, Leslie (Cheryl Gaskin), that he has decided to let another resident sleep in Harvey’s bed. “Harvey needs grace right now. He doesn’t need you to enforce the rules,” she continues. Chastened, Joe waits for Harvey at the shelter’s front door. Late that night, Harvey bangs on the door, hours past the shelter’s curfew. Joe confronts him, but gives up his own bed to Harvey. In the movie’s climactic scene, Joe invites Harvey’s wife, Tammy (Virginia Woodruff), to meet Harvey in an attempt to effect marital reconciliation. After a botched start, Harvey tells Tammy that he has invited God into his life and is a changed man. She grasps his hand in a token of her forgiveness. The movie concludes with a stirring resolution scene in New York’s Central Park.

With tight directing, no gratuitous scenes and good editing, HARLEM GRACE moves forward seamlessly from beginning to end, keeping the audience interested. As he faces successive obstacles in his quest to “give something back” to Harlem, Joe’s integrity rises to almost mythic proportions as the movie progresses. When Joe informs Harvey in the final scene that he has started the first inner-city Ben and Jerry’s ice cream store, his saintliness almost rises off the chart. Who is this guy, anyway? How does he muster the altruism to spend his savings on the homeless, when he receives no apparent material reward? The answer is that his outstanding entrepreneurial social service got him noticed by the Governor of New York, who appointed Joe that state’s Housing Commissioner in 1994.