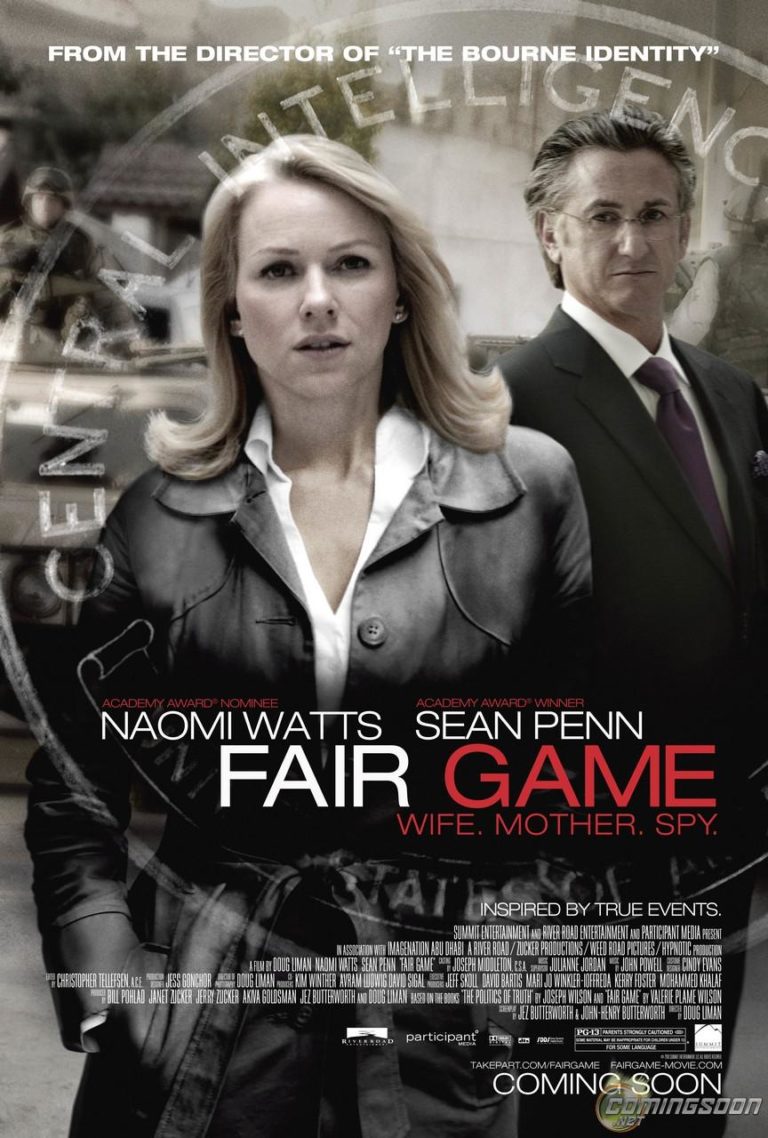 FAIR GAME tells the real-life story of former U.S. ambassador Joe Wilson and his wife, CIA analyst and former undercover operative, Valerie Plame, during the Iraq War. It tells how they allege they were ignored by the Bush administration when they reported Iraq was not acquiring uranium for nuclear missiles. As people may recall, Wilson struck back through the media, exposing what he claims were the government’s lies, but then found that his wife, a CIA analyst, was considered “fair game,” and so had her identity exposed and, allegedly, her life endangered. Wilson persists in his quest for his view of truth and justice. He also encourages his wife to stand up for herself.

FAIR GAME is powered by terrific performances by Sean Penn and Naomi Watts, both of whom could easily end up with Oscar nominations. In fact, Watts delivers one of the best performances of the year. That said, the movie takes the couple’s side so strongly and completely that it winds up making the viewer wonder what really happened. In fact, other sources and contrary evidence cast lots of solid doubts on the story the politically correct Wilsons tell.

(RoRo, PCPC, RHRH, B, LL, V, A, D, M) Strong Romantic worldview with politically correct content that, according to other reliable sources, seems to revise and distort history, including real-life Bush Administration, State Department and CIA officials portrayed by actors – are depicted as lying to force the Iraq war to occur and destroy the reputation of two lead characters, the real-life figures Joe Wilson and Valerie Plame, while leaving Iraqi intelligence sources to die unjustly, plus some light moral elements due to main character’s deep passion to tell the truth even if it costs him his job and life and married couple shown arguing strongly due to stress, but they always make peace and marriage overall is portrayed in a strong, positive, loving fashion; at least 30 obscenities (including two “f” words) and three GDs; light violent content; no sex; no nudity; casual drinking shown at dinner parties; male lead smokes cigars in a few scenes; and, lying, alleged slander and alleged cover ups.

FAIR GAME tells the real-life story of former U.S. ambassador Joe Wilson and his wife, undercover CIA operative Valerie Plame, and how they allege they were ignored by the Bush administration when they reported that Iraq was not trying to get uranium for nuclear missiles.

As readers may recall, Wilson struck back through the media, exposing what he claims were the government’s lies, but then found out that “they” retaliated against his wife, a CIA analyst, who was considered “fair game” – with her identity exposed and, allegedly, her life endangered. Wilson will not stop in his quest for his view of truth and justice. He leads his wife to stand up for herself as well.

The movie tries to portray Wilson’s quest as leading to one of the most shameful revelations of the Bush administration and the couple’s eventual vindication, but it ignores the fact that even many Democrats, including Bill Clinton, supported the Bush Administration’s claims about Saddam seeking yellowcake nuclear materials and WMDs during the debate leading up to the Iraq War. Ultimately, the movie offers compelling drama but discerning moviegoers will want to take heed that, as a film starring noted Hollywood ultra-liberal bomb-thrower Sean Penn, it very likely is twisting many of the facts to serve a liberal, politically correct agenda.

That said, FAIR GAME is powered by terrific performances by Sean Penn and Naomi Watts, both of whom could easily end up with Oscar nominations, In fact, Watts serves up what may be one of the best female performances of the year so far.

The complexities of the alleged scandals leading up to the Iraq war decision and the heavy political aspect make FAIR GAME a movie for serious-minded viewers. However, the movie loses a star in its quality rating because it takes the couple’s side so strongly and completely that it winds up making the viewer wonder what really happened amid the highly contentious pre-war decision process – a process that was not, according to other evidence, nearly as cut and dry as FAIR GAME makes it out to be. For instance, apparently Saddam Hussein did indeed try to get yellowcake uranium from Nigeria, just as President Bush said in one of his most important speeches. For some of the other information appearing to contradict much of the Wilsons’ story in this movie, please see “When, Why Joe Wilson Outed Valerie Plame” on the Sweetness & Light website at http://sweetness-light.com/archive/when-and-why-joseph-c-wilson-iv-outed-valerie-plame. Of course, you can read the two books by the Wilsons for their side of the story, but, in light of the evidence, their story is suspicious. Especially considering they supported John Kerry’s 2004 campaign against Bush, perhaps in an effort to get Joe Wilson appointed Secretary of State by Kerry if he had won instead of Bush.