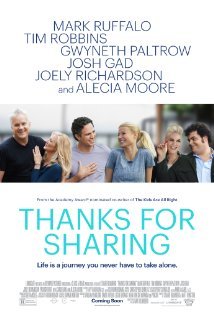 THANKS FOR SHARING follows three men, Adam, Neil, and Mike, who attend a 12-step program to treat their sexual addition. Together, they work through their addictions. Adam works on a new relationship. Neil finally admits his problems and tries to solve them. Finally, Mike works on unifying his family.

Overall, THANKS FOR SHARING has a strong moral worldview with some Christian content. For example, the 12-step program takes place in a church, and there are positive references to God and prayer. Also, the movie stresses looking at your own sins rather than the sins of others and helping other people change. This positive worldview is marred by the pluralistic idea that any religion is okay. The movie also contains lots of strong language and some strong lewd content and nudity that could have been deleted. THANKS FOR SHARING has very good acting, along with several truly poignant, touching scenes. It also clearly shows the destruction temptation can bring. However, there are too many characters and storylines fighting for attention. THANKS FOR SHARING could have been better and cleaner. Extreme caution is advised.

(BB, C, Pa, FR, LLL, VV, SS, NN, AA, DD, M) Strong moral worldview with some Christian, redemptive elements including God is mentioned, movie opens with man on his knees praying, character says that God arranged a meeting, talks about the supernatural and “higher power,” meetings take place in a church fellowship, man tells other man he must pray, talks about focusing on your own sin before judging others to really love them but also help them, movie stresses helping others through their addiction, movie stresses addictions are bad, and movie shows the ramifications of sin, but marred by some relativistic thinking where any religion is okay if it helps you get through your addiction and one man meditates; 82 obscenities (including more than 55 “f” words) and 15 profanities (including some strong profanities), plus vomiting; father and son get in a fight, and mother is pushed, man gets hit by door, man starts hitting a wall down and destroys the wall, girl starts slapping herself and overdoses on pain meds; strong sexual content but rebuked includes fornication with a prostitute but rebuked, man looks under women’s skirt, implied self abuse but rebuked, suggestive movements, fornication outside of marriage, kissing, very crude dialog, but all sexual addiction is rebuked and characters strive toward purity outside of a committed relationship; upper female nudity, females in underwear, upper male nudity, and men in underwear; drinking and mentions of recovery from alcoholism; no smoking and no drug use but there are mentions of recovery from drug addiction; lying but rebuked and admitted and family fights but comes together at the end.

THANKS FOR SHARING follows three men who attend a 12-step program to treat sex addition. THANKS FOR SHARING has a strong moral worldview regarding recovery from addiction, with some Christian, redemptive elements, but it also has an “any religion will do” mentality and crude sexual content that should and could have been deleted.

Adam has gone five years sober without giving in to his sexual addiction. Even though everything in the city around him promotes sex: the ads with girls in underwear, women wearing short dresses, etc. When Adam meets Phoebe, he has to learn how to balance relationship with being careful intimately, in order for him not to go back into “a dark place of addiction.” Adam’s sponsor, Mike, has had problems with both alcoholism and sex addiction, but he too has been sober for years.

Mike has a beautiful wife and loves mentoring people out of their addictions. When Mike’s son, Danny, comes home unexpectedly, Mike doesn’t know if he should trust him. Having gone through recovery from a drug addiction himself, Danny is known to have brought trouble to his parents. This time though, Danny swears he’s sober, even though he’s not in a program.

Also in the group is Neil, who’s just started the program because he had sexual charges against him. Having no desire to change, Neil lies and makes up excuses, but when he’s fired from his job, he decides to take action. As Neil’s sponsor, Adam tells Neil he must “pray every day, never use the subway or the internet, and go to a meeting every day for 90 days.” When Neil protests about praying, Adam says he won’t sponsor him if he doesn’t. Neil not only makes great progress, he also befriends another recovering addict, Dede, who has never been just friends with a man. Together, they help each other not succumb to their temptations.

THANKS FOR SHARING has a strong moral worldview. The 12 step program featured in the story takes place in a church, with many references to God. Also, the movie stresses looking at your own sins rather then the sins of others and helping other people change. Dede talks to Neil about a higher power, but no one ever says Jesus is the answer. Thus, any religion seems to be okay. So, while Adam prays, Mike meditates. Finally, though it’s strongly rebuked, the movie does show sex with a prostitute and other sexual acts, so extreme caution is advised.

THANKS FOR SHARING has some good acting with poignant scenes. It shows the destruction of temptation. The sound in the movie was problematic. Also, because the movie had multiple lead characters, the movie has too many storylines. This could have been edited to focus on one character’s story, with the other stories playing second fiddle to the main one.

Watch THANKS FOR SHARING: