"They Have Some Bones To Pick" 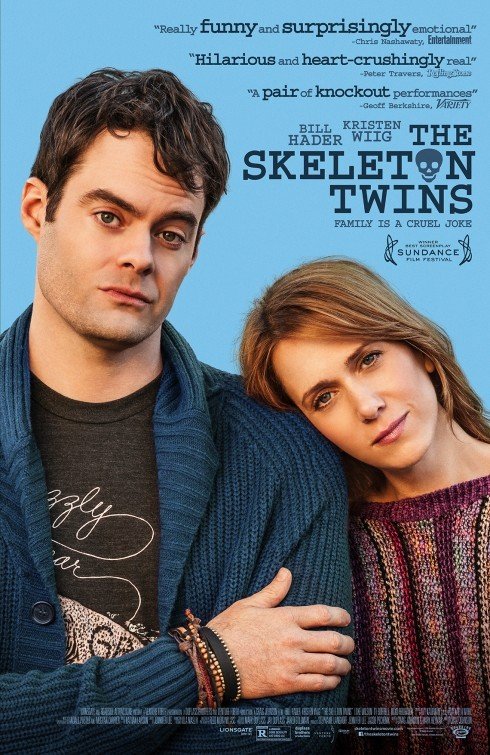 THE SKELETON TWINS is a moving, darkly comic story. It follows the lives of Maggie and Milo. Maggie and Milo are long-estranged siblings forced to come together after 10 years when Milo attempts suicide and the hospital calls Maggie. Maggie brings Milo back to their hometown to stay with her and her husband, Lance. Milo is a failed homosexual actor living in Los Angeles, while Maggie is having problems fulfilling with her desire to have a traditional, happy married life with Lance. As the two siblings reconnect, the movie exposes some secrets about their family’s past and Milo’s past.

THE SKELETON TWINS has a unique storyline, driven by impressive, moving performances from Bill Hader and Kristin Wiig as the brother and sister. Their characters veer from bickering but funny to caring but caustic. THE SKELETON TWINS has positive and negative messages. For instance, the importance of family is stressed but it’s also clear the siblings are incapable of creating their own functional family. THE SKELETON TWINS also contains lots of strong foul language and some lewd, mature content. So, extreme caution is advised.

(PaPa, Ro, HoHo, BB, C, LLL, VV, SS, A, MM) Mixed pagan worldview with negative and positive elements, including some Romantic content, in a darkly comic story about a troubled twin brother and sister trying to overcome two recent suicide attempts and the fact their father actually committed suicide when they were young, and some overt homosexual references regarding the brother, who’s revealed to have been molested by a teacher, so movie seems to imply (unconsciously perhaps) that homosexual molestation is the cause of the brother’s psychological problems and lifestyle, plus some moral, redemptive elements presenting a positive portrayal of the importance of family and forgiveness, including mother of adult protagonists is mocked for her silly, superficial New Age beliefs; at least 70 obscenities and profanities (including some “f” words) plus some passing gas jokes; strong violence includes a man climbing into a bathtub after slitting his wrists with the water turning blood-red as he lies in it, man’s sister stops contemplating suicide by pills when she gets the call about her brother’s suicide attempt, woman considers suicide by drowning, talk of father’s suicide; overt references to homosexuality (including man confronts homosexual pedophile who abused him) and depicted clothed adultery involving a woman who finally admits to her husband about her illicit affairs, but her admission doesn’t save their marriage, plus homosexual character’s cross dressing on Halloween is played for laughs; no nudity; alcohol use; no smoking but man and woman get high on nitrous oxide in the office of the dentist where she’s employed; and, strong miscellaneous immorality includes bickering, condescension but eventually overcome, and woman has lied to her husband about secretly taking birth control pills though they had agreed to start a family.

THE SKELETON TWINS is a moving, but darkly comic story of a troubled brother and sister who are brought together after a decade apart when he tries suicide and she’s called to help him despite the fact she nearly attempted suicide herself secretly at the exact same time. It has a mixed pagan worldview with positive and negative elements, plus lots of strong foul language.

The movie follows the story of Maggie (Kristin Wiig) and Milo Dean (Bill Hader). Maggie and Milo are long-estranged siblings forced to come together after a decade when Milo attempts suicide, and she’s the person called to check on him. A homosexual, Milo is a failed actor in Los Angeles, while Maggie has married Lance (Luke Wilson), a loving man whom she nonetheless cheats on and hides the fact she’s taking birth control when they agreed to try to have children.

Maggie’s darker secret is that she’s so unhappy, she was about to swallow pills to kill herself when she got the phone call about Milo. She brings Milo back to their small-town New York hometown to recover and get his emotions together. As they try reconnecting, they veer between fighting and bonding before finally truly connecting in an uplifting lip-syncing scene to a 1980s hit song.

While Maggie engages in an affair with a scuba-diving instructor, Milo tries to revisit a high school teacher (Ty Burrell), who abused Milo when he was his student. Milo initially acts as if his homosexuality has nothing to do with his sadness and that his interest in seeing the teacher is romantic. It slowly becomes clear that the teacher molested Milo. In fact, Maggie severely scolds Milo for having anything to do with the man, saying he ruined Milo’s life. In other words, she has some bones to pick with Milo about this man.

SPOILER ALERT:  Eventually, Milo works up the nerve to confront the teacher, who now has a long-term girlfriend and preteen son. Because of that family, Milo doesn’t force him to admit his actions publicly, but he does make it clear how badly his life was affected by the teacher. He also warns him that he better not be molesting any other children. Also, Milo sabotages Maggie by implying to Lance that she’s hiding things from him. This leads to her admitting her affairs and her use of birth control to her husband. Though Lance leaves her, Maggie soon realizes it was better to be honest than continue living a lie. She does start over single, but also ends the affair with her scuba teacher. END SPOILER.

THE SKELETON TWINS has an original, moving storyline, driven by impressive performances from SATURDAY NIGHT LIVE veterans and former castmates Bill Hader and Kristin Wiig. Its characters are well drawn and their lives, while often sad, are believable. Their characters veer from bickering but funny to caring but caustic.

THE SKELETON TWINS has positive and negative messages. The positive messages include a portrayal of the importance of positive family relationships and forgiveness as well as rebukes of adultery and child molestation. However, the movie also contains lots of strong foul language and some lewd content. In addition, the homosexual brother never overtly realizes that homosexuality itself is part of his problems, not just his father’s suicide and the sexual abuse that “ruined” his life. Consequently, media-wise viewers are more likely to pick up on the movie’s anti-homosexual implications than other moviegoers. Finally, although the movie mocks the superficial New Age beliefs of Maggie and Milo’s mother, the idea of Milo cross-dressing for Halloween is played for laughs. Ultimately, therefore, MOVIEGUIDE® advises extreme caution for THE SKELETON TWINS.