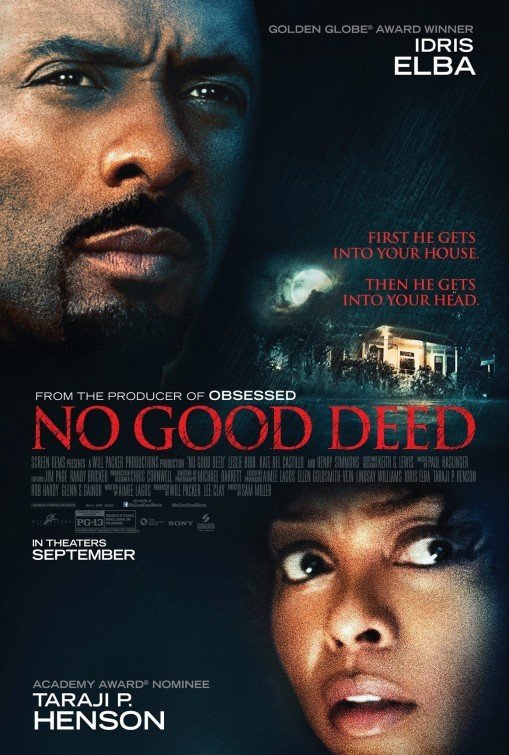 NO GOOD DEED is a tense thriller about a mother defending her home and children against a vicious, murderous escaped convict. After losing his bid for parole, Colin Evans kills two guards on the bus back to prison and escapes. He steals a van and follows his ex-girlfriend back to her house. There, he kills her after finding out she’s seeing another man. On the road, Colin crashes his van in a big thunderstorm. He finds refuge at the home of a young mother whose husband is away. When the mother’s female friend shows up, Colin’s true colors eventually come out.

NO GOOD DEED is well filmed and acted, with a lot of suspense and action. It builds to an exciting, satisfying conclusion. Idris Elba stands out as the psychotic convict. However, the movie has a Romantic, feminist subtext where the heroic mother is trapped in a failing marriage. It clearly suggests the woman should never have given up her law career and become a stay-at-home mother. NO GOOD DEED also has some strong foul language and violence. So, extreme caution is advised.

(PaPa, RoRo, FeFe, BB, LL, VV, S, N, A, D, MM) Strong mixed pagan worldview with Romantic, feminist elements that implicitly denigrates the idea of just being a “stay-at-home mother” but a mother defends her home and children against an evil criminal; 15 obscenities (including two “f” words), three strong profanities, two light profanities; strong violence with some blood includes villain shoots two prison guards to death after hitting one of them and grabbing his gun, woman hits villain with objects, villain strangles woman to death and then viciously beats her with an object (the audience doesn’t see her body as he hits her), woman stabs villain, villain shoots another police officer dead, villain fatally hits character with a shovel, woman sprays villain with fire extinguisher, an intense struggle occurs over gun; villain forces married woman to stand in shower with him as he washes fire extinguisher foam off his naked body, married woman’s friend flirts with villain before he reveals himself and he with her, dysfunctional marriage, a sexual comment with innuendo; upper male nudity and female cleavage; alcohol use; smoking; and, lying, deceit, prison escape, dysfunctional relationships.

NO GOOD DEED is a tense thriller with an exciting finish, in a story about a woman defending her children against a criminal thug. However, it contains some strong violence, foul language and dysfunctional relationships with Romantic, feminist elements. So, extreme caution is warranted.

The movie opens with a prison convict, Colin Evans, trying to get parole for manslaughter. The parole board has to vote unanimously for Collin to be released and one of the members strenuously objects. In fact, he calls Collin a vicious narcissist who may be guilty of murdering several women.

On the way back to prison, Colin escapes by creating a nosebleed and shooting the two guards dead in the process. Later, after stealing a van, he follows his ex-girlfriend to her house. There, he strangles her to death because she never even opened the letters he sent to her from prison. She’s also been seeing someone else.

Colin accidentally crashes the van in a thunderstorm. He makes his way to the house of Terri, a mother with two young children. Terri’s husband, Jeffrey, is away on a golfing trip with his father for his father’s birthday. There is clearly some tension between Terri and Jeffrey as Jeffrey doesn’t seem to be as involved as Terri in raising their children.

Colin pretends to be a stranded motorist. Eventually, Terri becomes comfortable enough to let him into the house as he waits for the tow truck. Then, however, Terri’s friend Meg, an outgoing blonde woman, appears. Meg starts flirting with Colin, but he begins to arouse her suspicions. Colin reveals his true colors, and Terri has to defend herself and her children against him.

NO GOOD DEED is well filmed and acted, with a lot of suspense and action. It builds to an exciting, satisfying conclusion. Idris Elba stands out as the psychotic convict. Viewers will cheer whenever Taraji P. Henson (formerly of TV’s PERSON OF INTEREST) gets the better of him.

However, the movie has a Romantic, feminist subtext where the heroic mother is trapped in a failing marriage. The movie clearly suggests that the woman should never have given up her law career and become a stay-at-home mother. NO GOOD DEED also has some strong foul language and violence, but it does show the villain getting his comeuppance. So, extreme caution is advised.