FOR SUCH A TIME 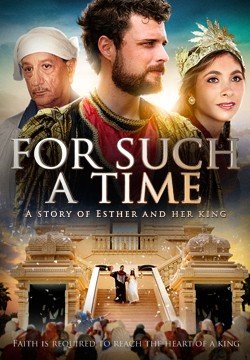 FOR SUCH A TIME tells the story of Queen Esther of the Bible. King Xerxes is hosting a feast. In his inebriated state, he calls for his wife Queen Vashti that all his guests might gaze on her beauty. When Vashti refuses to come, the king’s counselors advise him to give her crown to another woman more worthy. The king chooses Esther to be his new bride. However, an evil advisor decides to rid the kingdom of Jews. Once news of this reaches Esther, she prays and has others to pray on her behalf. She trusts God and risks her life to go before the king to prevent the killing.

FOR SUCH A TIME has some production problems, including some bad audio. Also, the costuming, staging and sets are too modern. However, the movie authentically represents Jewish life. FOR SUCH A TIME warrants caution for younger children due to the depiction of a hanging and the suffering and passion of Jesus Christ. That said, the worldview is a very strong Christian one, with positive affirmations of Scripture, love, faith, and prayer.

(CCC, BBB, V, N, AA, M) Very strong Christian, biblical, moral worldview about the biblical story of Esther, the coming of the Messiah is a central theme shared by Esther, prayer and love are promoted, Esther intercedes and is willing to sacrifice herself for God’s chosen people the Jews; no foul language; some violence includes a hanging, scars on Jesus’ back, hands pierced with nails, crown of thorns causes Christ to bleed, Haman hanged; no sex; upper male nudity as king comes up out of water; king is drunk at his feast; no smoking or drugs; and, betrayal, deception, cultural/religious persecution of Jews, racism, greed, and revenge, but rebuked.

FOR SUCH A TIME is a video telling the dramatic story of Queen Esther of the Bible.

It opens with hands opening the Bible and the voice of a narrator saying that just as Esther means “hidden,” so is the hand of God hidden all throughout the book of Esther. King Xerxes is hosting a feast and is full of merriment. In his inebriated state, he calls for his wife Queen Vashti that all his guests might gaze on her beauty. When Vashti gets this word from the king, she is indignant and refuses to come, as she is tired of being lusted after by his guests in their drunken stupor. She is also going to her own feast. When the message is relayed to the king, he is outraged and asks his counsel what disciplinary action to take. His counselors advise him to take Vashti’s crown and give it to another woman more worthy.

Mordecai tells his beloved cousin, Hadassah (Esther), that she will be taken by the king, and they are heartbroken. Mordecai spreads his shawl over her as in true Jewish custom, and prays for his young cousin he’s raised as his own daughter. King Xerxes approves of Esther, and although she does like him, she is grieved because he is a heathen and does not believe in the God of Israel. The only thing she can do is put her trust in God.

The king chooses Esther to be his new bride and they are a happy couple. However, Haman decides to rid all the providences of Jews because of his great disdain for Mordecai. Haman approaches a preoccupied King Xerxes, who grants his permission to carry out this edict. Once news of this edict reaches Esther, she prays and has others to pray on her behalf. Then she risks her life to go before the king to request to hold a banquet for him and Haman.

When Esther’s first request is granted, during the feast she makes her real petition known and requests her life and the life of her people and that justice be served toward Haman. When King Xerxes learns the truth of Haman’s planned attack on Jews, he is outraged and has Haman hung on the gallows that Haman suggested he have built for Mordecai.

After the hanging of Haman, the king honors Mordecai and gives him his signet ring. Two years later, the queen and king have a son. The Jewish people are celebrating Purim and the anniversary of what King Xerxes did to save the Jews. Esther rejoices and even gets her pagan husband to celebrate with her in a dance of praise to God for His deliverance.

FOR SUCH A TIME has some production problems. For example, there were a number of audio issues, including some slight distortion during the king’s lines. Also, the costuming, staging and sets were all far too modern. However, several strong positives include the movie’s promotion of the importance of prayer, its praise to the Jewish culture and the authentic representation of Jewish life throughout the movie. During the end credits, Jeffrey Scallon (King Xerxes) and Alyse Nicole (Esther) explain what it means for Jews to accept Christ as their Savior.

FOR SUCH A TIME warrants caution for younger children due to the depicted hanging of Haman as well as the movie’s depiction of Jesus being whipped and scarred, His bloodied temple under the crown of thorns, and his hands being pierced with nail. Of course, the worldview is a very strong Christian one. The coming of the Messiah and Christ’s sacrifice are central themes, as is the power of prayer. FOR SUCH A TIME also has very strong biblical, moral themes. Bible passages are spoken and narrated, and major themes are love and faithfulness, as well as faith in God.

Watch FOR SUCH A TIME: