THE BOY NEXT DOOR

"A Hunk of Trouble Next Door" 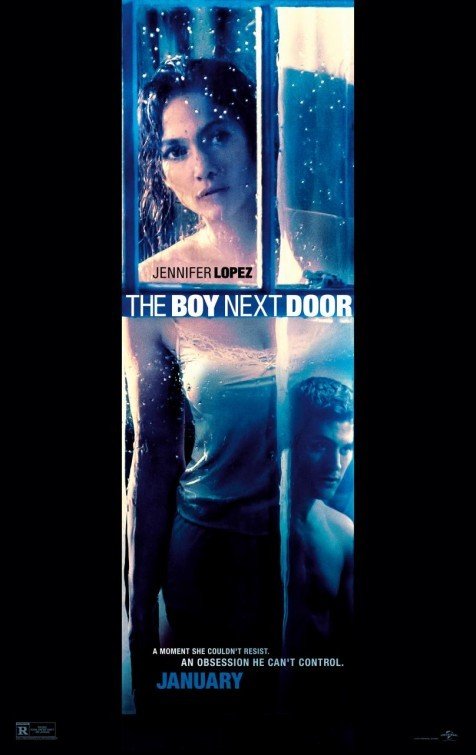 THE BOY NEXT DOOR stars Jennifer Lopez as Claire, a high school teacher struggling through a painful transition after her divorce. Her life includes her teenage son, Kevin, who’s handling his parents’ breakup as well as can be expected. There’s also cheating ex-husband Garrett, who’s trying to get his failed marriage restarted. Into this situation steps Noah, an attractive but troubled 19-year-old who befriends Kevin and is clearly interested in Claire. Claire succumbs to this temptation, but when she realizes her mistake and tries to break things off, Noah becomes increasingly violent.

THE BOY NEXT DOOR does the suspense thriller some justice. The production values and performances are professional. Jennifer Lopez has matured and delivers a good performance. However, the movie suffers from underdeveloped characters and a formulaic, abrupt ending. The filmmakers do insert some positive redemptive messages. They show how a moment of indiscretion and lust can bring very bad consequences, and that a family together is better than a family apart. However, THE BOY NEXT DOOR is marred by excessive lewd, violent content, so it’s unacceptable for media-wise viewers.

Current AMERICAN IDOL judge Jennifer Lopez’s latest foray into movies demonstrates that beyond her skills as a crooner, singer and dancer, her talent as an actor has come into its own. Sadly, THE BOY NEXT DOOR is an immoral, flawed movie. It also contains explicit and sometimes violent content.

Lopez plays Claire Peterson, a high school teacher who has recently divorced and is struggling emotionally through the painful transition. Her life includes her teenage son, Kevin (Ian Nelson), who at the moment is handling the situation fairly well as he tries to process his parents’ break up. There’s also ex-husband Garrett (John Corbett), who is himself trying to somehow pick up the pieces and get his failed marriage restarted.

Into this fragile state of affairs steps a muscled, handsome, young hunk named Noah (Ryan Guzman), who happens to move in next door to take care of his convalescing uncle, after the tragic death of Noah’s parents. Noah subtly proceeds to insert himself into Claire’s life by befriending the younger Kevin. More troublesome is the attention Noah feels toward the lovelorn school teacher, that powerful emotion called “lust.” There’s another problem with this, however. The sudden death of his parents has brought a delay in Noah’s schooling, and he’s a fifth-year senior at Kevin’s school, the same school where Claire works.

To Clair’s distress, Noah takes her change of heart very badly. As Noah begins to stalk her, Claire tries to figure out what to do next by enlisting her friend and confidant, Vicky (Kristen Chenoweth), the vice principal at Claire’s school. However, in view of what is now Noah’s evident propensity to violence, Vicky only manages to make matter even worse by putting both Claire and her in jeopardy, as the situation descends from frustrating, to psychologically obsessive, to bloody deadly.

THE BOY NEXT DOOR no doubt suits the thriller genre well. Regrettably, what can distinguish a good thriller from a bad one is that it isn’t enough to simply include all the elements present in that genre according to a formula because formula can only get a story so far, and only so far is how far this movie gets. It does help that Jennifer Lopez’ acting has certainly improved. Also, Ryan Guzman as the young man with a very troubled past does a good job turning on and off the demon hiding behind the innocent face. Sadly, poor direction makes his psychological motivations inconsistent with his actions and peppers the movie with formulaic plot devices, unimaginative action sequences, and the use of sex as a gratuitous voyeurism.

In addition, Ian Nelson does a good job as the teenager in the middle of the family wreck, and Kristen Chenoweth is fabulous as the firecracker school vice principal trying to help Claire. John Corbett lacks intensity in his role as the father and ex-husband trying to get back into the family’s good graces. Other players, such as Lexi Atkins, Jack Wallace, and Hill Parker do no harm in their respective performances.

THE BOY NEXT DOOR does have some redemptive value in that the main characters recognize the value of the traditional family unit and work to restore it. The movie also shows the dangers in letting unbridled passion devoid of sober consideration rule the heart. In addition, various elements of suspense in the story certainly make the movie a mildly interesting thriller, but sadly, not enough to commend. Finally, THE BOY NEXT DOOR goes too far in its depiction of lewd, violent content, so it’s unacceptable for media-wise viewers.