"Kind of Sweet, Kind of Awkward" 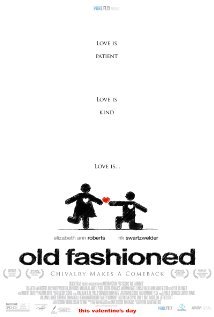 OLD FASHIONED is a romantic-drama about Clay Walsh, a single man who owns an antique shop in a small town in Ohio. When Amber, a free spirited young woman, drives into town, she finds Clay’s place and rents the apartment above his antique shop. Immediately, Amber is fascinated by the quiet and awkward Clay, who upon their first meeting states that he refuses to be alone in a room with a woman who’s not his wife. Clay, a former frat boy turned Christian, is trying to avoid the hurt and pain that he caused in his last relationship. So, he’s set up rules to protect himself. Eventually, a budding romance begins between Clay and Amber.

OLD FASHIONED is a very different type of romance movie as it explores relationships with the set purpose of marriage in mind. Though much of the movie is awkward, the worldview in OLD FASHIONED is definitely Christian: Clay was radically changed by Jesus. Though he’s not a fan of church, he quotes Scripture many times. OLD FASHIONED requires caution for some references to drinking and partying.

(CC, BB, S, A) Strong Christian worldview about protecting ones heart, staying pure, valuing marriage with several Scripture quotes and a scene in a church; no foul language; no violence; some sexual references includes a stripper shows up at a bachelor party and starts to tease the groom, but Christian character tries to stop it and convinces the groom not to go along with it, it seems like two characters cheat on each other, but it turns out that neither went through with it, brief videos of a frat boy asking college girls to pose for the camera but nothing graphic, and a joke about a character maybe being homosexual (he’s not); no nudity, but some implied nudity in the frat videos; alcohol use, including references to bar and party drinking; no smoking; and, nothing else objectionable.

OLD FASHIONED is a romantic drama about Clay Walsh, a single man who owns an antique shop in a small town in Ohio. When Amber, a free spirited young woman drives into town, she finds Clay’s place in the classifieds and rents the apartment above his antique shop.

Immediately, Amber is fascinated by the quiet and awkward Clay, who upon their first interaction states that he refuses to be alone in a room with a woman who’s not his wife. This rule comes from his “theory” of dating: a belief that modern dating is a practice of the superficial and is not a good way of finding a wife.

Clay, a committed follower of Jesus, is pressured by his secular friends to actually get out there and pursue a woman. Amber starts breaking things in her apartment just so she can call Clay to come and fix them. As they spend more time together, Clay is finally pressured into taking her out, but he says he’ll only do so if they follow his rules. This leads to many awkward “dates” of the two of them going through pre-marital counseling books.

Amber, who’s on the run from an abusive ex, is charmed by Clay’s chivalry and respect. Through conversations with others in the town, she learns that Clay used to be a frat boy in college and was incredibly popular from the party videos he made. When he found God, or as he puts it, when God found him, he put away that lifestyle. His rules stem from a past relationship that he destroyed and the desire to not make the same mistakes again. Through the relationship, Amber learns that life isn’t just following the wind as it blows. Meanwhile, Clay discovers that living a good life doesn’t mean just following a set of rules.

The romance in OLD FASHIONED is uncomfortable and awkward to watch, and it’s not entirely obvious whether this was purposeful or not. The cinematography is competent, though the general feel of the Midwest town is more claustrophobic than liberating. Amber is the highlight of the movie and expresses the pain of her past more subtly than Clay, who wears it on his sleeve. This may have been what the filmmakers were trying to do with Clay, but the audience will likely feel the same way all his friends did in the movie, mostly annoyed and frustrated.

The worldview in OLD FASHIONED is definitely Christian. Clay was radically changed by Jesus, and though he’s not a fan of church, he quotes Scripture many times. Amber’s a vague spiritualist, and she sort of comes around to Christianity, but it’s not entirely clear. The movie’s strangest part is its didactic focus on Clay’s rules, rather than the spirit of his message of staying pure and intentional while in relationships. This will likely become a disconnect with many Christian moviegoers, especially the ones that attend this movie as a date movie.

That said, the movie gets significantly better near the end in a scene where Clay’s elderly Aunt gives him a stern talking to and reveals the lack of grace, mercy and forgiveness in his life. This doesn’t loosen him up completely, but does lead to a heartwarming ending. There’s definitely something to be said about the way relationships are handled these days. OLD FASHIONED wants to bring respect and chivalry back into the equation so that relationships and, hopefully, marriages can be built on something deeper than just “feelings.” So, this movie definitely bucks against a culture of romanticism that believes in following one’s heart rather than following Jesus. While the movie doesn’t embody this message as successfully as it could have, it’s still a good message nonetheless. Caution is advised, however, for some references to partying and a bachelor party that almost starts to get out of hand.