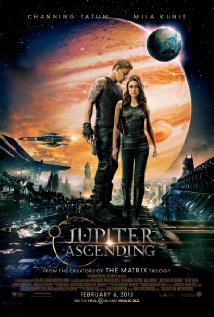 JUPITER ASCENDING is a science fiction adventure movie from the Wachowski Brothers, who made THE MATRIX. It’s about a ordinary young women who gets caught up in intergalactic fight over Earth. The movie takes place in modern times, and unknown to the people of Earth, the human race on this planet was actually seeded by powerful alien royalty over 100,000 years ago. Miller Kunis plays Jupiter, an illegal immigrant who works as a maid in Chicago. After nearly dying at the hands of some alien creatures, Jupiter finds out she’s been bestowed the title of Earth itself, and an alien royal family is bent on taking that title from her so they can harvest all the inhabitants on Earth.

JUPITER ASCENDING is a fairly entertaining sci-fi movie, with exciting action sequences and spectacle galore, but the characters lack depth, which makes it hard to feel any angst while the characters are in jeopardy. Though there are some redemptive qualities, the movie’s worldview is heavily influenced by New Age paganism. That and some other objectionable content push JUPITER ASCENDING into the unacceptable category.

(PaPaPa, FRFRFR, AcapAcap, EvEv Ab, B, C, LLL, VV, S, NN, A, MM) Very strong false religious pagan worldview influenced by New Age beliefs of reincarnation and mysticism, as well as some Darwinian elements, some anti-capitalist statements, some moral, redemptive elements exhibited in some of the characters willing to sacrifice everything to save Earth, and other characters find redemption; 14 obscenities and 11 profanities; action violence with multiple people being shot with guns and futuristic weapons, some punching, kicking and one character is stabbed, intense chase sequences and space battles, implied genocide and some scary creatures; a brief shot of an alien man in an orgy, but nothing sensitive is shown, some kissing; two extended shots of both male and female rear nudity, a long scene where a women is in nothing but her underwear, upper male nudity, some alien women in skimpy outfits; light drinking; no smoking or drug use; and, movie suggests that lies are necessary to give people belief and hope.

JUPITER ASCENDING is a science fiction adventure movie from the Wachowski Brothers (THE MATRIX, SPEED RACER) about an ordinary young women who gets caught up in intergalactic fight over Earth.

The movie takes place in the present day. Unknown to the people of Earth, the human race on this planet was actually seeded by powerful alien royalty over 100,000 years ago. Three alien siblings, Balem (Eddie Redmayne), Titus and Kalique Abrasax own a multitude of planets. Carrying on the legacy of their deceased mother, the siblings seed planets with humans, and eventually the humans on it are harvested to enrich those in charge with the most valuable commodity, which is time. Over and over planets across the universe are completely wiped out, and the humans are harvested for a “youth serum” to allow the rich and powerful to live forever. When the matriarch of the Abrasax family dies at 91 millennium old, her title to Earth and everyone on it falls, not to one of her children, but to her reincarnated self, an Earth citizen named Jupiter Jones.

Jupiter Jones (Mila Kunis) hates her life. Born on a boat while being smuggled into the USA illegally from Eastern Europe, Jupiter now lives with her widowed mother, aunt and cousin and works every day as a maid cleaning houses. When Balem sends some creatures after Jupiter to have her killed because he wants to inherit Earth, Jupiter is suddenly saved by Caine Wise (Channing Tatum), a genetically altered hunter. Caine has been hired by Balem’s brother Titus, who also wants Earth.

Shocked to find out she’s not only royalty, but an intergalactic royal at that, Jupiter feels she can only trust Caine, the brute who saved her. As she tries to wrap her head around this new revelation, she struggles over what to do about the new power she holds and the increasing feelings she has for Caine.

JUPITER ASCENDING is a fairly entertaining sci-fi movie, with exciting action sequences and spectacle galore. The narrative is a little hard to follow at times and the jeopardy could have been more grounded in the characters, most of whom lack depth and development.

In true Wachowski fashion, JUPITER ASCENDING definitely spouts pagan and false religious worldviews that rest on the story’s entire premise. While the protagonists act heroically, make moral and difficult decisions and even find redemption, the overall worldview conflicts with a Christian worldview. The story revolves around this idea that humanity was seeded by aliens and will eventually evolve into different species. Also, the villain who profits off of the destruction of others is clearly evil, but the filmmakers use this as an argument against capitalism. There’s also a statement about lies being a necessity for belief and hope.

Overall, JUPITER ASCENDING has its entertaining moments within the action, but the false religious elements and some unnecessary nudity will be problematic for media-wise viewers.