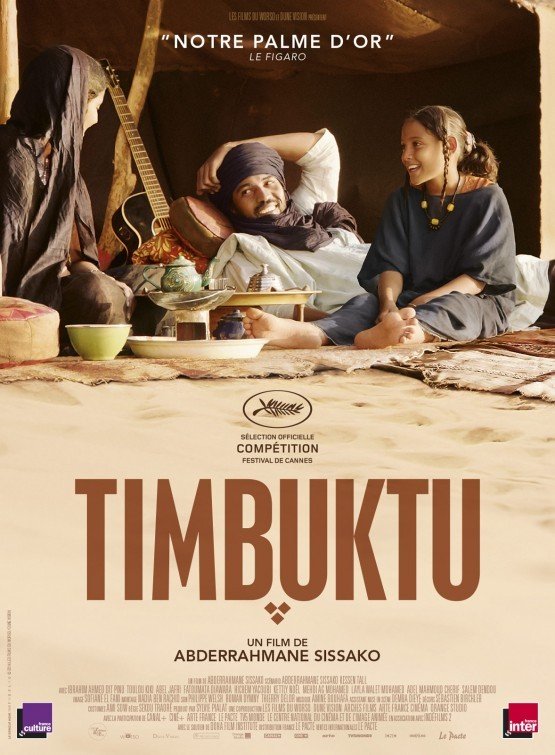 TIMBUKTU tells the story of Kidane, a Muslim cattle herder, and his family, who inhabit the desert ridges of the city of Timbuktu in West Africa. Kidane and his family find their tranquil lives interrupted by Jihadist, Muslim extremists, who are determined to control their lives and their Muslim faith as well as that of their neighbors. The villainous Islamofacists have banned music, laughter, cigarettes, and even soccer in Timbuktu. The situation of Kidane’s family changes abruptly when Kidane has a fatal argument with a local fisherman, an argument leading to tragedy.

Although TIMBUKTU presents an Islamic worldview, the movie’s artistic quality is fairly high. This is mainly due to some noteworthy storytelling, acting, cinematography, and camera work. The problem is, although the movie clearly denounces the cruelty and violence of Muslim extremists, it falsely claims that Islam is, at bottom, a truly peaceful and honest religion. This, of course, doesn’t match what’s actually said in the Muslim holy books, which are rife with cruelty, murder, violence, deceit, and oppression. TIMBUKTU may not be totally abhorrent, but it is still clearly unacceptable.

(PaPaPa, FRFRFR, OO, B, VVV, D, MM) Very strong pagan worldview promoting the false religion of Islam, with an attempt to denounce extreme forms of Islam in order to protect the “peaceful” and “honest” Islam religion, mixed with a strong occult element where the neighborhood “witch” practices Voodoo and sinisterly encourages an Islamic extremist to practice an occult dance that results in him becoming possessed and some moral elements that do expose the harsh cruelties of the Islamofascists who also oppress their fellow Muslims; no foul language; very strong violence, with a scene depicting the main character shooting and killing another character after a physical altercation, another scene showing Islamist extremist fatally executing two individuals by burying them up to their necks and stoning them, and two characters are shot by Islamic extremists after being sentenced to death; no sexual content; no nudity; no alcohol use or drunkenness; light smoking, with a scene depicting a member of the Islamic extremist group smoking a cigarette, but hiding his smoking use from his cohorts; and, male protagonist acts recklessly but suffers for his recklessness, hypocrisy, mean and cruel Islamic legalism but rebuked, oppression of women but rebuked (though Islam and its religious books are not recognized as the source of this and other oppression).

TIMBUKTU tells the story of a cattle herder and his family who inhabit the desert ridges of the city of Timbuktu in West Africa. They find their tranquil lives suddenly interrupted by Jihadist, Muslim extremists, who are determined to control the lives and Muslim faith of the local citizens.

Kidane is a proud cattle herder who lives peacefully in the dunes near Timbuktu with his wife Satima, his daughter Toya, and Issan, their orphaned 12-year-old adopted son who helps take care of the cattle. In town, the people suffer, powerless, from the new regime of terror imposed by the Jihadists determined to control their Muslim faith, despite opposition from one of the city’s Muslim leaders. Music, laughter, cigarettes, and even soccer have been banned. The women have become shadows but resist with dignity. Every day, the new improvised courts issue terrible, absurd sentences. Kidane and his family are being spared the chaos that prevails in Timbuktu, but their situation changes abruptly when Kidane has a fatal argument with a local fisherman, an argument leading to death and tragedy.

The dominant worldview that TIMBUKTU unquestionably presents is an Islamic worldview. The movie’s purpose is to protect and defend the Muslim faith by presenting a narrative that denounces Jihadist extremism that are “exploiting” Islam. In other words, this movie is trying to show how sinister and detrimental these religious extremists are to the Muslim religion. This movie is undoubtedly a propaganda tool used to strategically and intentionally promote the Muslim faith as one that affirms love and peace.

Ironically, TIMBUKTU condemns Jihadist extremism for supposedly abusing the Muslim religion, even though these extremists are faithfully doing things that the Quran clearly teaches Muslims and that Islam’s founder, Muhammad, himself modeled for his confused followers. Islam is not only a false religion but also a violent religion that encourages violence against humanity in the name of its false god, Allah.

It is also important to note that throughout the movie characters interchangeably use “Allah” and “God” to refer to the same deity. TIMBUKTU makes this deity to be one of peace, righteousness and justice in order to criticize the Jihad, but that isn’t the deity spoken of in the Quran, as shown by such verses as Sura 47:3 and 8:12. Of course, the Judeo-Christian God, the one spoken of in the Bible, is the one true deity. As Jesus prayed in the Garden: “And this is eternal life, that they know you the only true God, and Jesus Christ whom you have sent” (John 17:3).

Although TIMBUKTU presents an Islamic worldview, the movie’s artistic quality is fairly high. This is mainly due to some noteworthy storytelling, acting, cinematography, and camera work. The professional cinematography transports the viewer to the place and time depicted in the story.

The actors seem to embrace and understand their characters. In doing this, an actor can convey through the art of acting the emotional and psychological state of the character in different scenes. Thus, the filmmakers behind TIMBUKTU successfully encourage viewers to share in the experience of each character. For example, toward the end of the movie, the protagonist is about to be executed by the controlling Jihadist, and his wife franticly and desperately runs toward the scene to interfere. Viewers will experience an emotionally cathartic moment as they feel compassion, sadness and pain for both these victims.

All in all, TIMBUKTU is a compelling but ironic drama with an Islamic worldview overall. It contains a denunciation of Muslim extremism by trying to show, at the same time, that the Muslim faith is peaceful, even though the prophet Mohammed and the Quran ultimately do indeed teach a cruel, immoral and false kind of violence and oppression. Thus, TIMBUKTU fails to expose the real root of the evils behind the Muslim faith, but it can be used to generate some discussion about why Muslims are often so violent and cruel. This is an important and necessary discussion, especially considering what’s currently happening in the Middle East, Central Asia and other parts of Africa under Muslim rule.