GETT: THE TRIAL OF VIVIANE AMSALEM 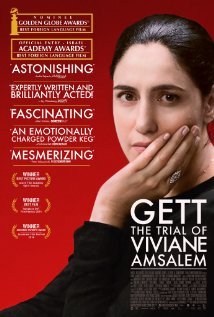 GETT: THE TRIAL OF VIVIANE AMSALEM takes place in a courtroom in Israel. It begins, progresses and ends with a secular Jewish woman, Viviane, in court asking for a divorce from her husband of 30 years, Elisha. They married young, and Elisha became a strict orthodox Jew, so he now is refusing to grant Viviane’s request for a divorce. He stubbornly refuses although the couple’s been separated for three years. They think that they’re simply not compatible and, after 30 years and four children, Viviane has had enough. She finds herself in a courtroom with all men – her husband, three staunch rabbinical judges, a scribe, and her advocate.

GETT maintains the viewer’s interest with good production values and acting, from the cast. Although nearly the entire movie takes place in one cold, grey courtroom, creative close-ups and superb acting by Ronit Elkabetz as Viviane keep viewers fully engaged. GETT has a strong Romantic worldview, however. This is due largely to the fact that divorce is seen as the answer to the story’s marital conflict. Therefore, Movieguide® advises strong caution for GETT.

(RoRo, L, D, MM) Strong Romantic worldview as a Israeli woman goes before strict rabbinical judges requesting a divorce from her husband, who’s shown her no love; six obscenities, one profanity; no violence; no sexual content; no nudity; woman smokes cigarette; and, slander and marital dysfunction includes discussion of separation and divorce.

GETT: THE TRIAL OF VIVIANE AMSALEM takes place in Israel and begins, progresses and ends with Mrs. Viviane Amsalem, a secular Jewish woman in a court case against her husband of 30 years. Her husband, Elisha, a more conservative Jew, refuses to honor Viviane’s request for a divorce, despite the fact they’ve been separated for three years. They are simply not compatible, Viviane contends, and, after 30 years and four children, she has had enough. However, she’s stuck in a trial courtroom of all men: her husband, three staunch rabbinical judges, a scribe, and her advocate, Carmel Ben Tovim.

Throughout the movie, Elisha refuses to grant a divorce to Viviane, who’s been staying with her brother for the past three years. She still cares for their children, only one of which is still at home with the father. Elisha gives her no money, and she supports herself as an established hairstylist with her own salon. Viviane feels unloved and that Elisha is not pleased or grateful for anything she’s done. It was never good enough for Elisha. Viviane even helped care for his unkind mother who stayed with them for 20 years until she died.

Elisha contends that Viviane was disrespectful and did not allow him to have the Kosher and more conservative Jewish lifestyle he wanted. He allowed no visitors and showed his wife no affection, though he refuses to divorce her because he says he loves her.

Finally, witnesses are brought in that speak for or against Elisha and Viviane and the rabbis are left to judge. Some of their testimonies send the courtroom into an uproar and give some comedy relief. Year after year, witness after witness, the judges refuse to override Elisha’s decision to not grant Viviane a divorce.

Eventually, Elisha reaches a breaking point, or so it seems.

GETT: THE TRIAL OF VIVIANE AMSALEM has a strong Romantic worldview. This is due largely to the fact that divorce is seen as the answer to resolve the conflict between Elisha and Viviane. Though both Elisha and Viviane experience loss during the divorce proceedings, the divorce is viewed more as a victory than a loss because Viviane is finally given her request for divorce. Strong caution is advised, therefore.

The production quality of GETT: THE TRIAL OF VIVIANE AMSALEM is good. Although nearly the entire movie takes place in one cold, grey courtroom, creative close-ups and superb acting by Ronit Elkabetz as Viviane keep viewers engaged. It seems it would be impossible to have an interesting story where there is no scandal, extramarital affair, or the husband isn’t a top secret agent with a double lifestyle. The movie pulls in the viewer, who’s kept wondering. What went so wrong? Why won’t Elisha just grant her the divorce? Why doesn’t Viviane try to stay in the marriage? Perhaps, they can still reconcile things. To be sure, 30 years is a long time to be in a marriage where one feels unloved or respected. Ultimately, the movie asks viewers to go on a rollercoaster ride with Viviane as she laughs, cries, withdraws, and speaks boldly.

Eventually, the rabbis agree to allow the dissolution of Viviane and Elisha’s marriage. However, in wanting to keep with God’s law, they advise and judge for most of the story that Viviane should return to her husband. At a point of frustration, Viviane refers to the United States and how she would have had her divorce years ago. It makes viewers take a look at marriage and divorce in America and how quickly and easily marriages can be disbanded. Unfortunately, divorces whether fast or slow lead to many negative consequences among not just the family, but in society and the economy. God is gracious and forgiving, but He hates divorce and would always rather we love and forgive one another and be reconciled even with those we’ve hurt or who have hurt us. (Ephesians 4:32, 2 Corinthians 5:18)