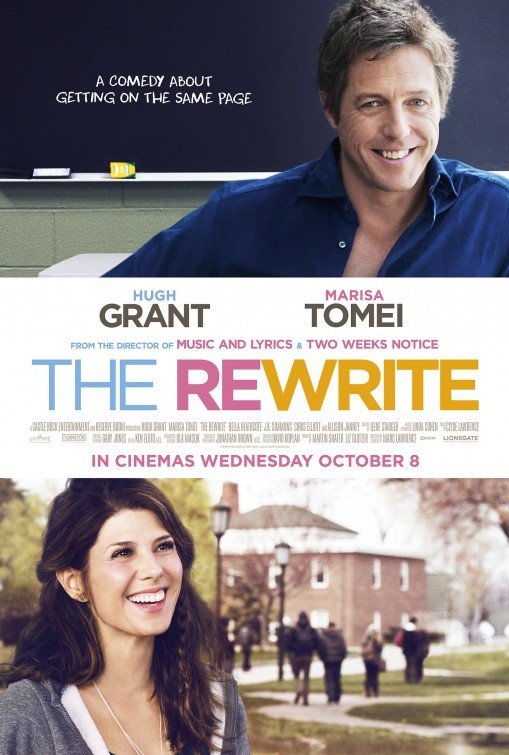 THE REWRITE stars Hugh Grant as a screenwriter named Keith Michaels, who won an Oscar for an enormously popular movie that people praise everywhere he goes. It’s been years since his last success, however. Keith’s so desperate for money that his agent gets him a job as a college professor in upstate New York. It’s an immediate culture clash for Keith, who’s used to wine, women and song while living the high life. He lets a female student seduce him and tries to avoid teaching by telling the students to bring in their scripts a month later. When Keith butts heads with a female professor and gets caught for the affair, he’s forced to reevaluate how he’s handling his career and his life. In effect, he has to rewrite his life.

THE REWRITE has funny, zingy dialogue throughout and well-drawn, memorable characters. Keith has a bevy of bad attitudes in the beginning, but his transformation into a better man is believable and affecting. That said, THE REWRITE warrants strong to extreme caution for foul language, brief marijuana references and other immoral content.

(B, C, PaPa, LL, S, N, AA, DD, A, MM) Light moral, redemptive worldview overall, with arrogance rebuked and being unselfish and helping others extolled, undercut by protagonist’s strong immoral behavior on the way to learning some life lessons, with the idea it’s never too late to improve one’s character and behavior being a key element; 18 obscenities and profanities (including one “f” word and a couple strong profanities); no violence; it’s implied older, divorced college professor has an unmarried affair with his college-age student, which he breaks off as he learns some lessons, partly through becoming friends with a divorced woman more his age; upper male nudity; alcohol use and drunkenness; references to marijuana use; and, lying, deceit, laziness but eventually rebuked.

THE REWRITE is a warm, witty comedy that follows the travails of an Oscar-winning screenwriter who takes a writing professor job in upstate New York when his writing career runs dry. THE REWRITE has a light moral worldview overall, undercut by the immoral behavior of the professor on his way to learning life lessons and becoming a better person.

The story follows a screenwriter named Keith Michaels (Hugh Grant), who won an Oscar for an enormously popular movie that people praise everywhere he goes. However, it’s been years since his last success, and he is so desperate for money that his agent gets him a job as a writing professor at a college in upstate New York.

It’s an immediate culture clash for Keith, who’s used to wine, women and song while living the high life. He lets a female student seduce him right away and embarks on a secret relationship with her, against school rules. He also picks his students not on the basis of how good their sample screenplays are, but on how cute they are, and then tries to avoid teaching by telling the students to bring their scripts to him in a month.

Yet, when he butts heads with high-strung professor Mary Weldon (Alison Janney) over his lax attitudes, and then gets caught for having the affair, Keith is forced to reevaluate how he’s handling not only his career, but his life. In effect, he’s rewriting his life.

THE REWRITE has funny, zingy dialogue throughout and well-drawn, memorable characters. Keith has a bevy of bad attitudes at the beginning, but his transformation into being a better man is believable and affecting in the movie’s second half. An interesting, key element to the movie is the idea that it’s never too late to make changes in your life in favor of being a better person.

The movie’s immoral content is very limited and most bad behavior is just briefly discussed or implied, rather than salaciously exploited. As such, the combination of the movie’s tasteful handling of illicit behavior along with its story of redemption adds up to making this a movie that many adults might enjoy. THE REWRITE does have some strong foul language, however, so a warning of strong to extreme caution is advised.