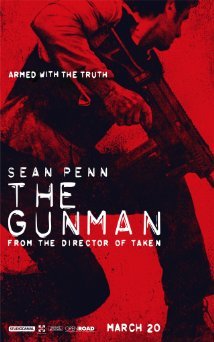 THE GUNMAN stars Sean Penn as Jim, an ex-mercenary working as an aid worker in Africa, who starts investigating an assassination mission he conducted eight years before after some African rebels come to kill Jim. Jim goes to two of his former buddies, who led the assassination mission, one stole Jim’s girlfriend at the time and eventually married her. The other buddy, however, who now runs their former security company, has ordered the hit on Jim and the other team members. He orders an assassination team to kill Jim, the girl and her husband. After the team kills the husband, Jim and the girl barely escape and start running for their lives.

Despite an anti-capitalist plot involving mercenaries hired by a multinational mining company exploiting Africa’s mineral wealth, THE GUNMAN focuses mostly on the action. Sean Penn makes a convincing ex-military mercenary as he fights all sorts of bad guys. The action is exciting but intense, as is the body count. THE GUNMAN has some positive moral elements, but the violence, strong foul language and immoral love triangle warrant extreme caution.

(Pa, BB, Ro, FR, Acap, Co, So, C, LLL, VVV, S, N, AA, M) Light mixed and (thus) pagan worldview with some moral elements mixed with some Romantic, antinomian elements involving fornication and adultery, with an anti-capitalist subtext about multinational corporations exploiting developing countries that sounds like some communist, socialist claptrap, but with some Christian, redemptive elements supporting overseas aid workers and the idea of helping others, especially the needy, including a priest is seen leading a funeral in brief scene and images of a crucifix and a Jesus statue; 46 obscenities (more than half are “f” words), three strong profanities, three light profanities, and sick man has to vomit; lots of very strong and some strong intense violence with blood includes tough fighting and punching, breaking a couple arms and legs, people shot at close range during fighting, tied-up man whose face shows bloody signs of being beaten is finally shot in head, pointblank shootings, explosion, blood splatters as people shot dead, assassination scene shows targeted dead body with bloody bullet holes, villains deliberately light bathroom on fire but the tables are turned and one of them is burned instead of the hero and his girlfriend, etc.; implied fornication in one scene, passionate kissing between man and married woman who used to be his girlfriend, implied adultery then occurs; shots of upper and rear male nudity, plus woman wears just a shirt but it covers her panties as she stands in a room; alcohol use and drunkenness; smoking but no drugs; and, deceit, evil conspiracy.

THE GUNMAN stars Sean Penn in an intense action thriller about a corrupt multinational mineral company that orders a hit on an African government minister in the Congo, which results in some dire repercussions eight years later. Despite the liberal anti-capitalist ideology in the plot outline, the movie focuses mostly on the action, even inserting some positive elements about doing the right thing. However, it has lots of strong foul language and very strong bursts of violence, with a romantic triangle involving fornication, deceit and, eventually, adultery.

In the story, which begins in 2006, Penn plays Jim Terrier, an American mercenary and former Special Forces commando now working for a security firm involved with a mining company. While protecting some aid workers in the Congo, including a beautiful female doctor named Annie, Penn and his buddies do some dirty work for the multinational mining company, which, like other multinationals, is supposedly trying to exploit the country’s vast mineral wealth. Jim and Annie are clearly an item, which has created some jealousy on the part of Jim’s comrade, a Spanish man named Felix, played by Javier Bardem.

Felix and another man, an Englishman named Cox, lead Jim’s mercenary group on a covert mission from the mining company to assassinate the Congolese government’s leading minerals bureaucrat, who plans to stop the multinational companies from continuing to exploit Congo’s vast mineral wealth. Jim is one of three possible shooters, but it’s up to Felix to pick which shooter will do the actual murder. Of course, Felix picks Jim because, after he does the dirty deed, the shooter will have to take a plane out of the country and never return. This gives Felix free reign to pursue Annie on his own, without Jim being there. Being a team player, Jim performs the assassination and leaves, but he’s clearly bothered by the whole incident.

Eight years later, Jim has quit being a mercenary and is back in the Congo, trying to help some local villages in a rural part of the country dig a new well for drinking water. While doing that, a group of armed Congolese rebels interrupt the digging, looking for “the white man.” Using his military skills, Jim dispatches most of the rebels, but a young African man he’s befriended has to shoot one of the men to save Jim’s life.

The next day, Jim’s on a flight to London. In London, Jim confronts Cox, who’s now running their old security firm. After the assassination, Jim felt guilty about the things he had done and quit being a mercenary, but Cox is now leading the firm’s various missions from behind a desk in London.

During their verbal confrontation, Cox tells Jim he needs to talk with Felix, who now has his own international company in Barcelona, Spain. Cox explains that it was Felix who would know who in the mining company, and perhaps even what government officials, ordered the assassination mission in Congo eight years earlier.

Jim travels to Barcelona to confront Felix, who tells him that the United States Congress is now investigating their old security firm that Cox now runs. Felix also informs Jim that both of them are on the Congressional witness list. Oh, and by the way, the other two “shooters” have already been killed, which means that someone is trying to “clean house,” probably their old buddy Cox. Of course, by the time this conversation occurs, Felix and Annie are married. In fact, they are thinking about adopting a child.

This plotline has lead to personal conflicts, regrets and unfulfilled desires among Jim, Annie and Felix. Annie goes to Jim’s apartment in Barcelona to invite him to their country villa, and their passion gets the best of them. Later, at the villa, Jim tries to coax more information from a drunken Felix about their Congo mission. What Jim doesn’t know is that Felix has already contacted Cox, who’s sent a team of mercenaries to kill Jim once he leaves Felix’s villa. What Felix doesn’t know, however, is that Cox’s team of killers have orders to kill all three of them at the villa, not just Jim but also Felix and Annie.

Needless to say, violent chaos breaks out when the killers arrive at the villa. Jim, who’s much better trained in the military arts than Felix, tries to save all their lives, but will the troubled, duplicitous Felix, who’s become an alcoholic, get in the way?

Complicating matters is that, over the years, Jim kept an evidence trail of their old security firm’s missions, a trail that their old buddy Cox desperately wants and will stop at nothing to get. Another complication is that Jim is suffering brain damage from a bad concussion he suffered while fighting the War on Terror in the Middle East when he was an American soldier, before he became a mercenary. The damage can lead to intense headaches, dizziness and sickness during tense situations.

THE GUNMAN is filled with intense jeopardy. Sean Penn makes an incredibly buff, sympathetic soldier of fortune with skills that would make even Jason Bourne or Jackie Chan envious. Bardem’s performnance as Felix gets a little weird and unbelievable in one scene, but the movie is effective and suspenseful otherwise.

Though the movie clearly adopts Penn’s leftwing sensibilities about alleged multinational capitalist exploitation of developing companies overseas, the movie wisely focuses on all the action and intense fighting for most of its two-hour running time. Also, the movie briefly references the “corruption” you will find in African countries like Congo where cruel, violent despots and rebels make life for the average citizen there nearly unbearable (if, that is, you can keep alive or avoid being raped, tortured or mutilated).

Congo has perhaps suffered the worst in this regard during the last 20 years. Since 1999, the United Nations has tried to keep a large peacekeeping force therein, but it’s been unable to stop the death of 5.4 several million people in this large area in Central Africa.

All that said, what the movie doesn’t tell you is that Congo contains more than 200 ethnic groups, which have given rise to about 20 different armed groups, according to USA Today on August 21, 2013 (http://www.usatoday.com/story/news/world/2013/08/20/congo-civil-war/2624757/). In addition, the xenophobic Tutsi government in Rwanda invaded Congo in 1996, 1998 and 2004 while hunting for Hutu tribespeople and armed “soldiers,” who slaughtered about 800,000 Tutsis during the infamous Rwandan genocide in 1994 (see the MOVIEGUIDE® Award-winning movie HOTEL RWANDA). Clearly, multinational capitalist corporations trying to exploit Congo’s vast natural resources are probably among the LEAST of that nation’s problems! In fact, according to news reports, the various armed groups and local Congolese tribes, as well as the faction running the current Congolese government, are themselves fighting over these resources. Thus, loony leftist lies blaming capitalist “imperialism” or past “colonialism” (a period that pretty much ended in Africa in the 1960s), don’t tell us the real problem, much less give us the real solution to that problem. The real problem is the sinful nature of mankind that includes man’s inhumanity to man, and the only solution to that is the Gospel of Jesus Christ in the Bible, which establishes true justice, true peace, true order, true goodness, and even true opportunity, and true prosperity. Interestingly, that same Bible extols hard work, prudent action, goodness, and wisdom, the key ingredients to capitalist ingenuity and wealth, as opposed to laziness and foolishness (“Lazy hands make a man poor, but diligent hands bring wealth” – Proverbs 10:4 and “You will prosper if you are careful to observe the statutes and the rules that the LORD commanded Moses for Israel” – 1 Chronicles 22:13).

Ultimately, the biggest problems with THE GUNMAN involve all the strong foul language and very strong violence that occur. There’s also a scene where Jim and Annie renew their sexual relationship eight years after they were in Congo together, even though Annie is now married to the deceitful Felix. Felix may have been deceitful, but they’re still committing adultery. Therefore, MOVIEGUIDE® advises extreme caution for THE GUNMAN.