"When Men Seek to Be God, Bad Things Happen" 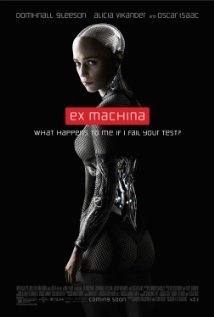 EX MACHINA is a startling, unsettling science fiction movie about the dangers and complexities of artificial intelligence. Caleb, a young programmer for a Google-like tech corporation called Bluebook, wins a lottery to spend a week with Bluebook’s CEO, Nathan, at Nathan’s isolated mountain research facility. Nathan tells Caleb he’s built an artificial intelligent robot named Ava. He wants Caleb to help him determine if Ava thinks like a human. As Caleb starts conversations with Ava, the whole situation becomes odd as he develops feelings for Ava and wonders if Nathan is hiding something.

EX MACHINA is slickly made with strong suspense, interesting characters and unexpected plot twists. What’s difficult about EX MACHINA is that the story’s rather complicated, with a Godless worldview. The result is a mixed bag of humanist musings on technology, love, gender, and consciousness, with no real conclusion. Allusions are made to ethics and morality, but this isn’t really seen unless you count Caleb’s naive empathy for Ava. The movie also has excessive foul language and explicit nudity. So, EX MACHINA will turn off media-wise viewers with its lewd, abhorrent humanist content.

EX MACHINA is a startling, unsettling science fiction movie about the dangers and complexities of artificial intelligence.

Caleb, a young programmer for a Google-like tech corporation called Bluebook, wins a lottery to spend a week with the CEO of Bluebook at his isolated house in the mountains. Nathan, the genius tech guru who created the search engine Bluebook when he was young, is working on a secret project, deep in the middle of nowhere, hidden in his fancy yet highly secure home/research facility. Nathan tells Caleb he’s built the world’s first artificial intelligence. He brought Caleb to his home to help him perform a Turing Test on the AI robot. Nathan’s named the robot Ava to see if his creation can think like a human.

Caleb meets Ava, who resides in a locked glass room with cameras all around. She has a human face and a mechanical body, but moves fluidly. Caleb begins talking with Ava to see if she can convince him she’s more than a machine. Blown away at what Nathan has built, Caleb enjoys his talks with Ava. At one point, the power goes out and the cameras turn off, leaving Ava and Caleb alone. Ava walks up to the glass and tells Caleb he shouldn’t trust his boss Nathan.

Taken aback by Ava’s comment, Caleb suspiciously digs into Nathan’s life after getting him blind drunk. He finds that Nathan already has prototypes for upgraded versions of his technology, something that would make Ava obsolete and would result in a memory wipe for her. Caleb has grown fond of Ava and is weirdly attracted to her human qualities, so he decides to help her escape. Can Caleb really trust anyone, including Ava, or is everyone just manipulating him to get what they want?

EX MACHINA is slickly made with strong suspense, interesting characters and unexpected plot twists. Smartly written, the movie balances the entertaining and philosophical elements with ease. The only artistic nuisance is some overacting done by Domhnall Gleeson as Caleb.

What’s difficult about EX MACHINA is that the story’s complicated, with a worldview that’s ultimately godless. The movie doesn’t try to scientifically prove the possibilities of such technology: a man-made machine that thinks and feels. Rather, it accepts its own science fiction world as truth as the characters pursue proof of artificial consciousness. Eventually, the movie backtracks and shows that perhaps the most human quality is not love, but self-preservation through manipulation. That’s not a flattering reflection of man, but it’s also not a completely false one.

At one point, Ava asks her creator, Nathan, what it feels like to have created something that hates him. Nathan is lost in his obsessions, so much so that his own demise, as well as the thought of the human race’s future enslavement of conscious machines, is a nonchalant thought. Meanwhile, Caleb is so wrapped up in his desire to be a good person that he’s far too easily seduced and manipulated.

The result of all this is a mixed bag of humanist musings on technology, love, gender, human nature, and consciousness, with no real solid conclusion. Allusions are made to ethics and morality, but this isn’t really seen unless you count Caleb’s naive empathy for Ava. Since the movie also contains a significant amount of vulgar language and excessive nudity, media-wise viewers probably will find EX MACHINA abhorrent.