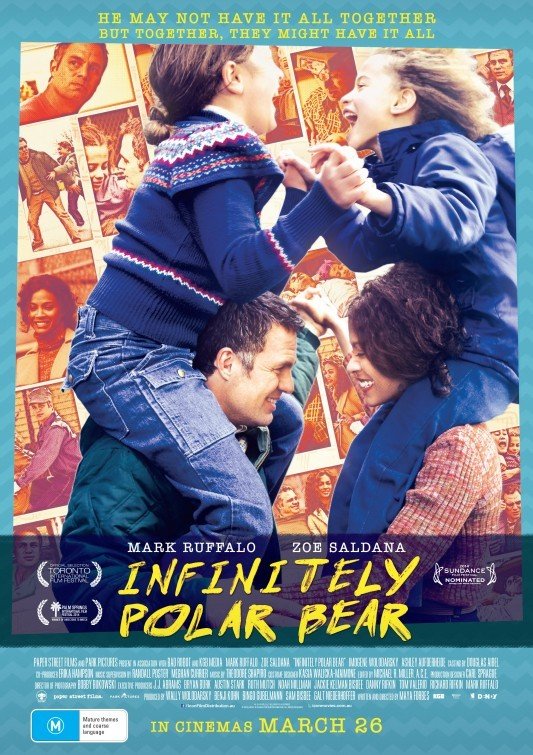 In INFINITELY POLAR BEAR, Maggie and Cam struggle to raise their two daughters during the recession of the 1970s. Though they come from privileged backgrounds, Cam suffers from manic depression, which lands him in a mental hospital. Maggie move her daughters from the country to a cramped Boston apartment, but is unable to find a good job. In desperation, she enrolls in an MBA program at Columbia in New York City, leaving the care of the girls to her recovering husband. Through trial and error, Cam adjusts to being a stay-at-home dad. Together, they work to rebuild their family.

INFINITELY POLAR BEAR is quirky, entertaining, funny, and sad at the same time. Each scene becomes a guessing game as to what comes next. It’s easy to get caught up in the hopes and dreams of these characters. Sadly, there’s no chemistry between Maggie and Cam, which serves as a constant distraction. Although devotion to family and forgiveness are at the core of the movie, the message is skewed by foul language and questionable moral taste. Extreme caution is advised for INFINITELY POLAR BEAR.

(Pa, B, LLL, V, S, N, AA, D, MM) Mixed pagan worldview with pagan and moral elements, including an emphasis on material wealth and success, children want to own things that other people envy, but unconditional love and forgiveness are central to the plot, and family is determined to stay together despite the challenge of dysfunctional relationships; approximately 40 obscenities and profanities, a couple of offensive terms are used in reference to certain people, slang term is used several times for male private parts, man grabs his privates and uses a slang term for them, father gives both middle fingers to his daughters; some violence includes man hits another man in the face during a manic episode and throws things around an office, man throws a bowl in anger and splatters food everywhere, man forces open a locked door and scares his children, man mentions his dog was abused by its previous owner; some brief sexual content includes husband fondles his wife’s breast while they’re both fully clothed, and he’s trying to seduce her, children say they are scared of a rapist breaking in while they are alone in the apartment, man mentions to a friend that his brother engaged in sexual behavior last night in the van they are driving; upper male nudity while man wears a bathing suit; multiple scenes of man getting drunk and coming home drunk, a couple scenes of man drinking a beer at home; many scenes depicting man smoking cigarettes and it’s implied he smokes at least two packs a day; and, strong miscellaneous problems include woman lies about where her family lives so her children can go to a better public school, parents are proud that their daughter beat up another kid and won the fight, man has multiple manic episodes where he scares his wife and children with his behavior, man leaves young children alone at night to go clubbing, father is put into a mental institution and separated from his family, father often acts more juvenile than his children and is portrayed as a bad role model.

INFINITELY POLAR BEAR is an entertaining, funny and touching movie about a family dealing with mental illness during the 1970s, but the chemistry between some of the actors needs some help, and there’s a lot of crude language.

Cam Stuart is an eccentric father, more likely to be mushroom hunting, cooking elaborate meals or tinkering with one of his many unfinished projects instead of spending his day at work. All his life he has struggled with manic depression and bipolar disorder, which caused him to be expelled from Harvard and shunned by his wealthy Boston family. Though he and his wife, Maggie, were raised in privileged backgrounds, they’re struggling to support two daughters during the recession of the 1970s. When Cam has a manic breakdown that lands him in a mental hospital, Maggie is forced to leave their home in the country and live with their daughters, Amelia and Faith, in a cramped city apartment.

In Cambridge, Maggie is unable to find a decent job. So, she applies to business school and gets accepted to Columbia’s MBA program in New York City. She’s convinced that furthering her education is the only hope for a better life, so she asks Cam to take responsibility for raising the girls while she’s in New York. Though Cam’s reluctant and overwhelmed by the prospect, his doctors have been pushing for him to develop more routine in his life. Cam agrees, hoping it will help get him back on track and bring his family together again.

Amelia and Faith aren’t so optimistic, however. They balk at the idea of living with their irresponsible father. Maggie promises to come home every weekend and rushes to finish her degree in 18 months. As the sole caregiver for his daughters, Cam quickly finds himself in over his head. Although he easily charms his girls with his oddball quirkiness and fun-loving spirit, he’s still an embarrassment to them, and they try desperately to keep him away from their friends. Through trial and error, he learns how to be a stay-at-home dad and finds his purpose in life.

INFINITELY POLAR BEAR is quirky, entertaining, funny, and sad all at the same time. It offers a serious twist on the typical plot of the inept father having to take care of the children in irreverent and unconventional ways. Each scene becomes a guessing game as to what is about to occur. It’s easy to get caught up in the hopes of these characters and root for them as they strive to achieve the success that seems to elude them at every turn. The one constant distraction, sadly, is the lack of chemistry between Cam and Maggie. It is difficult to completely buy into the movie because of this, although the movie’s based on a true story.

Although devotion to family and forgiveness are at the core of INFINITELY POLAR BEAR, these values are depicted through an eccentric lens that has been scratched by the misdeeds of mental illness and a flawed sense of responsibility. It shows the reality of poverty and a parent’s desperation to do anything for their children, even if that thing is unwise or deceitful. Cam thinks nothing of cursing in front of his children, or leaving them alone in the middle of the night so he can get drunk and go night clubbing. Maggie allows her daughters to live in a potentially unsafe situation with a man who’s barely able to take care of his own needs. The movie’s message is an overall positive one of hope and love, but the journey to get there is fraught with foul language and questionable moral taste. Extreme caution is advised for adults, and children should stay away.