"An Intense Tale of Family Survival" 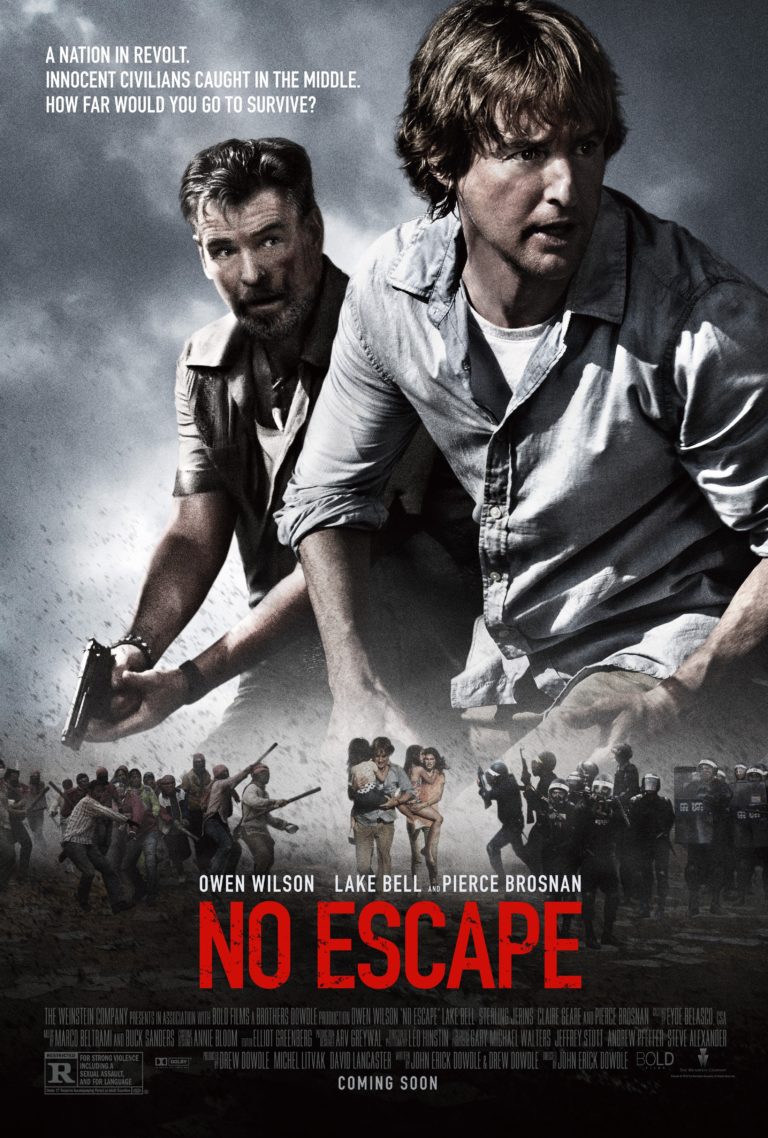 NO ESCAPE is about an American family traveling to an unnamed Southeast Asian country. Jack Dwyer is taking his wife, Annie, and their two young daughters there for a new job with an international company helping the country update its water system. During the night while they’re sleeping in their hotel, the country suffers a violent coup. The next morning, bands of armed demonstrators are roaming the streets and the hotel shooting and beating to death any and every foreigner they see. The nightmare for Jack’s family has just begun.NO ESCAPE is one of the most intense movies anyone will ever see. The jeopardy hardly ever lets up. NO ESCAPE has some very strong violence, foul language and politically correct, anti-capitalist elements in one scene. Also, the hero’s two young children are in constant danger. However, the movie’s main point is the importance and strength of family. Jack does everything he can to save his wife and daughters, even offering his own life at a crucial moment. NO ESCAPE is one of the year’s best movies, but extreme caution is advised.

(BB, PP, PC, Acap, AP, LL, VVV, AA, DD, M) Strong moral worldview focusing on an American family bonding together to stay alive during intense jeopardy in a foreign country, marred by a politically correct, anti-capitalism explanation for why the country is suddenly in chaos that blames the American and British governments in collusion with large corporations who put foreign countries on the hook for large loans; 15 obscenities, one GD and six light exclamatory profanities; some very strong and strong violence includes pointblank shootings, people shot in head, children thrown from one roof to the next to mother’s arms, husband and wife jump from one roof to next, tank fires three times at building where people are, bodies of dead people with bloody wounds, villain holds gun at child’s head and tries to make her shoot her father by holding gun in his and child’s hand, constant jeopardy, protestors with clubs clash violently with riot police, snipers, truck hits man, people beaten, fighting; no sex; no nudity; alcohol use and man appears somewhat inebriated; smoking and people walk through an apparent brothel and opium den where one customers is lying down smoking opium; and, man says he’s going to a strip club, cruelty and people walk through an apparent brothel but nothing is shown.

NO ESCAPE is one of the most intense, jeopardy-filled movies ever made. It’s about an American family in an unnamed Southeast Asian country, who have to band together to survive when the country suffers a coup and angry protestors with guns target all foreigners.

The movie begins with the assassination of the prime minister of the unnamed country in Southeast Asia. Cut to 17 hours earlier with Jack Dwyer, his wife, Annie, and their two young girls, Lucy and Beeze, on a plane to the same country in Southeast Asia. Viewers quickly learn that Jack has taken a job with an international company that’s helping the country revitalize its water system. Jack feels guilty about having to take the job, however, because his own construction company in Texas went belly up.

On the plane, a mysterious Englishman named Hammond befriends the Dwyers. He offers them a lift to their hotel on a van driven by his Asian friend, who calls himself Kenny, after Kenny Rogers, the famous country singer.

At the hotel, the Dwyers learn that all TV communications have stopped. In their hotel room, it becomes clear that Jack’s wife is upset about living in a foreign country. This just makes Jack feel even guiltier about their situation.

Early the next morning, Jack decides to get an English language newspaper. He wanders outside the hotel and finds himself in the local market section nearby. Suddenly, a large group of angry demonstrators armed with clubs is marching toward an armed group of riot police. Jack barely escapes the clash with his life. As he nears the hotel, he sees the leader of another large demonstration shoot a foreigner in the head. The demonstrators see Jack and chase him. Jack escapes by climbing a fire escape ladder and destroying it behind him. Meanwhile, roving bands of demonstrators are going room to room in the hotel, killing every foreigner they see.

Jack eventually gets back to the hotel room, and he takes his family to the roof of the building, where other people have barricaded the door. Soon, however, the demonstrators bust through the door and start shooting. The nightmare for the Dwyers has just begun.

NO ESCAPE is one of the most intense movies you’ll ever see. The jeopardy hardly ever lets up. This might have been a problem were it not for the fact that every scrape the family in the movie gets into is different. The leader of the street riots is the main antagonist. He’s targeted Jack and his family because Jack’s new company had put a banner up in the hotel with his picture on it.

NO ESCAPE has some very strong violence in it. There are point-blank assassinations with blood, for example. Also, the hero’s two young children are in constant danger. NO ESCAPE also has some strong foul language as well.

The point of the movie, however, is the importance and strength of family. Jack does everything he can to save his wife and daughters, even offering his own life at a crucial moment. In that sense, NO ESCAPE may remind viewers of the first TAKEN movie, except the hero, in this case, is an everyman with no special skills. The movie’s final shot stresses this pro-family theme.

NO ESCAPE’s positive emphasis on family is slightly marred by a politically correct, anti-capitalist explanation for why the Asian country in the movie is in such chaos. At one point, Hammond confesses to Jack that the British and American governments are in collusion with corporations like Jack’s to put smaller countries in debt so they can come in and take over their infrastructure. In the particular country in question, the local people are upset that Jack’s company is taking over the country’s own water system. Of course, Jack is clueless about what’s happening, but Hammond feels an obligation to help Jack and his family since, he explains, it’s because of people like Hammond that Jack’s family is in this mess.

NO ESCAPE is one of the year’s best movies, but extreme caution is advised.