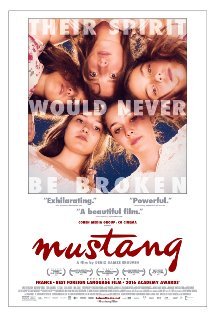 MUSTANG is a French movie set in Northern Turkey that’s a realistic portrayal of the lives of five Muslim teenage sisters. After the death of their parents, the girls are forced to live with their stern grandmother and suspicious uncle. As their curiosity to explore the outside world enhances, so does their grandmother’s desire to keep them contained. After the sisters sneak out to watch a local soccer game, the grandmother bolts up the house, turning it into a prison-like atmosphere. She marries the girls off one by one, while one commits suicide and the two youngest find a way to escape.

MUSTANG is an exceptional movie combining insights into life in an Islamic society with a heart-racing plot creating heightened suspense. The movie is narrated by the youngest daughter, whose sweet, helpless voice stresses the movie’s thematic element of lost innocence. MUSTANG shines a light on pressing issues in Islamic societies, the oppression of women. However, the movie offers no real solutions beyond a Romantic, feminist one of simple escape and antinomian “freedom.” So, MOVIEGUIDE® advises extreme caution for MUSTANG.

(RoRoRo, FeFe, B, FRFR, L, VV, S, AA, D, MM) Very strong Romantic, rather feminist worldview showing orphaned teenage girls under the thumb of their strict Muslim grandmother and uncle, including grandmother arranges marriages for grandchildren against their will, grandmother locks five sisters up believing confinement from outside world is necessary, grandmother makes decisions for granddaughters with no remorse for their feelings or input, and grandmother’s Islamic beliefs dominate what is morally the right thing to do, but movie doesn’t offer any real solutions to the problem of Muslim abuse of women, other than to escape and live a life of Romantic freedom with no moral foundation otherwise; one use of the “h” word, two “s” words, obscene gestures; moderate violence, no blood shed but numerous scenes of hot tempered uncle and grandmother yelling at girls for wanting to explore and learn beyond their customs, uncle throws a rock and smashes window, grandmother grabs girls by wrists forcefully and orders them to obey, wedding guests kick and punch door to break it down; implied sexual promiscuity, daughter sneaks out to sleep with boyfriend, daughters forced to spread open legs for doctor to ensure they are still virgins, uncle makes sexual passes at granddaughter, daughter kisses forced husband at wedding; no nudity but naturalistic scenes of sisters hanging out with each other in their underwear and bra; uncle drinks beer with friends during soccer game, underage sister sneaks peoples drinks at wedding and gets drunk; no drug use, but some wedding guests casually smoke; and, strong miscellaneous immorality includes lying, stealing, revenge, kidnapping and bad role models

MUSTANG is a French movie in Turkish following the lives of five orphaned teenage sisters living in a remote home in Turkey under the thumb of their strict Muslim grandmother and uncle.

After the death of their parents, the five sisters are sent to live with their stern grandmother and harsh uncle where their passion for life is slowly taken away. On a bright after school day, the sisters join some of their boy classmates to play in the ocean. When their grandmother gets word they were swimming with boys, she explodes in anger and demands them not to leave the house. She makes them brown dresses, shaped like bags, so men won’t see their blossoming figures and be tempted. Their grandmother forces them to learn how to be a housewife, teaching them to cook, make beds and clean in their spare time.

The girls become agitated, longing to explore a life outside their imprisoned home. When a big soccer game comes to town, the sisters decide to sneak into town to watch it. Their older male friend picks them up and takes them to the bus. At the game, the sisters dance, laugh and cheer for the soccer team, bringing the first smile to their face in months. Little do they know, their grandmother is at home watching the game too. After the camera cuts away to the sisters faces, the grandmother runs and cuts the wires so all the televisions in the neighborhood can’t show the game. She does this for their protection, knowing if their uncle saw them at the game, he might abuse them.

After the girls sneak back home that evening, the grandmother decides to carry out ridiculous measures to make sure they can never leave again. She orders a high fence built around the home, bolted windows and spikes along the wall, treating them like prisoners.

From here on out, the girls are no longer free to go anywhere. Their happiness slowly depletes as the grandmother begins showcasing them to her friends, determined to marry them off one by one. The eldest sister is married, the youngest sister throws a fit until she convinces her grandmother to let her marry her boyfriend (she is the lucky one) and the third sister shoots herself in the head, finding death a better ending to her life then a forced marriage. Even after the death of the third sister, the grandmother and uncle still feel no obligation to keep the younger two sisters around, showing the intense loyalty towards the Islamic religion even over the idea of doing the right thing.

On the eve of the fourth sister’s arranged wedding, the youngest girl decides to take action to free herself and her sister from their life under Islamic tyranny.

MUSTANG is an exceptional movie combining insights into life in an Islamic society with a heart-racing plot creating heightened suspense. Narrating the movie is the youngest daughter, whose sweet, helpless voice emphasizes the thematic element of loss of innocence. MUSTANG shines a light on pressing issues in Islamic societies, but it offers no real solutions other than a Romantic, somewhat feminist view of simple escape and antinomian freedom. Of course, in Christianity, God orders people to treat women with respect, offering them liberty to willingly serve Jesus Christ without the kind of evil, tyrannical order one finds in Muslim homes, especially strict ones adhering to anti-biblical Muslim Sharia Law.

Extreme caution is advised for MUSTANG.