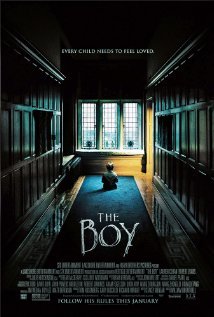 In THE BOY, a wealthy couple in England hires a young American woman, Greta, as a nanny for their 8-year-old son, Brahms. Greta sees this as an opportunity to escape financial woes and an abusive ex-boyfriend in Montana. Upon arriving, she learns that Brahms is not a real boy, but a porcelain doll she’s supposed to nanny as if he were alive. Although disturbed by the all this, Greta plays along. The Heelshires leave for an extended vacation, putting Brahms’s care solely in her hands. Greta dismisses the doll at first, but strange, unexplained things begin happening around the house. The situation becomes even more dangerous when Greta learns Brahms may have had a violent past.

The first hurdle for THE BOY is getting past the absurd plot. The story is so absurd that it makes viewers fearfully wait for another shoe to drop. Sadly, this other shoe doesn’t drop until the very end, and it doesn’t drop very far. THE BOY also contains some bloody violence, foul language, occult references, and scary situations, so extreme caution is advised.

(B, C, OO, LL, VV, S, A, M) Light moral worldview, one scene shows a couple praying and mentions Jesus, but the prayer is quoted more like a ritual than a deeply held religious belief, and plot revolves around the possible presence of the spirit or ghost of a dead boy, and a man flirts by pretending to do a psychic reading on a woman's chewed gum; 19 obscenities and profanities; strong, intense scary violence includes couple commits suicide by drowning themselves, a hand punches through a painting and grabs a woman's throat, a dead rat is pulled from a trap, several dead and bloody rats are put in a man's bed, words are written in blood on a window, a man smashes a porcelain doll, man is stabbed in neck with a piece of glass and killed, three men fight with each other and deliver blows, a man is killed by being stabbed twice, man tries to choke a woman to death, man throws a woman across the room into a wall; a couple intending fall onto bed together but are interrupted; casual wine drinking in a couple scenes; no smoking or drugs; nanny disobeys the instructions of her employers, woman got pregnant with her abusive boyfriend in the past, man physically intimidates a woman.

In THE BOY, a young woman takes a job as a nanny for a wealthy English couple only to discover that their son is a doll, who may or may not be haunted. The plot in THE BOY is almost too absurd to be taken seriously, and there’s a lot of scary violence, with some foul language, so extreme caution is advised.

Greta is a young American woman who has just been hired by an elderly English couple, the Heelshires, to be a nanny to their 8-year-old son, Brahms. She arrives in the UK glad to escape her abusive boyfriend back home in Montana and eager to make some desperately needed money.

The gothic manor house is out in the country, a decent car ride from the nearest village, and offers nothing in the way of cell phone reception. Finding the house empty at first, Greta explores around on her own and is startled out of her admiration of Brahms’ antiquated room by Malcolm, a local grocery shop owner who makes deliveries once a week. The two hit it off right away, and Malcolm makes several attempts at flirting, offering to help her get settled in her new role.

Mr. and Mrs. Heelshire soon return to the home and introduce Greta to their son, a life-sized porcelain doll. Greta can’t help but laugh at the absurdity, believing it to be a joke until it becomes absolutely clear that it’s not. The Heelshires have a daily routine for Brahms, including meals, studies and nightly bedtime rituals.

Cautiously observing the family from a polite distance, Greta is deeply disturbed yet plays along with her employers. She is quick to call her sister that night to explain her predicament, but her sister reminds her of why she took the job in the first place. It is also revealed that her abusive ex-boyfriend, Cole, has been aggressively looking for her.

To Greta’s mild relief, the Heelshires have planned a lengthy vacation and expect her to stay with Brahms, following every rule they’ve laid out. Once alone with the doll, Greta immediately drops the pretense and dumps him in a chair, going about her day. As night falls, she starts to notice small things out of place. The doll’s position has changed, things are missing, and obscure noises fill the house. As each day passes, Greta continues to ignore her responsibilities caring for the doll, and the strange occurrences start becoming more prominent.

Thinking that someone else is in the house, Greta calls on Malcolm to help her look for the intruder, but he’s unable to find anyone. He tells her the real Brahms died in a mysterious fire more than 20 years ago, and the Heelshires have been using the doll as a substitute.

Eventually, Greta comes to the conclusion that Brahms’ ghost must be living through the doll, since it’s the only explanation for what’s been happening. As Malcolm and Greta’s relationship moves beyond simple friendship, Malcolm comes to believe that Brahms is somehow still alive when he experiences the same haunting tricks while in the house. The two begin to care for Brahms the way his parents did. However, their bizarre domestic world is turned on its head when Greta’s violent American boyfriend, Cole, unexpectedly appears. He intends to take Greta back home, forcing her to abandon Brahms. Soon it becomes horrifyingly clear that Cole isn’t the only unexpected presence in the house.

The first hurdle for this horror movie is getting past the absurdity of the plot. Just like Greta’s first reaction to seeing the doll for the first time, the whole thing is more laughable than believable. It is because the premise is so absurd that there’s a dreaded feeling of waiting for the other shoe to drop throughout the whole movie. No one can be as demented as the Heelshires, who otherwise seem like wealthy, educated, upstanding people. Therefore, there must be something extremely wrong happening and it would be foolish to buy into such a superficial story. Sadly, this other shoe doesn’t drop until the very end, and it doesn’t drop very far. It’s a case of too little too late, and some disappointment that the plot really is that ludicrous.

As to be expected in most horror movies, the occult takes a large part in the plot. There is a semi-serious reference to tealeaf reading, and midway through the movie the characters start believing in the presence of a spirit haunting the doll. However, this theory is debunked at the end of the movie, and the focus moves from the occult to violence. Dead rodents show up, and people are killed by stabbings with sharp household objects. One scene very briefly shows the Heelshires praying with the doll by his bedside. Jesus is referrenced, but the prayer is a stock childhood prayer that’s quoted more out of ritual than any deeply held religious beliefs. The foul language, violence and scary nature of THE BOY warrant extreme caution.