EMBRACE OF THE SERPENT 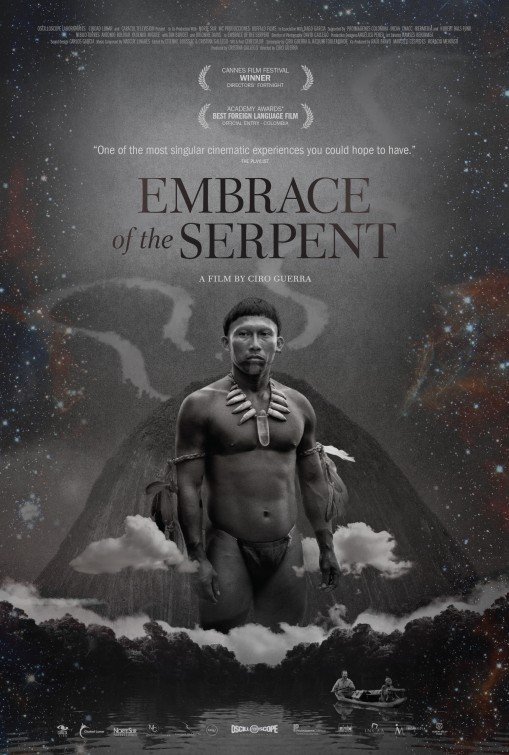 EMBRACE OF THE SERPENT is a movie from Colombia. In 1909 in the Amazon rainforest, a sick German anthropologist, Theo Koch-Grünberg, and his devoted Indian friend meet a shaman named Karamakate, who takes them in search of a psychedelic plant that may help cure Theo. Forty years later, an American biologist, Richard Evans Schultes, approaches an aging Karamakate to help him find the same plant, which was mentioned in one of Theo’s books. The rest of the movie tells what happens to these men.

Both Koch-Grünberg and Schultes were real-life scholars, but EMBRACE OF THE SERPENT is fictionalized. It suffers from telling two separate stories and meanders between them. Eventually, Schultes drinks one of the shaman’s psychedelic concoctions and has a mystical vision, but it’s not clear what kind of enlightenment he achieves. Mostly, the movie is a Romantic, politically correct, environmentalist validation of the mystical pagan lifestyles of Amazon Indians. During Theo’s trip, a Catholic priest running a mission by himself viciously whips an Indian boy, and the shaman kills him. EMBRACE OF THE SERPENT is too scattered and unacceptable.

(RoRoRo, PCPCPC, EEE, OOO, PaPaPa, AcapAcapAcap, AbAb, FRFR, RHRHRH, L, VV, S, NN, DDD, MM) Very strong Romantic, politically correct, environmentalist worldview that validates mystical paganism (which is strongly suggested to be “closer to nature” and more respectful of nature than Western capitalism) against capitalist development because capitalists are totally bad, including scenes with Catholic priest running mission by himself, who whips Indian boy for being seduced by paganism, but priest is murdered and decades later the decrepit mission left by the priest has devolved into a cult mocking both Christian teaching about Jesus and paganism, and the cult is described as being the “worst of both worlds,” plus revisionist history is used to promote the movie’s Romantic, politically correct, environmentalist worldview; one “d” word and one “h” word; brief strong violence includes Catholic priest whips boy, pagan priest hits Catholic priest over head, and he apparently dies, soldiers come through village shooting people, dead bodies, Indian has apparently been deformed and whipped by so-called “rubber barons,” cult leader pretends to be some form of new messiah like Jesus and is eventually killed; pagan shaman orders sick European to abstain from women, or he won’t help him, and images of semi-nude Indian women; upper female nudity in two or three scenes, rear nudity, partial rear nudity, upper male nudity; no alcohol; no tobacco smoking, but movie promotes use of hallucinogenic drink and plants, plus pagan shaman repeatedly blows smoke into European’s nostril, and European has mystical visions after drinking hallucinogenic drink; and, pagan priest refuses to help sick man unless man does what he tells him to do, anti-colonialism promoted in a left-wing sort of way, madness.

EMBRACE OF THE SERPENT is a fictionalized portrayal from Colombia of two white explorers in the Colombian Amazon, who encounter an Amerindian priest 40 years apart while looking for a psychedelic plant. It’s a Romantic, anti-Western, anti-Christian, pagan movie about the evils of Western colonization on indigenous peoples with striking interludes that ultimately don’t really seem to go anywhere.

The movie opens in 1909 with a sickly German anthropologist named Theo Koch-Grünberg and his friend Manduca rowing to meet a shaman named Karamakate. The shaman angrily tells them to leave, but Manduca convinces him that Theo needs Karamakate’s knowledge of plants if he’s going to survive. Theo also tells him that they can locate the remnants of Karamakate’s tribe.

The shaman takes them under his wing, but he warns Theo that he must do what he says if he wants his help. Abstaining from women is one of Karamakate’s demands, along with not eating any of the fish along the river. Theo takes them to the tribe, then Karamakate takes them in search of a sacred plant called yakruna.

Forty years later, an American biologist, Richard Evans Schultes, approaches an aging Karamakate to help him find the yakruna plant mentioned in one of Theo’s books. The rest of the movie tells what happens to the two white men on their trips with Karamakate.

Nominated for a Best Foreign Language Oscar this year, EMBRACE OF THE SERPENT is a meandering black and white movie set in two different time periods. It’s told from the pagan shaman’s point of view, so it contains scenes talking about how the rubber barons decimated the indigenous population. There’s also scenes of ingesting psychedelic concoctions from the shaman, as well as scenes of a Catholic priest whipping a boy for being corrupted by the shaman’s pagan religion, references to pagan gods and talk about how the indigenous Amazon tribes are much more respectful of the natural world around them. Some of this may be partially true, but while embracing the shaman’s pagan society and religion, the filmmakers don’t really show why the lifestyles of these indigenous tribes are all that superior. Thus, it’s a Romantic, politically correct view of the “noble savage” that doesn’t really match reality, including historical reality. Did Westerners, including European Christians, often abuse the indigenous tribes throughout North, Central and South America? Of course. However, the people in these tribes also had evil among themselves, and most of them died because of European diseases, not human causes.

EMBRACE OF THE SERPENT suffers from trying to tell two separate stories. It meanders back and forth between them. Also, in reality, contrary to the movie’s implication, Theo conducted a second expedition in 1911-13, then died during another expedition in 1924. Schultes spent a lifetime researching the healing and psychedelic properties of South American plants. A scene at the end of EMBRACE OF THE SERPENT shows him having an incredible psychedelic experience after drinking a hallucinogenic concoction Karamakate prepares from the yakruna plant. However, a 1996 story in the Los Angeles Times reports that Schultes once told psychedelic author William Burroughs, who related one of his mystical hallucinogenic experiences with one of the plant concoctions Schultes researched on his trips to the Amazon, “That’s funny, Bill, all I saw was colors.” Schultes also denigrated Timothy Leary, the guru of the “Turn On” hippie generation, and his advocacy of hallucuinogenic drugs for “enlightenment” (Jonathan Kendell, “Richard E. Shultes, 86, Dies,” New York Times, 04/13/01, http://www.nytimes.com/2001/04/13/us/richard-e-schultes-86-dies-trailblazing-authority-on-hallucinogenic-plants.html).

Thus, EMBRACE OF THE SERPENT doesn’t seem to be a very reliable account regarding the facts. Its apparent distortion of the facts seems to be an attempt to promote its Romantic, politically correct worldview and endorsement of hallucinogenic drugs to obtain enlightenment. At the end, however, it’s not quite clear what kind of enlightenment Richard Evans Schultes achieves when he drinks from the pagan priest’s concoction. Before drinking it, the pagan priest tells Schultes to “embrace” the serpent god who was apparently responsible in some way for the creation of the world. This origin myth apparently derives from the Cubeo tribe in the Colombian rainforest along the Amazon, but the movie never really specifies a real tribe as far as MOVIEGUIDE® could determine in its research for this review. Of course, the “serpent” that the filmmakers actually seem to be embracing with this cinematic concoction is Satan. In that respect, their use of this particular title, EMBRACE OF THE SERPENT, for their movie seems to be very telling.

In reality, some (if not many) of the origin myths among the Amazon Indians reflect an original belief in ethical monotheism that’s been eroded by pagan superstition and other Satanic lies. Some of them even have a flood story among their folklore, an interesting memory that seems to go back to the days of Noah, as recorded in the historical accounts of early human history in the first five books of the Bible. If God scattered the human race, as depicted in the story of the Tower of Babel in the Book of Genesis, then finding stories of a great flood among isolated tribes in the Amazon rainforest is too big of a coincidence to ignore.