"A Whimsical Reminder of the Necessity for Childhood" 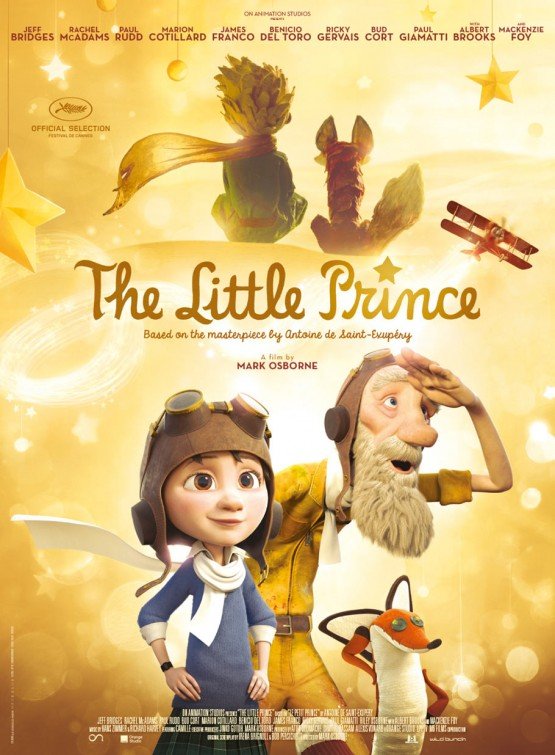 THE LITTLE PRINCE promotes a strong moral worldview, with displays of courage and love. Delightfully mixing reality with imagination, THE LITTLE PRINCE is brilliantly animated, with stunning scenery and alluring characters that hold the viewer’s attention throughout the movie. A few scenes may be dark and intimidating for younger children, but they lead to a fruitful end with several takeaways. For instance, THE LITTLE PRINCE reminds viewers miracles are possible and hope is necessary, especially when the future’s unclear.

(BBB, C, H, M, V, ACap, M) Very strong moral worldview stressing love, courage, hope, commitment, and a light redemptive belief in the possibility of miracles, with some light existential humanist elements; business man is seen as greedy and taking over; no foul language; a few violent actions, including a small drop of blood, an animal being eaten by another and some screwball comedy that involves dropping a bowling ball on someone’s head; no sexual content; no nudity; no alcohol; no smoking or drugs; and, very little immorality, but the lead character does lie to her mother and steal a bike; broken family as father has left family.

A little girl lives with her single mother in a world where time is money. Most everyone wears grey suits, all the cars are the same boxy shape, and it’s suggested that the best accomplishment to be had in this world is becoming a good grownup. The mother does her best to prepare her daughter for adulthood, including moving into a better school district. Before the next school year starts, the little girl has her entire summer planned out with studying and preparation filling every minute of every day. The little girl does her best to follow the plan, but the plan could not have accounted for the aviator living next door.

Just a few days after moving, the mother and daughter’s house is almost destroyed by the man next door trying to start the engine of his airplane in the backyard. The mother’s determined to ignore this interruption, but the little girl can’t help but be curious about the man next door. This curiosity is further encouraged when the aviator sends the girl a paper airplane containing the beginning of a story about a little prince. After the girl visits the aviator and sees his enchanting garden with the rundown plane, she can’t help but hear the whole story.

As the movie cuts back and forth from story to reality, the little girl and aviator become closer friends and the desire to become a grownup diminishes. The main character of the story, the little prince, is a small boy who loved a rose, but because of the rose’s vanity, he left her to go on a wild adventure. The little prince met several different characters along his way, many of them adults whom the little prince declares as very odd. The adults display characteristics such as gluttony, egotism and disbelief. The little prince also meets a snake and fox along his journey. The snake represents temptation, while the fox represents commitment. This leaves the little prince to make the ultimate decision between the two.

When the little girl’s reality and the original story both lead to an unsatisfactory end, the little girl and her imaginary friend fox take it upon themselves to seek out an ending as they see fit.

THE LITTLE PRINCE promotes a strong moral worldview through the stories of the little girl and the little prince, with displays of courage and love. By listening to the stories of the aviator, the girl discovers what it means to truly love and be loved. The little girl fights for what she believes, and in so doing, teaches others how to believe again. There are a few scenes that may be dark and intimidating for young children, but they lead to a fruitful end with several takeaways. There is a strong emphasis of children staying young, with vision and imagination.

THE LITTLE PRINCE is brilliantly animated with stunning scenery and alluring characters that maintain the viewer’s attention throughout the movie. The movie goes from stop-motion animation to 2-D animation. Overall, the movie is beautifully done. Through its dialog and characters, THE LITTLE PRINCE reminds its audience that miracles are possible and hope is necessary, especially when the future is unclear. Though this is the case, the movie is a bit esoteric and could have been edited towards the ending to create a better story line flow.