"Too Many Expletives, Too Little Honesty" 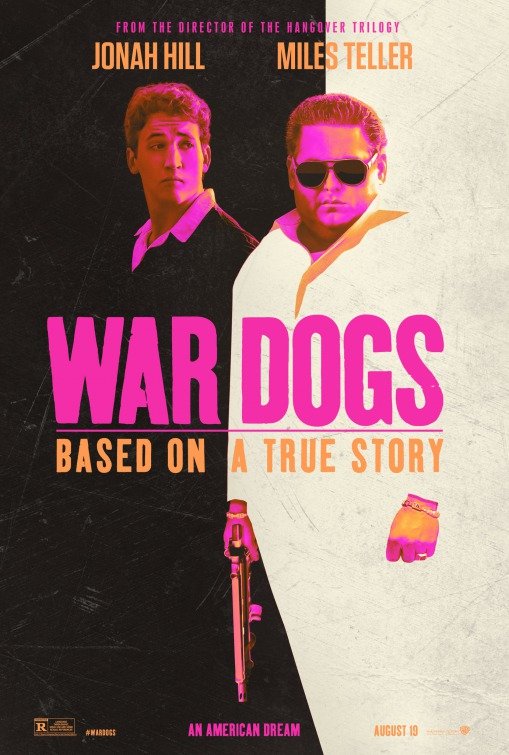 WAR DOGS is about two young Jewish men who knew each other in high school and reconnect at a funeral. David is a married massage therapist unhappy with his job. Efraim entices David with his tales of how easy it is to make it big in weapons and ammunition sales. David joins Efraim’s company and proves to be a perfect fit, so business is booming. When they meet a shady arms dealer, they embark on a major deal that could make them millionaires. At this point, they’re willing to do whatever it takes, including breaking the law.

Told in a brisk style, WAR DOGS is well made and pithy. It features some good performances, especially by Jonah Hill. The movie’s energy and exuberance is often funny and entertaining. It also includes a positive redemptive ending. Thus, doing bad is punished. Also, David learns the error of his ways, deciding to dedicate himself to his family and being honest. However, the repeated lying, coupled with abundant foul language and lots of marijuana use, weighs the story down. So, WAR DOGS warrants extreme caution.

(BB, C, PaPa, PC, LLL, VV, S, N, A, DD, MM) Strong moral, slightly redemptive worldview where one protagonist learns the errors of his ways to re-commit himself to honesty and family life, and doing bad is eventually punished, but he and other characters often choose to do the wrong, immoral thing during the rest of the movie, some gratuitous politically correct leftist content, and a male homosexual advance is implied by a massage client; at least 150 obscenities (including many “f” words) and seven profanities; strong violence includes gunfights, target practice, machine guns fired at people, a dead man is shown with bullet holes, an office window is smashed when an angry character throws an object through it, a man is kidnapped and stuffed in a trunk, some characters are punched in the face, and a character is gun whipped; sex with a prostitute is implied behind closed doors, pole dancing by scantily clad females, and a male homosexual advance is implied by a massage client; rear male nudity and some scantily clad females; alcohol use; strong drug consumption includes cocaine and marijuana use; and, strong miscellaneous immorality includes frequent lying for personal gain and to avoid reproach from wife, deceit, betrayal, and greed.

Some people love movies based on true stories because truth is often stranger than fiction. A true story can also bring to the surface some positive universal truths, such as: good begets good, doing wrong hurts, lying has a corrosive effect that sooner or later will come back to haunt the liar; and, it’s often a matter of time before unbridled greed eventually destroys those in its grip. Such is the case with the new action comedy WAR DOGS, at least in part.

In the story, David Packouz and Efraim Diveroli are two twentysomething Jewish men from Florida with hardly any experience. Working from a company with a name that intentionally “doesn’t mean anything,” they are contracted by the Pentagon and manage to pull off the arms deal of the century.

Told in a brisk style, WAR DOGS is well made and pithy. It also takes viewers to various locations in the Middle East and Europe, while the characters never reveal much more than what is absolutely necessary to advance the plot. Their energy and youthful exuberance are often funny and entertaining, but their repeated ditching of scruples and truth, coupled with an unending stream of expletives and lots of marijuana use, weighs the story down and detracts from its appeal, despite its redemptive ending.

David Packouz (Miles Teller) is a certified massage therapist married to a lovely wife, Iz (Ana de Armas). He’s trying to make ends meet by keeping massage appointments for wealthy Miami Beach residents, who occasionally make racy sexual advances. Because of this, he doesn’t much care for his job. So, he decides to strike out on a business of his own by purchasing a gross of cotton made Egyptian bedsheets and hopefully sell them for a good profit. Sadly for him, there’s not much demand for the 400 count sheets at that time of year, or maybe he’s got the wrong customers, but in any case he fails miserably.

As fate would have it, David attends a local funeral, where he encounters Efraim (Jonah Hill), an old buddy from high school he’s not seen in years. Efraim doesn’t have a very good reputation. In fact, those who know him remember him as a rather conniving, duplicitous fellow. However, he’s very charming and can talk a rose out of its petals. So, it’s not long before David comes under Efraim’s influence, especially when he sees him flashing 100 dollar bills and telling stories of how easy it is to make it big in his business, namely weapons and ammunition sales.

As it turns out, the U.S. government recently decided to modify its arms procurement and ammunition purchases because of complaints that some companies had all the contracts, locking small vendors out of the bidding. So, the government started posting the available contracts online, and Jonah has tapped into this veritable treasure trove by bidding for thousands of lucrative contracts, many of which are small enough for him to handle, yet highly profitable.

This is all well and good. The problem, and the weak link, however, is Jonah’s character. Jonah doesn’t care for anything or anyone, but himself. He has no problem deceiving and lying. He also has a chameleon personality that will say or do anything to ingratiate himself with whomever will help him further his goals for whatever the reason.

For example, Efraim’s financial backer, Ralph Slutsky (Kevin Pollak), is the owner of a dry cleaning chain and an ardent supporter of Israel. Ralph is convinced Efraim is in business to support Israel, when actually Efraim could care less. Worse is his greed, which is about as a bad as any human being can have.

David, on the other hand, has a much more decent personality. Working with Efraim, however, it’s hard to keep it. So, maintaining the truth with his wife, who’s now about to have a baby, is getting harder, especially after she begins to catch David lying.

Nevertheless, the two emerging tycoons are on a roll, and nothing will deter them from rocketing to the top, so long as nobody pays much attention to what they’re doing. So, they soon find themselves landing bigger deals and going to places like Jordan and Iraq, where they are fortunate to make it out alive. Eventually, their success earns them the right to swim with the big fish.

In Vegas, they meet shady arms dealer Henry Girard (Bradley Cooper), who’s exactly what they need. That’s because, not long before they met him, David had found the biggest possible weapons contract ever online for the sale of a massive amount of ammunition to Afghanistan. Getting such a contract, however, would be impossible for them to get, what with their thin background and prior lack of major contacts. This isn’t true any more, however, because they now have Girard, who can’t bid for things himself because he just happens to be on the terrorist watch list.

With Girard on their team, David and Efraim embark on the project that’s bound to make them all millionaires for life. At this point, the men are willing to do whatever it takes to succeed, including breaking the law.

WAR DOGS, which is a metaphor for those who deal in weapons but don’t participate in war themselves, is well made. Jonah Hill as Efraim steals the show with a fast lip and turn of phrase that are disarming and a bravado that’s a smoke screen for his insecurity and lack of knowledge. Jonah’s shallow character is breathtaking and his greed, which is also the source of his ultimate undoing, comes across loud and clear.

That said, there is probably much more that Director Todd Phillips could have explored in Efraim’s psychology, as well as that of some of the other actors. For instance, Ana de Armas, who plays David’s wife, is reduced to not much more than a bystander, constantly being kept in the dark by David. The same thing goes for Bradley Cooper’s character as the shadowy Girard. The other actors, however, are excellent in their respective roles.

The most unfortunate thing in WAR DOGS, though, is its unending stream of obscenities. It makes no sense to use such abundant foul language, because it adds nothing to the script or story, and even detracts from it.

There was also no need to have the protagonists express their opposition to the Bush Administration. That’s to be expected from liberals in Hollywood, perhaps, but it was unnecessary to advance the story. Why go out of your way to deliberately antagonize a large section of the moviegoing audience?

On a positive note, David’s character eventually learns the error of his way, decides to stop lying to his wife and dedicates the rest of his life to his family. Also, doing bad is eventually punished.

WAR DOGS has a strong moral worldview, with a redemptive ending, but extreme caution is advised because of the movie’s objectionable content.