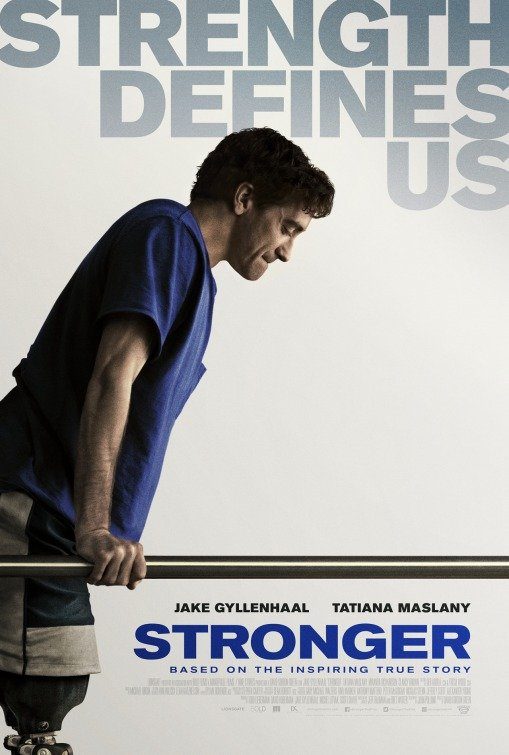 STRONGER tells about Jeff Bauman, a food employee who becomes a national hero after the 2013 Boston Marathon bombing. Jeff works at Costco in the kitchen but fouls up simple tasks. He also recently fouled up his relationship with Erin, who plans to run in the marathon. To win her back, Jeff takes a sign to the finish line to welcome her, but he loses both legs when one of two bombs explodes. Jeff becomes a hero for identifying one of the terrorists, but struggles with recovering from his own wounds.

STRONGER does some things well and falls short with others. One striking component is the authenticity of the doctors, nurses and physical therapists who attend to Jeff. The movie brings Boston to life, with some uplifting elements. However, the movie seems to gloss over bits and pieces that might make Jeff’s struggles and recovery more emotionally powerful. His transformation comes too late to be totally satisfying. STRONGER also contains frequent foul language, some gruesome violent images in one scene, heavy drinking and a bedroom scene. MOVIEGUIDE® advises extreme caution for STRONGER.

(H, B, C, PP, Ho, LLL, VVV, SS, NN, AA, DD, MM) Light godless worldview with no apparent biblical standard of morals, but some elements of a good vs. evil plot regarding the capture of Muslim terrorists, friends and family show sacrificial love and support, a man saves the life of someone, and American and Bostonian patriotism is shown in several scenes, plus there are some jokes about homosexuals in a few scenes; at least 103 obscenities and 11 profanities plus two scenes depict vomiting with one showing the vomit, and one scene shows a man on the toilet; one scene depicts explosions at a marathon, another scene graphically shows the victims of the bombing with missing limbs and lots of blood, there are some squeamish scenes in the hospital regarding medical procedures, and there’s a bar fight in one scene; depicted fornication in one scene; partial nudity during sex is depicted, and one scene shows the entire naked front of a man lying in a bathtub with a thin layer of steam making it barely hazy enough to obscure a clear view; several scenes depict drinking at bars or at parties, and several scenes show drunk characters; cigarette smoking is depicted in several scenes, illegal drug pills are taken in one scene; and, one brief racist comment about Mexicans is made, unmarried woman gets pregnant after sex, a man lies to his boss and family, an unmarried couple moves in together, and parents are divorced.

STRONGER tells the real-life story of Jeff Bauman, a Costco food employee who would become a national hero after the Boston Marathon bombings in 2013. STRONGER is an inspirational drama, but it contains strong content that warrants extreme caution, even for adults but especially for younger moviegoers.

As the movie opens, the 28-year-old still lives at home with his mother in their tiny Boston apartment. During the day, he barely manages to be competent enough to keep his job in the Costco kitchen, often messing up the simplest tasks. At night, he moonlights at a local bar where his friends all gather for a beer and Red Sox games. One such a night, his on-again, off-again girl, Erin, comes in looking for donations for her marathon run the next day. Having recently messed up his relationship with Erin, Jeff is desperate to win her back. He tries to impress her by getting everyone at the bar to donate, but Erin isn’t so easily won over.

Erin’s biggest complaint about Jeff is that he never shows up for anything, so he makes a promise to show up at the marathon finish line to cheer for her. Erin doesn’t believe him; Jeff’s let her down too many times in the past. Proving her wrong, Jeff makes a huge sign for her and shows up just before she makes her final turn in the race. In the crowd, Jeff is bumped by a man in black and wearing shades to hide his face. Jeff quickly dismisses the incident, but a minute later two blasts go off. Erin stops in her tracks. Later, she sees what would be Jeff’s famous photo on the news and rushes to the hospital to find him. There, she meets up with Jeff’s family and friends.

The doctor delivers the tragic news of Jeff’s double amputation. When he wakes up, Jeff lets them know he saw one of the terrorists. He’s promptly interviewed by the FBI. In the background, the TV plays the news of the manhunt while Jeff deals with the first pains of recovery. His family beams with pride when they realize that he’s a hero for helping the FBI identify one of the terrorists. For once, he’s not a screw-up.

The press swarms Jeff, and suddenly he’s become the national symbol of hope for Boston. Though he’s being paraded around town at various public events, he’s secretly dealing with depression and anxiety. Only Erin picks up on this problem, and it becomes the catalyst that drives the two back into a relationship. Jeff’s wounds are external, but it’s the internal battle that’s the most difficult for him to overcome.

STRONGER does some things very well, and falls short with others. One striking component is the authenticity of the doctors, nurses and physical therapists who attend to Jeff. They look and sound real, and they are. Director David Gordon Green chose to cast actual medical personnel, and his decision pays off impressively. The movie also brings Boston to life in a way that’s reminiscent of GOOD WILL HUNTING and other well-produced movies about Boston. The accents are on par, the sports enthusiasm is palpable, and the working-class grit shines. Jake Gyllenhaal’s performance is gut-wrenching and passionate. However, it feels like it’s hiding a secret about Jeff’s emotional and mental evolution as he deals with his new disability. There are a lot of external manifestations of his inner turmoil, but little insight into their cause other than the obvious: he’s lost his legs.

Jeff goes through a lot of changes, and the movie seems to gloss over bits and pieces that would make Jeff’s plight more emotionally relatable to viewers. The biggest disappointment is that only a short period of time toward the end does the movie become devoted to Jeff “overcoming” his disability. Most of the time is allotted to Jeff’s depression and screwed up life. It would have been nice to have more of the inspirational part and less of the woe-is-me drama. Thus, Jeff’s transformation comes too late in the movie to be totally satisfying.

Also, STONGER clearly is opposed to the days of inspirational movies like RUDY where foul language wasn’t necessary to tell a good story. Thus, the movie purposely chooses to be as “real” as possible and skip any attempt at being more old-fashioned, lest it be accused of being trite and cliché. While the movie might win some Oscars for doing this, it’s really a shame that such an interesting story has to be wounded by content that’s decidedly not family friendly. It’s not in vogue anymore to clean up reality for propriety’s sake in the movies. Thus, the movie is designed for adults only. It’s too bad that younger viewers can’t watch STRONGER and be inspired by Jeff’s story, especially if they have their own disabilities to overcome. That’s the price filmmakers and society pay for movies that try to avoid being called old-fashioned, trite or cliché.

The foul language is very heavy throughout STRONGER, along with drinking, smoking and tough scenes regarding the issues surrounding amputation. Despite the bombings being a major part of Jeff’s story, only one relatively short scene depicts the bloody, grotesque aftermath. It’s graphic, however, and shows Jeff’s legs missing their feet, along with the bloody wounds of other bombing victims. There’s also one sex scene with partial nudity, and a scene in the bathroom where Jeff’s entire naked body is barely disguised by the stream from a bathtub.