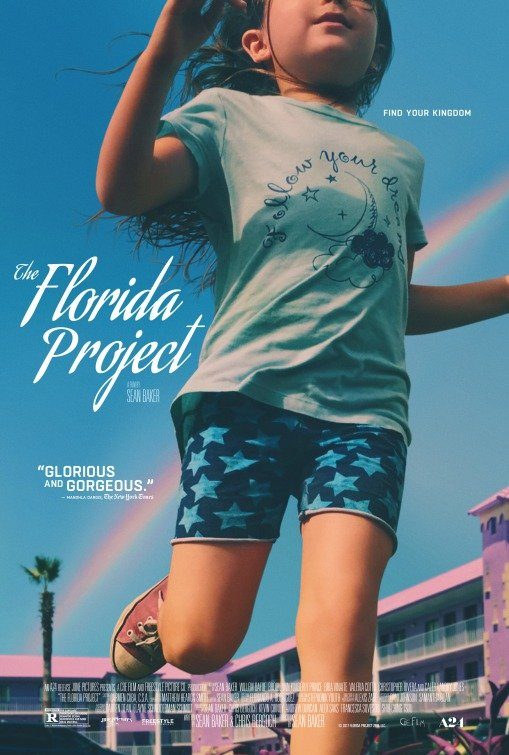 THE FLORIDA PROJECT is an independent drama about the struggles of the impoverished residents of a budget motel. The movie follows 6-year-old Moonee as she tries to hold on to her childhood despite her mother Halley’s financial situation. As Halley gets more desperate for rent money, the threat of Child Protective Services becomes more and more present. It’s only a matter of time before Moonee has to grow up too fast.

Told through eyes of 6-year-old Moonee, THE FLORIDA PROJECT is a fascinating movie to watch for its realistic portrayal of the “hidden homeless” of Florida. With great performances by the cast and excellent execution by Writer/Director Sean Baker, the movie does a lot of things well. Sadly, the scene-by-scene examination of life without a dramatic through-line becomes tiresome. THE FLORIDA PROJECT has children characters, but it isn’t a movie for children. There are no good role models to be found. Even the children are reckless, unsupervised and encouraged to do bad. The subject matter in THE FLORIDA PROJECT is gritty, dark and intense, with excessively immoral themes reserved only for adults.

(PaPaPa, B, LLL, VV, SS, N, AA, DD, MMM) Very strong pagan worldview with emphasis on wealth, personal gain and immorality, plus one man tries to do the right thing but his efforts are ultimately unsuccessful; at least 72 obscenities and profanities (including many “f” words and two or so Jesus profanities), plus obscene gestures often from children, depicted vomiting, distasteful moment involving a woman’s used maxi pad; three scenes of violence including a girl getting beat up, and a parking lot fight that results in someone getting run over by a car; strong sexual material includes implied prostitution, promiscuity, young children talking about naked girls and breasts, a woman mentions “dancing for tips,” adults mention “getting laid” around children, and a scene involving an implied pedophile trying to talk to children at motel and being kicked out by an adult; a scene involves a topless woman at a pool with children watching (breasts are not actually shown) and scenes of partial nudity with girls in bikinis and encouraging children to show off swimsuit selfies; adults are seen drinking in most scenes and young children talk about having a “party with beer”; most main characters of the movie smoke cigarettes on a regular basis, references to smoking marijuana “blunts” and doing drugs; and, numerous moral issues depicted in the movie including young parents of children teaching and encouraging poor behavior in their children such as lying and stealing and disrespect, numerous scenes of children being disrespectful, vandalism, and arson.

THE FLORIDA PROJECT is an independent drama focusing on the “hidden homeless” of Orlando, Florida through the eyes of 6-year-old Moonee (Brooklynn Prince) and her friends. Moonie and her 22-year-old single mother, Halley (Bria Vinaite), live in the poverty stricken budget motels on the wrong side of Disneyworld. Although the fireworks and magic are within throwing distance, Moonie lives a life filled with magic that she creates for herself, despite the shocking, gritty reality around her.

The movie focuses on Moonee’s adventures with her friends, almost unaware of the poverty they suffer due to her mother, Halley’s, unemployment. Moonee’s innocence is constantly juxtaposed with depictions of plight as Halley struggles with paying rent every week, mostly through questionable situations. The property manager, Bobby (Willem Dafoe), also plays a significant role in Moonee and Halley’s lives as he desperately tries to maintain order while also protecting the young children. As Halley gets more and more desperate for rent money, she drags Moonee into her get-rich-quick schemes that often involve stealing, conning and sometimes prostitution. The threat of Child Protective Services becomes more and more present throughout the movie as until it’s only a matter of time before Moonee has to grow up too fast.

After its premiere at the 2017 Cannes Film Festival, THE FLORIDA PROJECT has been well-received by audiences and critics, many touting it as one of the best movies of the year. One of the movie’s most powerful aspects is how Writer/Director Sean Baker is able to tell such a raw story from the eyes of a child. Although viewers are focused on Moonee most of the movie, as she plays with her friends and tries to get money for ice cream, they become aware of the larger, more bleak reality of the life she lives. Moonee doesn’t quite realize her situation, but mature viewers will, and that makes her sustained joy and childlike wonder even more magical to watch on screen. The dramatic irony of heavy, adult themes told from the perspective of a child provide a truly dynamic character experience.

The slice-of-life moments between characters are helped by incredible performances by a cast of non-actors, with the exception of Willem Dafoe, who is fantastic in his role as Bobby. These performances make unique, complex characters shine throughout the story. Halley is both a terrible mother but also a loving one. Bobby is tough on Moonee but also fiercely protects the children from harm. Moonee is an innocent child who isn’t aware of the consequences of her actions, but also acts out, behaves with terrible disrespect and often causes serious harm. The movie simply presents what life is like for these people who actually exist in the world. It asks the audience to make their own judgements about the characters and situations, which makes for an engaging experience.

While there are many things to appreciate about THE FLORIDA PROJECT, it isn’t without flaws. The movie focuses so much on depicting the characters and everyday life, it lacks narrative momentum. The novelty, charm and horror of the characters and the milieu is enough to sustain the viewer’s interest for the movie’s first half, but the story loses some steam after a while. Instead of a clear story with satisfying character arcs, the movie plays out more like a collection of scenes. The lack of a dramatic through-line leaves the movie lacking a crucial element with an unsatisfying resolution. Of course, the movie’s point is to simply depict what life is life in this corner of the world, and these people don’t get a clear resolution in their lives. As a result, THE FLORIDA PROJECT works for awareness of poor children at risk, but the doesn’t fully satisfy as a story.

From a content and worldview perspective, there are many red flags regarding THE FLORIDA PROJECT. For a movie focused on childhood, there are a lot of adult themes to stomach throughout the story. There are no good role models to be found in the parents who are drinking, smoking and even prostituting themselves with children nearby. Halley is obviously irresponsible and refuses to get a proper job.

Furthermore, the children themselves are reckless, unsupervised and even encouraged by their irresponsible parents to use foul language, obscene gestures and other types of bad behavior. When Halley tries to scam local tourists into buying knock-off perfume, she brings Moonee along and teaches her how to con to get what she wants. Moonee and her young friends are being taught to lie, steal and disrespect authority figures, but the worst part is they don’t fully realize it’s wrong. They receive no consequences for their actions, even when their reckless playing leads to an act of arson.

Bobby is the movie’s only semblance of a moral compass. Sadly, he ultimately ends up helpless to stop the atrocities occurring at his motel. The overriding theme is to look out for oneself, no matter what the cost. There are moments of joy to be found when Moonie is able to overcome these hard circumstances and enjoy being a child anyway, but THE FLORIDA PROJECT isn’t a movie for children. The subject matter is gritty, dark and intense, with excessively immoral themes reserved only for adults.