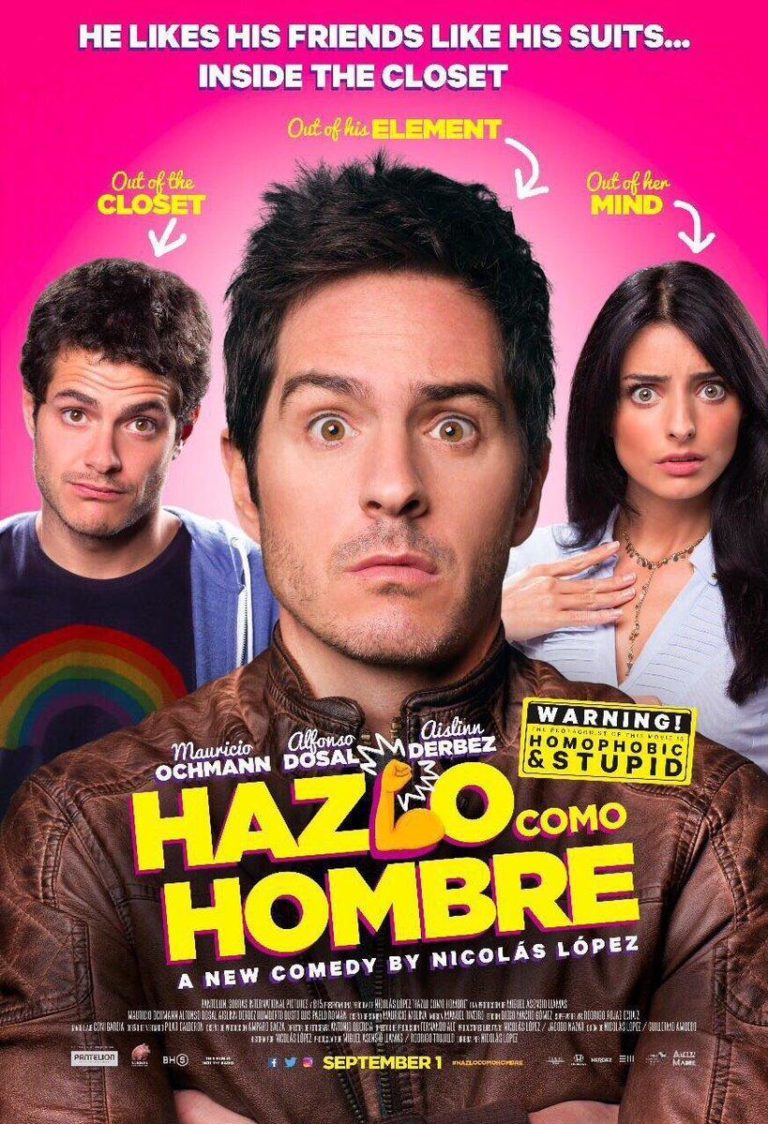 HAZLO COMO HOMRE is an obscene Mexican comedy about three childhood friends and their reaction to homosexuality. Santiago confesses to his friends, Raul and Eduardo, that he’s a homosexual and must break off his engagement to his bride-to-be. Eduardo accepts him as he is, but Raul goes to extreme measures to convince Santiago to get the homosexuality out of his system. He sends him prostitutes, self-help books, Christian books, and begins seeing a therapist about Santiago’s problem. Meanwhile, Santiago’s girlfriend is livid.

HAZLO COMO HOMBRE, which means DO IT LIKE A MAN, is made with high production values. However, the movie’s excessive crude content becomes monotonous, if not nauseating, to watch. The movie has a strong Romantic, politically correct worldview. It’s designed to promote a homosexual agenda that attacks and mocks those who object to the normalization of homosexual behavior, including Christians. For example, the anti-homosexual friend also turns out to be cheating on his pregnant wife. Even worse, the filmmakers fill their movie with lots of obscene, lewd gestures, dialogue and references. HAZLO COMO HOMBRE is totally abhorrent, unfit for human consumption.

(RoRoRo, PCPCPC, HoHoHo AbAbAb, FeFe, C, B, FRFR, LLL, V, SSS, NNN, AAA, D, MMM) Very strong Romantic, politically correct leftist/liberal worldview strongly supporting homosexual perversion and attacking those who object to the normalization of homosexual behavior, with some Christian, moral elements (including forgiveness) but distorted by the dominant worldview in an antinomian way; at least 28 obscenities (including several “f” words) and explicit sexual gestures and discussions about homosexuality in great detail, plus vomiting and toilet humor; light violence includes fiancée yells and throws things when she finds out her soon to be husband thinks he’s homosexual, man throws things around during therapy, man pushes another man at a party to prove his masculinity; very strong sexual content and references includes very strong homosexual references, crude references to various kinds of perversion, man shows his friend all the girls on Tinder he’s bedding behind his wife’s back, depicted homosexual acts, two men kiss at dinner table, two men make out with each other at a party, men dance on one another sexually at a rave, man sends prostitutes to his friend’s house to make him return to heterosexual behavior, woman uses disturbing sex toys to excite her fiancée; graphic image of a sex toy; heavy alcohol use and drunkenness, man takes over fifteen shots within two hours and drinks straight tequila at a party, man throws up at a party due to excessive drinking, fiancée gets drunk alone after intended groom dumps her for a man, guy friends constantly seen at bars drinking beers and taking shots when they want to discuss something personal, women and men drink socially at parties; no smoking or illegal drug use, but after woman gets dumped she goes on prescribed medication to numb her pain; and, heavy miscellaneous immorality including lying, revenge, greed, racism, adultery, bad role models, insults, and dysfunctional family portrayals.

Three childhood friends, Raul, Santiago and Eduardo, do everything together. They play video games on the weekends, have dinner parties, are on the same soccer team, and tell each other everything over drinks after games. Santiago is getting ready to marry Raul’s sister, Nati, but is having cold feet.

Meanwhile, Nati confesses to her best friend, Luciana, that her fiancé doesn’t want to engage in sex with her. Luciana gives her a few tricks to try, but none of them work.

Santiago is beginning to feel this wedding isn’t a good idea. His best friend, Raul, encourages him to sleep with other women. Raul confesses he’s been cheating on his pregnant wife for years but claims it keeps them both “happy.” He is satisfied and so is she because she doesn’t have to deal with his built up sexual aggression. Of course, the key is to never let his wife know, Raul says. However, Santiago doesn’t think this is the solution to his problem.

Later that evening, Santiago goes home to see his secret homosexual lover. He realizes he must tell his fiancée about this. So, he finally confides in his friends one night over drinks. Raul thinks his friend is joking. Eduardo, a metrosexual, feminine dresser, thinks there’s no problem being homosexual. Santiago assures Raul this isn’t a joke, but Raul refuses to believe him.

So, Raul goes to great measures to “get the gay out” of Santiago. He sends him prostitutes, self-help books, Christian books, and even begins seeing a therapist about his friend’s problem. A few days later, Santiago tells his fiancée they must break off their wedding because he’s homosexual. Like her brother, Raul, Nati refuses to believe it. She is livid and angry that she’s been dating this man for five years only to find out he is not straight. She goes into hysterics, kicking, screaming and crying. She begins drinking heavily, then decides to chop off her hair and dye it blonde.

After she chews Santiago out and doesn’t speak to him for a few days, she comes up with a new plan. She will be the gay lover he needs and then everything will be okay. In a very disturbing scene, she arrives to his house with a fake male genital attached to her pants that she hopes will satisfy him. Santiago is disturbed and shocked. He sends her away, and Nati is heartbroken.

[SPOILERS FOLLOW] Back in Raul’s life, his pregnant wife sees a message on his phone and discovers he’s been cheating on her. She packs up her things and leaves. Raul, who worked so hard to turn his homosexual friend straight and focus on hiding his adulterous acts from his wife, has been caught. Raul ends up alone without his best friend or wife. He wallows through life crying, drinking and going to therapy.

Eventually, however, Raul realizes he was in the wrong all along. He loved his wife and treated her poorly. His best friend is homosexual, but he decides it’s not his place to judge. Santiago and Raul connect while playing video games through a headset. They have a nice laugh over the fact Nati has ended up with Eduardo, the man with the feminine mannerisms. Raul apologizes for being a monster. Santiago forgives him, reminding him monsters don’t want to be bad, they just are. He says even monsters can have good intentions and that’s what makes them okay, just like Raul.

Thus, in the end, the three friends all forgive each other and reunite. Nati is in a new happy relationship with the third friend. Luciana has moved out and has her own place. She has had their son who is now two and splits time between his parents. In an unexpected twist at the end, a scene shows that Raul’s son likes Barbie dolls!

HAZLO COMO HOMBRE, which means DO IT LIKE A MAN, is made with high production values. However, excessive obscenities and sexual gestures and references eventually become monotonous, if not nauseating, to watch. The movie has a strong Romantic, politically correct worldview. It’s designed to promote a homosexual agenda that attacks those who object to the normalization of homosexual behavior, including Christians. Even worse, the filmmakers fill their movie with lots of obscene, lewd gestures and references. HAZLO COMO HOMBRE is totally abhorrent, unfit for human consumption.