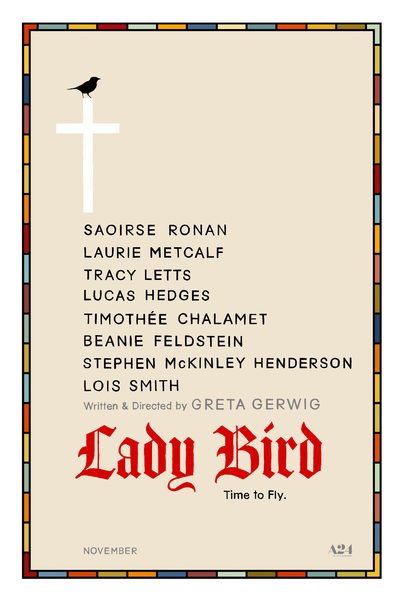 LADY BIRD is a witty drama about a teenage girl passing major milestones in her life such as graduating from high school, applying for college, falling in love, and losing her virginity. Christine, who has renamed herself Lady Bird, struggles to please her mother and join the cool girls at school. She’s trying to find her place in the world. Lady Bird wants to grow up, but it is only when she leaves home for college does she see the place she longs to flee is perfect. There is no place like home.

LADY BIRD is set and shot in Sacramento, Californian. There are beautiful visuals of the city during the changing seasons, but the movie is character driven, and each scene is focused on the people first. The acting is realistic and authentic. LADY BIRD has a surprisingly positive depiction of a Catholic school, but the rebellious teenagers have raging hormones, drink and even get drunk. So, the movie’s worldview is mixed at best. Ultimately, despite a positive ending, LADY BIRD has too many abhorrent elements involving teenagers to be acceptable entertainment.

(PaPaPa, CC, B, RoRo, FRFR, Ab, HoHo, LLL, V, SS, NNN, AAA, S, D, MM) Very strong mixed, unacceptable pagan worldview where a teenage girl attends a Catholic high school, sins and strays from her family but realizes her wrongdoings and returns to them with love with an overt Christian setting at the Catholic school that depicts the authority figures there in a positive light that also shows the students praying and receiving communion, but the teenagers are rebellious, protagonist calls one nun an obscene name and plays joke on her, and mother encourages daughter to use condoms, plus female protagonist sees her boyfriend kissing another boy; 29 obscenities (about 14 “f” words), three strong profanities (one GD and two referencing Jesus), five light profanities, drunk girl vomits; girl jumps out of a running car when getting into argument with her mom and later shows up in a cast; strong and light sexual content includes briefly depicted fornication between teenager protagonist and boy (boy has shirt off), teenagers kiss, two boys seen kissing, girl discusses condoms with her mother who encourages her to use them, teenage boy confesses of losing count of how many girls he has violated, teenagers discuss touching female breasts, teenagers sometimes talk about sex, and implied masturbation; girl buys a Playgirl magazine and full frontal male nudity in the photos is shown, upper male nudity, images of teenage girl in bikini and another girl in her underwear; heavy underage drinking, teenagers drink at parties and get drunk, girl gets alcohol poisoning from excess drinking and is rushed to the hospital; smoking and teenage girl smokes marijuana with her brother’s girlfriend; and, moderate miscellaneous immorality includes lying, teenage rebellion, stealing, revenge, greed, and dysfunctional family portrayals.

LADY BIRD is a witty coming-of-age drama about a high school senior, Christine, who has renamed herself Lady Bird in an effort to separate herself from her family and gain her own identity.

Lady Bird is a senior at a conservative, Catholic high school her mother depleted her funds to get her into because the public schools had “boys who knifed other boys.” Lady Bird wants to please her mother, but she never feels good enough for her high standards. Her mother wants her to attend a community college, live at home, be more helpful around the house, and dress more lady-like. Lady Bird, who has pink faded dye in her hair, wants to break free and be her own person, but the desire to please those around her and fit in always creeps back into the picture.

Lady Bird longs to live in New York where people dress the way they want, don’t live in cookie cutter homes or live to impress the upper class in society. Her mother disapproves of her going to New York and reminds her she would never make it into a school out there with her poor grades. Lady Bird, fiercely determined to prove her mother wrong and get far away from Sacramento, applies to a handful of colleges in New York. She asks her Dad to fill out the financial aid section and makes him promise not to tell Mom because it will cause another fight. Lady Bird’s father is jobless and battles with depression but is a sweet, sincere man who longs to see his daughter happy. He agrees to fill out the forms for her.

Back at school, Lady Bird auditions for the school play. She doesn’t get the lead, which discourages her, so she feels like a failure all over again, but things turn around when she falls for Danny, the cute, charismatic leading boy in the play. The two begin to date and Lady Bird is filled with joy. When she finds out he is from a super wealthy family she daydreams of marrying him and living in his grandmother’s exuberant blue house in the fancy part of town, which of course she would pass down to them. Life is looking up for her until she walks in on her boyfriend making out with another boy. He is gay! Lady Bird is heartbroken.

Desperate to fit and with no desire to be in plays anymore she sucks up to the popular girl in school who cuts class to hang with some desirable guys in a band. The cool girl befriends her and introduces her to one of the boys in the band. Lady Bird smokes her first rolled cigarette and loses her virginity to him, which is a painful experience when she realizes she lost her virginity to a boy who didn’t care about her. She’s so over life’s disappointments. She ditches her band boyfriend to go to prom with her best friend later that week and has a blast being with her bestie.

Months pass and acceptance letters arrive for college. Lady Bird finds out she’s been accepted into her desired school in New York. When her mother finds out, she is furious about being kept in the dark by Lady Bird and her father. She refuses to speak to Lady Bird, even when she and her father drive her to the airport. Her father sends Lady Bird a letter he salvaged from the trash from her mother. Her mom wanted to give it to her but thought Lady Bird would judge her poor handwriting and spelling mistakes. When she’s at college, Lady Bird reads the letter realizing how much her mother loves her and has always done the best she can as a parent. It’s not until Lady Bird is in college that she realizes she loves Sacramento and has a new appreciation for her hometown, proving there is no place like home.

LADY BIRD is a charming, witty, emotional movie, with a surprisingly positive depiction of a Catholic school. The performances are particularly good. Saoirse Ronan as Lady Bird and Laurie Metcalf, who plays the mother, give rich, raw performances depicting the ups and downs of mother-daughter relationships. However, Lady Bird and the other teenagers are rebellious, so there’s heavy cursing, sexual scenes and teenage substance abuse. The authority figures at the Catholic school are depicted in a positive light, but Lady Bird gets mad at one nun and calls her an obscene name. She also gives an annoying pro-abortion response to a woman speaker presenting the pro-life position. So, the movie’s worldview is mixed at best. Ultimately, despite a somewhat positive ending, LADY BIRD has too many abhorrent elements to be acceptable entertainment.