ALL THE MONEY IN THE WORLD

"The Love of Money Rots the Soul" 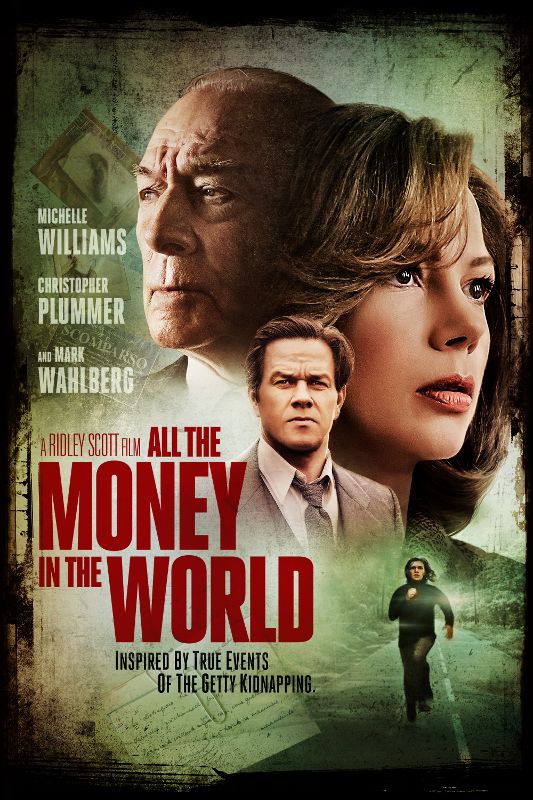 ALL THE MONEY IN THE WORLD is a crime drama about the 1973 kidnapping of John Paul Getty III, the grandson of the richest man in the world, J. Paul Getty. The story is shown from the perspective of Gail Harris, the former daughter-in-law of the oil tycoon J. Paul Getty. She begs Getty to pay the $17 million ransom the Italian kidnappers have demanded for her son’s life. Getty is frugal to the extreme, however, and refuses to pay anything for his grandson’s life. Will Gail be able to save her son?

Dominant Worldview and Other Worldview Content/Elements:
Strong mixed pagan worldview where extremely wealthy character acts as his own god, a couple references to Islam, combined with moral elements of a mother trying to save her son at all costs, and greed and the love of money are shown as dangerous sins that rot families, plus a character says “Thank God” and light capitalist elements as a wealthy businessman is able to donate his wealth to art preservation and charity.
Foul Language:
19 obscenities (half of which are “f” words) and two profanities.
Violence:
Some very strong and graphic violence with blood splatter includes a shootout results in several dead criminals, kidnappers cut off a teenager’s ear in graphic detail, a charred body is seen.
Sex:
No sexual content, but some prostitutes talk to a teenage boy.
Nudity:
Upper female nudity and upper male nudity.
Alcohol Use:
Moderate drinking, with implied alcoholism.
Smoking and/or Drug Use and Abuse:
Heavy drug use, implied heroin drug use.
Miscellaneous Immorality:
Strong miscellaneous immorality includes greed, dysfunctional family and kidnapping.

ALL THE MONEY IN THE WORLD is a crime drama about the 1973 kidnapping of John Paul Getty III, who goes by Paul and was the grandson of the richest man in the world, J. Paul Getty (played by Christopher Plummer).

The story is seen from the perspective of Gail, Paul’s mother. The Getty fortune was created through Getty’s venture into oil drilling, first in Oklahoma and eventually in Saudi Arabia. His obsession with his business left little room for family, so he never got to know his children very well.

Years later, Gail’s husband, John Paul Getty II, becomes desperate for a job. So, he asks his estranged father, whom he hardly knows, for a job. Surprisingly, the oil tycoon has a job for his son, and he brings his entire family to Rome, Italy.

Suddenly, J. Getty takes an interest in his son, and his grandchildren, particularly Paul. However, the newly gained wealth has negative effects on the family. Gail’s husband uses his new job as a means to travel and abuse alcohol and drugs. Gail is fed up and decides to divorce her husband and take the children with her. Getty Sr. and his team of lawyers negotiate with Gail, but she reveals she doesn’t want any money from the family fortune. All she wants is sole custody of the children. The ridiculously frugal Getty doesn’t understand what Gail gets out of this, but he agrees since it’s a good financial deal for him.

Years later in Rome, Paul is kidnapped by Italian criminals and held for a ransom of $17 million. Gail has no money, so she must ask her former father-in-law to dip into his fortune to pay the ransom. The only problem is that Getty tells the press he won’t pay anything for his grandson’s life. He rationalizes that, if he pays the ransom, it will put his other children and grandchildren in danger. Despite this, he orders his security adviser Fletcher Chase (Mark Wahlberg), a former CIA operative, help Gail work with the police in tracking down Paul, so that Getty doesn’t have to pay any money. As time passes, the situation becomes more and more serious, and Getty continues to negotiate a price for his grandson’s life.

The behind-the-scenes drama of ALL THE MONEY IN THE WORLD is almost more interesting than the movie itself. Kevin Spacey was cast as the J. Paul Getty and the movie had been finished, but after sexual assault allegations came against Spacey, Director Ridley Scott decided to recast Getty with Christopher Plummer and reshoot all his scenes one month before the movie’s scheduled release. This sudden reshoot is almost entirely unnoticeable thanks to Plummer’s terrific performance, with the exception of one shot which clearly required some green screen. Wahlberg is the most enjoyable to watch, while Michelle Williams as Gail gives a nuanced and subdued touch. Finally, the ending is exciting and satisfying, but it just takes too long to get there and requires slogging through some downright boring family drama.

Surprisingly, ALL THE MONEY IN THE WORLD isn’t the anti-capitalistic movie it could have been. Getty is undeniably cold and ruthless, negotiating his grandson’s ransom and quibbling over money he can easily give up. The love of money and affluence rots families, as it does with the Gettys. However, in the end, it’s revealed that Getty had amassed $2.8 billion dollars in art and antiquities to give to the public. It’s unclear whether Getty was trying to protect his children from the dangerous levels of wealth he had amassed, or if he truly was uninterested in them. Regardless, his putting of business above family is truly tragic. Ultimately, both his son and grandson suffered from severe drug addiction due to the billionaire’s failure as a father.

ALL THE MONEY IN THE WORLD has some graphic violence and strong foul language. In the end, it’s one of those movies that sounds more interesting than it actually is. MOVIEGUIDE® advises extreme caution.

Watch ALL THE MONEY IN THE WORLD: