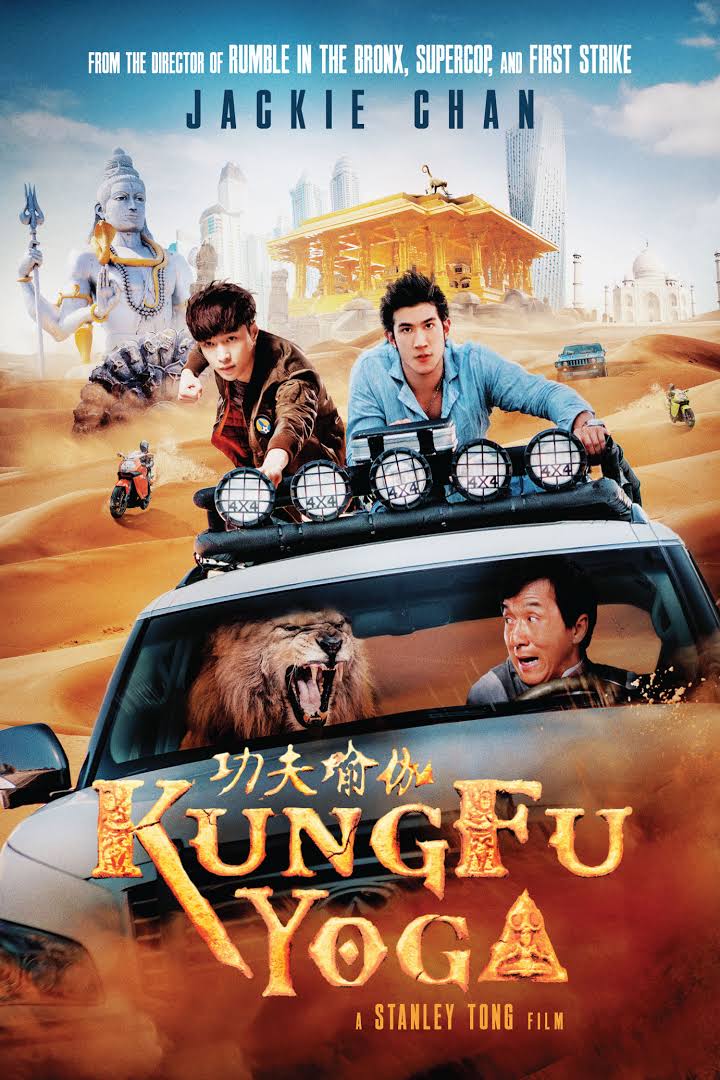 KUNG FU YOGA is an action adventure movie from China and India featuring the multiple skills of Jackie Chan as Professor Jack, scholar of archaeology. Jack receives a personal request from a young, beautiful Indian professor, Dr. Ashmita, to help find an ancient lost Indian treasure. The unlikely duo and their assistants race around the world in search of clues and meet up with mercenaries who want the treasure as well. The pursuit for the treasure takes the treasure seekers to an underground Buddhist temple filled with gold.

KUNG FU YOGA has a very strong false Buddhist, pagan worldview with some moral elements. The movie starts with a battle scene that depicts blood. In the live action, there are several martial arts fight scenes, chase scenes, people trapped in a cage surrounded by hyenas, and people in peril of freezing to death. The movie relies heavily on stereotypes, both Asian and Indian. The movie’s more successful scenes focus on Jackie Chan and his charisma and talent. KUNG FU YOGA has an abhorrent worldview with some idol worship and lots of action violence.

(PaPaPa, FRFRFR, B, L, VV, M) Very strong Buddhist pagan worldview with lots of false religion and references to Shiva, the Hindu god, mixed with some light moral elements; three obscenities, two profanities and lion vomits; and, a moral worldview with a strong Buddhist perspective; two profanities, three obscenities, lion vomits; lots of strong action violence includes opening CGI battle scene depicts some blood, several marital arts fight scenes, one guy set on fire, one bad guy dies, and gun fire; no sexual content; no explicit nudity but woman wears bikini in one scene and midriff exposed in one scene; no alcohol; no smoking or drugs; and, blackmail, stealing, kidnapping, leaving people in peril of freezing to death, trapping people in a cage surrounded by hyenas, homage to an idol, and Jackie Chan playfully spanks a dancer at the end of a Bollywood dance.

KUNG FU YOGA features Jackie Chan as Professor Jack, an archaeologist, who receives a request from a young, beautiful Indian professor, Dr. Ashmita, to launch a treasure hunt for an ancient lost Indian treasure. Besides being knowledgeable in archaeology, Professor Jack displays his expert skills in Kung Fu while Dr. Ashmita shows her expert skills in yoga. The unlikely duo quickly discovers the first clue, which leads to a glacier.

Using high-level technology, they drill beneath the glacier and find another critical clue, but they’re waylaid by mercenaries who also seek the treasure. Dr. Ashmita saves Professor Jack from their glacial tomb by using an advanced yoga technique while swimming through the near freezing waters to escape.

The pursuit finally takes the treasure seekers and mercenaries to an underground Buddhist temple filled with gold. The foes continue to battle until the temple worshippers put an end to the fighting. Everyone bows to an idol of Buddha and joins a Bollywood dance for the finale.

KUNG FU YOGA features the acting talents of Jackie Chan and one lion during a chase scene. The dialogue includes too many explanations. Also, many of the characters are based on crude stereotypes. As often is the case in a Jackie Chan movie, the action violence for the most part is a more comic style of Kung Fu, with sporadic spurts of gun fire and chase scenes. Several foul words are said in Chinese, but clearly displayed in the subtitles. The movie’s popular quote is “He who possesses the eye of Shiva possesses the whole world.”

Due to violence, foul language and idol worship, extreme caution is recommended for children.