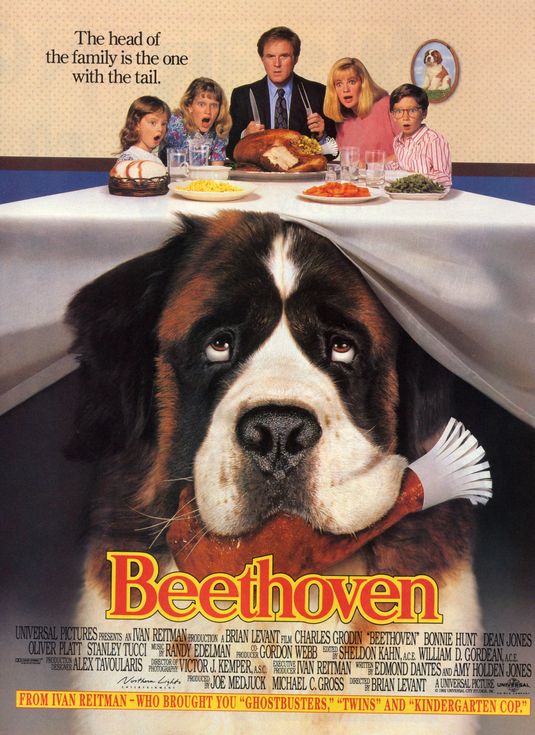 In BEETHOVEN’S 2ND brings new meaning to the expression “puppy love” for holiday moviegoers of all ages. BEETHOVEN’S 2ND finds the gentle, good-natured St. Bernard star smitten by a demure, feminine lady-love. While George Newton (Charles Grodin) and his wife, Alice (Bonnie Hunt), struggle with typical financial pressures, their children face their own challenges. Budding fifteen-year-old, Ryce, faces peer pressure and younger siblings, Ted and Emily, strive to be noticed and heard. The three are accomplices to Beethoven’s big surprise. Moonlight and a warm snuggle mean the rediscovery of the meaning of chaos--times four--Tchaikovsky, Chubby, Dolly, and Mo, a quartet of irresistible offspring. Trouble is in the person of Missy’s evil owner Regina who heartlessly severs Beethoven and Missy and plots to steal the puppies. To the delight of the audience, a child’s bedtime prayer is answered, and Regina is led to her just desserts by Beethoven and family.

The acting is excellent, but of highest merit is BEETHOVEN’S 2ND’s beautiful theme, “The Day I Fall in Love,” as sung by James Ingram and Dolly Parton. Of course, Beethoven and his family stole the hearts of the audience as lovers often do. More doesn’t always mean better, but in this case it does. BEETHOVEN’S 2ND is more fun, more adventure, more excitement – the highlight of the season!

(BB, C, L, S, M) Family values and challenges, love and right choices: a no-sex, no drugs, no drinking message for teens although a boyfriend tries to corner the girl and is thwarted by Beethoven; brief lying for the protection of the animals gives way to immediate honest replies when confronted by parent; children show responsibility, good judgment and logic; the Newtons are a “functional” caring family; one obscenity, “We’ve been through Hell,” and some questionable song lyrics; and, a brief discussion of “Where do babies come from?”--nothing graphic/not totally explored.

He’s back! While mice dance through dreams in THE NUTCRACKER and reindeer fly through the sky with Santa to rescue Christmas from the Pumpkin King’s NIGHTMARE BEFORE CHRISTMAS, America’s favorite St. Bernard appears on screen bringing new meaning to the expression “puppy love” for holiday moviegoers of all ages. It is the highlight of the season – a true, four-star entertainment delight!

The original BEETHOVEN, released in April of 1992, experienced phenomenal success: $143 million worldwide grosses and more than 3.5 million in videocassettes sold in the U.S. alone. BEETHOVEN’S 2ND, the sequel, finds the gentle, polite, loving, good-natured St. Bernard star smitten by a demure, smooth, feminine (pink bows and all) lady-love, the fetching perfect complement at his side. They are the anchors for this feel-good comedy romance. “Adorable” is the operative word.

While George Newton (Charles Grodin) and his wife, Alice (Bonnie Hunt), struggle with keeping a roof over the family, typical financial pressures and balancing business with family time, their children face their own challenges. Budding fifteen-year-old, Ryce (Nicholle Tom), faces peer pressure and character choices (a crush on a fast-moving, great-looking, rich boy who hangs on the wild side at off-limits parties). Younger siblings, Ted (Christopher Castile, 13) and Emily (Sara Rose Karr, 9), strive to be noticed and heard. The three jointly conceal and are accomplices to Beethoven’s big surprise. Meanwhile, love is in the air…grown-up love that endures hardship but lasts forever, family love that grows stronger, deeper and more understanding, young love that searches for the answers about what kind of love stands the test of time, and the love that brings out the “warm fuzzies” in us all…puppy love: the kind they generously give and happily accept.

Beethoven and Missy’s romantic awakening begins with ice cream cones shared in the park, a sight-seeing stroll through the aromatic interests on main street, a shared stolen treat from the hot-dog vendor, and couples, couples everywhere. Moonlight and a drive-in movie, a kiss/lick or two, and a warm snuggle mean the end of George Newton’s peace and quiet and the rediscovery of the meaning of chaos–times four–Tchaikovsky, Chubby, Dolly, and Mo, a quartet of irresistible offspring who inherit their father’s talent for getting into trouble and follow his paw prints as adorable heart stealers.

The trouble begins with a divorce and the custody battle over Missy. Trouble is in the person of Missy’s evil owner Regina who heartlessly severs Beethoven and Missy and plots to steal the puppies out of selfishness and greed. This character is masterfully played by Debbie Mazar whose portrayal is reminiscent of the villainous “Queen of Mean,” Cruella de Ville from 101 DALMATIANS. To the delight of the audience, a child’s bedtime prayer is answered, and Regina and her uncouth partner in crime, Floyd (Chris Penn), are led to their humorous, just desserts by none other than Beethoven and family.

Actress Debbie Mazar admitted the role was difficult for her because she is a great animal lover. After each scene was over, says Mazar, “I’d go over to them (dogs/puppies), hug them and say I’m sorry.” Over 100 puppies played the four leads at several ages. According to producer Michael Gross, Beethoven and his canine co-stars were provided every amenity a dog could want: the stage areas were kept in the low 60’s to accommodate the dogs’ heavy coats and to keep them from panting; they flew first class between locations in specially constructed crates; and, “the dog biscuit ratio also went up since the last film,” adds Gross.

The introduction of Ashley Hamilton (son of actor George Hamilton) to the screen as Taylor, Ryce Newton’s too-good-to-be-true heart-throb, is sure to thrust him into an instant “poster boy” hit for teens. Newcomer Danny Masterson (Seth), another of Ryce’s suitors–less glamorous, but more principled–has a great ease, quick smile and understated presence which ensure a bright career.

Of highest merit is BEETHOVEN’S 2ND’s beautiful theme, “The Day I Fall in Love,” as sung by James Ingram and Dolly Parton. The song is woven throughout the film, and the harmony achieved by this powerful duo leaves you humming its melody and stirred by its words long after leaving the theater. . . a sure Academy Award nomination for Best Song from a Motion Picture, 1993.

Across the audience “oohs and aahs” could be heard during the breath-taking scenes of the Newton’s vacation getaway to Montana’s majestic Glacier National Park. The cozy Apgar Village at the edge of Lake McDonald’s green water and the rugged Continental Divide provided a backdrop of scenic purity becoming a love story such as this. Beethoven and his family stole the hearts of the audience as lovers often do.

More doesn’t always mean better, but in this case it does. BEETHOVEN’S 2ND is more fun, more adventure, more excitement, and more at stake.