"Stay True to Yourself or Not?" 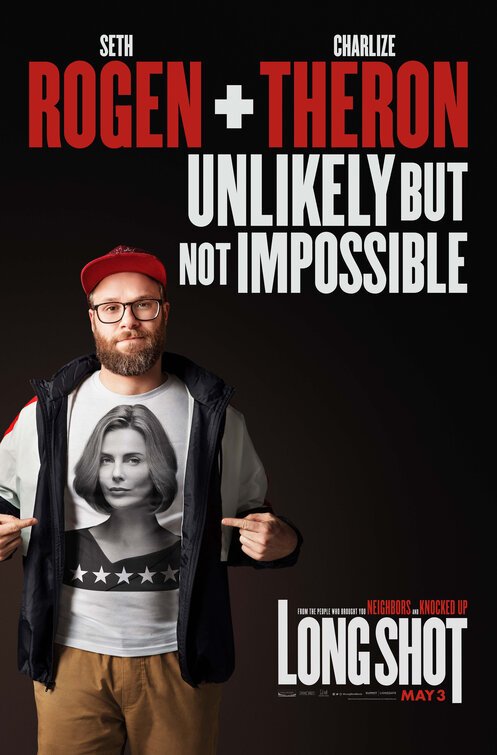 LONG SHOT is a story that asks the question, what are you willing to lose to keep true to yourself? Fred, a nerdy journalist, wrestles with the pressures of being authentic to how he views the world in his writing and how people want him to write. Charlotte, the Secretary of State, wrestles with the pressures of party loyalty while trying to establish her platform for a presidential run. Charlotte used to babysit Fred’s younger siblings when he was 13. Charlotte decides to hire him as a speech writer, and their new relationship brings them together.

As a romantic comedy, LONG SHOT’s name is appropriate. The title plays on the seeming disparity in attractiveness between Fred and Charlotte in both physical and social traits. This is also part of the movie’s charm. That said, the movie’s burdened by abundant foul language. It also accepts sexual relations apart from marriage as normal. Also, there are many instances of drug use with no real consequences. Lastly, the movie’s use of race and its caricatures is offensive. LONG SHOT isn’t suitable material for media-wise viewers.

(RoRo, EE, C, AbAb, LLL, V, SS, N, AA, DDD, M):
Dominant Worldview and Other Worldview Content/Elements:
Strong Romantic worldview, strong environmentalist elements with belief in man-made environmental degradation and working to gather multinational support for an environmental initiative to curb the impact of human activity on the environment, light Christian elements where a side character has a cross necklace and there’s conversation about belief in God, and a white supremacist rally espouses Anti-Jewish attitudes and language, plus swastika imagery via tattoos
Foul Language:
At least 90 obscenities and several strong profanities, plus crude innuendoes
Violence:
Minor depiction of violence involved in a terrorist attack, minor explosions, and some slapstick comedy violence involving pratfalls and the like
Sex:
Strong sexual content includes multiple scenes where two characters hook up
Nudity:
Upper male nudity on multiple occasions
Alcohol Use:
White supremacist meeting occurs where alcohol is strewn about the apartment and multiple people partake, an occasion where one character encourages another to drink to intoxication to forget, multiple parties and events where alcohol is served, and a rave scene where the characters are shown taking shots
Smoking and/or Drug Use and Abuse:
No smoking but one scene where characters dialogue about mixing drugs with alcohol, a scene where a main character smokes marijuana, and a scene where two characters take Ecstasy; and,
Miscellaneous Immorality:
Major instances of blackmail on a national scale.

How much of yourself are you willing to lose to capture success in your career? That’s the biggest question asked by the new romantic comedy, LONG SHOT, which contains a lot of crude comedy and foul language to go with its theme of trying to find a lasting love connection between two totally different people.

LONG SHOT is set in the political world of Washington. Fred is a struggling journalist who loses his job due to a merger. Depressed, he reaches out to his childhood friend, Lance, for comfort. Trying to console Fred, Lance takes him to see Boys II Men in an attempt to party his woes away. While at the event, Fred runs into Charlotte, the current Secretary of State, who used to babysit Fred’s younger siblings when Fred was 13.

This chance encounter leads to an opportunity for Fred to become a speech writer for the Secretary. As Fred becomes part of Charlotte’s team flying from country to country, he seeks to get to know Charlotte better so he can write better speeches for her. Charlotte and Fred bond over their personal connection, which also goes back to high school. Fred uses that as a basis for Charlotte’s speeches. She’s the idealistic girl who cares about the environment.

Charlotte is trying to put together a multinational agreement on the environment to use as a platform for her presidential run. However, in order to garner her party’s nomination, she needs the President’s endorsement. The final conflict is set up when the President becomes angry with Charlotte’s initiative because it angers some major donors. Faced with the realities of compromise that are so prevalent in the political world, Charlotte wrestles with how to stay true to both whom she was and is and wants to be. Meanwhile, Fred must decide how, where and if he fits into Charlotte’s life.

LONG SHOT explores many themes, none bigger than staying true to your personal beliefs. It asks the question, what drives you? It is also a lighthearted exploration in the opposites of attraction.

Artistically executed, the movie offers high entertainment value from a production standpoint. The movie is well acted and has a story that’s an interesting version of the underdog story.

However, the movie falters in its heavy use of foul language and the frequent crude behavior of the characters. For example, the movie opens at a white supremacist meeting wherein there’s a lot of swearing and disparaging of certain people groups. While the movie ultimately presents this as the extreme view of some people, it is very explicit in how it treats it. Just because something may be a true depiction, doesn’t mean one must submit oneself to the evil/sinful belief.

Another example of how the movie places characters in morally challenging, compromised situations is a sequence involving a drug rave party. At a low moment, Charlotte comes to Fred seeking to escape from her problems through illegal drug use. Charlotte, who’s usually overly calculated in all her decisions, makes a decision to let go of her inhibitions. The party sequence celebrates the use of drugs recreationally as a way to become free, free from responsibility and free from oneself. In the script, there’s a potential for disastrous consequence that often accompanies such choices. Ultimately, however, no real consequences are felt by the characters.

Lastly, movie also accepts sexual relations apart from marriage as normal and natural. In all of the scenes where sexual relations are depicted or references, none takes place within the bounds of marriage. In one relationship the connection is mostly merely physical. With Fred and Charlotte, their intimate relationship has a more relational, emotional context. Regardless, however, sexual activity outside of heterosexual marriage is immoral.

LONG SHOT tells a love story in a complicated world. As such, it’s decidedly Post-Christian in tone, at least in the explicit motivations for each character’s moral compass, except for one person. Fred’s childhood friend, Lance, wears a cross the entire movie and at one point claims to believe in God. However, the extent to which his belief influences or guides his decisions is suspect given his proclivity for drinking and using foul language. Lance’s character raises the question, what does a person who believes in God look like? How is a person who wears the cross as a symbol of faith supposed to act? These are deep questions to ask, yet they are raised by this romantic comedy only peripherally and implicitly.

In the end, LONG SHOT delivers humor that’s crass, foul and irreverent. Despite a search for authenticity and connection by the main characters, LONG SHOT fails to inspire much of anything positive for media-wise moviegoers.