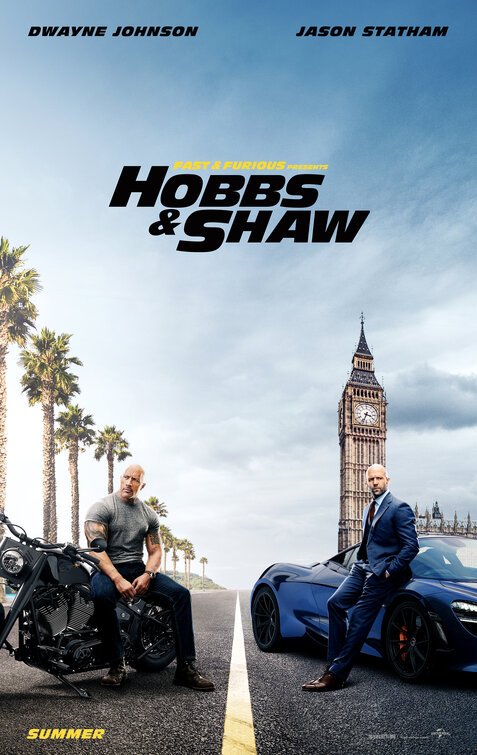 FAST & FURIOUS PRESENTS: HOBBS & SHAW stars Dwayne Johnson and Jason Statham as the title characters. The CIA wants Hobbs and Shaw to retrieve an advanced DNA virus that’s been stolen by Shaw’s estranged sister, Hattie, a British government agent. However, Hattie’s been framed by an evil organization that wants to use the virus for its own evil purposes. The stakes are raised when Shaw discovers Hattie has converted the virus into small capsules embedded under her skin. It will soon kill her and be released, killing billions.

Like other recent FAST & FURIOUS movies, HOBBS & SHAW is filled with constant action, but seems slow at times. It also has lots of humor, mostly involving the rivalry between the two title characters. HOBBS & SHAW has a pagan worldview praying to gods and ancestors. Even so, there are pro-family themes and references to God. The movie also takes a stand against the racist evolutionary worldview of the bad guys. That said, the movie is marred by excessive foul language, intense violence and disgusting sexual comments. So, HOBBS & SHAW is excessive.

(PaPa, FRFR, BB, C, ACap, Ev, LLL, VV, A, M):
Dominant Worldview and Other Worldview Content/Elements:
Pagan worldview including a positive prayer to Samoan gods and ancestors with some immoral pagan behavior, mitigated by one positive reference to God, one positive biblical reference, and a promotion of forgiveness, strong moral, pro-family elements and a promotion of forgiveness, plus the anti-capitalism and the belief in evolution of the bad guys is overtly rejected by the good guys;
Foul Language:
At least 32 obscenities (including one “f” word), four GDs, two Jesus profanities during an end credits scene with Ryan Reynolds being the offender, five light profanities, and an obscene gesture;
Violence:
Lots of intense violence includes lots of intense action violence, lots of hand-to-hand combat, slow motion punches to the face, good guys hit bad guys many times with objects like pots and motorcycle helmets, man fights woman who tries to get away from him, but she fails, fighters wear body armor, bad guys shoot minions of good guys, explosions, chase scenes, bad guy performs eye-popping stunts with motorcycle, some kicks to the groin, two men in truck chain their truck to a villain’s helicopter trying to fly away because the villain has kidnapped one of the men’s sister, people driving other trucks latch onto the one truck to help keep the copter from flying away successfully, vehicles crash, a couple vehicles fly through large plate glass windows, villain shocks two tied-up good guys five times to force them to convert or do what he wants, people dangle from great heights, good guys use clubs on bad guys and vice versa, people descend from the side of a tall glass building, some gunfights, bad guy threatens scientist with flame thrower, bad guys burned by flame thrower, violent threats, the evil plan by the villains involves a form of genocide, etc.;
Sex:
No sex scenes, but good guy shares a passionate kiss with a woman who provides him and his team with special equipment;
Nudity:
Brief upper male nudity;
Alcohol Use:
Some alcohol use;
Smoking and/or Drug Use and Abuse:
No smoking or drugs; and,
Miscellaneous Immorality:
Kidnapping, title characters trade insults and trash talk with one another, evil organization wants to rule the world, hero is estranged from his brother but they reconcile, hero complains that his criminal father got his family involved with father’s criminal activities so he had to turn his father into the authorities when it became obvious his father didn’t really care about him or his siblings and their possible fate, and the dangers they consequently faced, stealing, and some pro-evolutionary statements by a bad guy, but they are directly and implicitly rebuked, so the movie itself doesn’t promote evolution.

FAST & FURIOUS PRESENTS: HOBBS & SHAW finds government agent Luke Hobbs and bad guy turned good guy Deckard Shaw reluctantly having to team up to save the world from a deadly DNA virus while simultaneously getting an anecdote to the virus to save the life of Shaw’s estranged sister, a British agent. HOBBS & SHAW is exciting and funny, with some positive, uplifting values, but it’s marred by excessive foul language, disgusting sexual references, intense violence, and the invocation of polytheistic gods.

The movie opens with Shaw’s estranged sister, Hattie, an MI6 commando, trying to retrieve a deadly virus with a team of other British commandoes. Hattie’s team is interrupted by some bad guys, led by a special ops soldier named Brixton, who’s been enhanced with technology by a nefarious organization called Eteon. Hattie manages to convert the virus into small capsules embedded under her skin and escapes, but Brixton frames her for the theft of the virus so that Hattie has nowhere to run.

The CIA sends Luke Hobbs in Los Angeles and Hattie’s brother, Derrick Shaw, to retrieve the virus from Hattie and stop Eteon, which is led by a mysterious boss who only appears as a disembodied voice communicating with Brixton. However, they only have two or three days to get the virus out of Hattie’s skin, or she will die and the virus will infect the whole world. Brixton’s boss wants to get the virus from Hattie so his scientists can key the DNA virus so that it kills only “weak” human beings. That would only leave Eteon’s enhanced race of supermen in charge of everything.

Like other recent FAST & FURIOUS movies, HOBBS & SHAW is filled with constant action. This time around, however, it adds lots of humor between Dwayne Johnson, who plays Hobbs, and Jason Statham, who plays Shaw. The movie’s conceit is that Hobbs and Shaw can’t stand one another, so the script contains constant insults and trash talk between the two characters, some of which is disgusting. HOBBS & SHAW isn’t quite as emotionally powerful as some of the other FAST & FURIOUS movies, but it has its share of touching moments.

Like other recent FAST & FURIOUS movies, HOBBS & SHAW extols family. Despite her criminal tendencies, Shaw’s mother loves her son and daughter and wants to see them reunited. Also, Shaw clearly cares for his sister, Hattie, and, when Hattie learns that Shaw was framed and isn’t really a traitor, she wants to reconcile with her brother. Meanwhile, Hobbs and his brothers clearly respect their mother. Eventually, Hobbs reconciles with his own brother. Also, the movie shows Hobbs is a caring father concerned about his daughter’s welfare.

HOBBS & SHAW has a pagan worldview. Even so, the movie promotes family, has a few positive references to God and at least one positive biblical reference. The movie also takes a stance against the racist evolutionary and anti-capitalist worldview of the bad guys. Surprisingly, the movie identifies the evolutionary views of Brixton and his mysterious boss with racism. In fact, Hobbs correctly identifies the genocidal intentions of their plan to create a race of supermen, which involves murdering all the “weak” human beings in the world by keying the DNA in the virus to their DNA. How this would be done exactly remains a big mystery.

That said, the movie’s positive worldview is marred by an excessive amount of foul language, including several strong profanities and one “f” word, as well as some extremely disgusting sexual references. Also, just before the final battle begins between the good guys and the bad guys, Hobbs gives a pep talk to his Samoan brothers. At one point during that inspiring speech, Hobbs prays to their “gods and ancestors.” This line spoils an earlier major piece of dialogue by his mother where she makes a slightly positive reference to God.

According to recent statistics, about 58 percent of the indigenous population on Samoa are actually Protestant and 19 percent are Roman Catholic. Also, although before Christianity arrived on Samoa, the indigenous society had descended into polytheism, the people there did believe in a supreme god, named Tagaloa, who created the heavens, the land, the sea, fresh water, fish, animals, plants, and humans. This belief clearly shows that, originally, in the distant past, after the One True God created Adam and Eve and their descendants, the first ancestors of the Samoan people probably had accepted a primitive form of ethical monotheism similar to what Adam and Eve knew. Sadly, most people don’t know about all the traces in human history and anthropology of the One True God’s relationship with Adam and Eve, and their direct descendants, starting with Seth and continuing to Noah and his immediate family, as described in the Book of Genesis. These traces can be found throughout the world in many, if not most, descriptions of “primitive” societies and their religious beliefs. These historical traces have been found by and discussed by several scholars, including a Catholic anthropologist named Father Wilhelm Schmidt, the Scottish anthropologist Andrew Lang, the British anthropologist Sir E. E. Evans-Pritchett, and anthropologist Ernest Brandewie, retired professor of Indiana University South Bend. Sadly, few people know about this crucial bit of information about the religious beliefs of ancient and primitive societies. As a result, most people think European Christians just imposed their faith on indigenous populations by force, without any prior knowledge whatsoever of the One True God by the indigenous people. However, if you are an indigenous person, it’s not hard to go from a belief in a Creator God named Tagaloa to a belief in the God of the Bible and His son, Jesus Christ, who died for our sins and rose from the dead in a specific time and place of real history.