"Emotionally Involving and Provocative but Flawed" 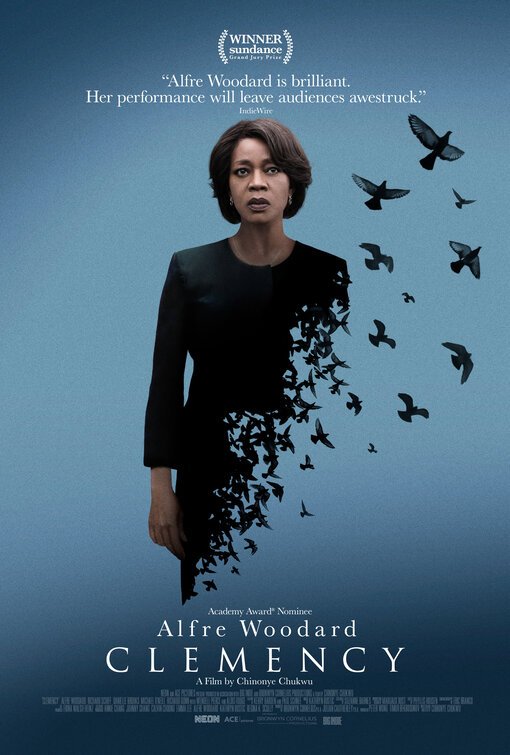 CLEMENCY is a character study that follows an African American prison warden, who’s in the midst of executing two prisoners. After the first execution is almost botched, Warden Williams is feeling the stress and guilt of having to preside over such situations. She’s apparently suffering PTSD and has withdrawn from life, including from her loving husband. Meanwhile, the second prisoner, who’s also African American, maintains he didn’t kill a policeman, but he keeps losing his appeals. His only hope is a ruling of clemency from the governor.

(B, CC, L, VV, S, AA, M):
Dominant Worldview and Other Worldview Content/Elements:
Light moral worldview where (ultimately) people seem overcome by the unbending rules of the prison system, with some overt positive Christian elements where prison minister reads Romans 8:38-39 to a prisoner about to be executed (but the minister leaves out the end of the passage that refers to “Christ Jesus,” minister is present during two executions, minister prays for a prisoner while he’s being executed and tries to help the prison’s female warden who’s troubled by the executions over which she must preside, a woman holds a necklace with a cross, a prisoner recites the Lord’s prayer, love and forgiveness are extolled, and a man talks about how his family is his hope, but ultimately the movie’s Christian, moral elements don’t solve the plot problem
Foul Language:
Four “f” words, one BS obscenity, one or two GDs, and one light profanity
Violence:
Brief strong, disturbing violence during a lethal injection execution where a man’s artery blows and some blood is seen, an inmate tries to take his own life in his cell by beating his head against the wall but is stopped by guards, and camera focuses on prison warden’s face as a possibly innocent man is executed
Sex:
Implied marital sex when movie cuts to a couple’s bedroom and husband appears to stick his hand down his wife’s top as they briefly dance while celebrating their anniversary, but they get into an argument when husband says he thinks they should both retire
Nudity:
No explicit nudity but one instance where you can see a woman’s bra
Alcohol Use:
Alcohol use and woman is drunk in bar parking lot when her co-worker takes her keys away
Smoking and/or Drug Use and Abuse:
No smoking or drugs; and,
Miscellaneous Immorality:
Dysfunctional marriage portrayed where wife seems to be suffering from PTSD because of her job as a prison warden at a prison where she has to preside over executions (she has become withdrawn and taken to drowning her angst with drink), but wife eventually makes an effort to fix things, though last scene makes viewers wonder if she will ever get over her PTSD about her job.

CLEMENCY is an emotionally involving and thought-provoking character study. The story follows a female African American prison warden, who’s in the middle of executing two prisoners on death row back-to-back. The stress and guilt from her job has taken an emotional toll on all aspects of her life, especially since the second prisoner, sentenced for killing a policeman, maintains his innocence. CLEMENCY is an intense, well-acted drama and has some positive Christian elements, but it only acknowledges the pain of one of the murder victims in one scene and contains two scenes of strong violence and six strong obscenities and profanities. MOVIEGUIDE® advises extreme caution.

In the opening scene, an African American prison warden, Bernadine Williams, is walking into work. They are executing an Hispanic prisoner on death row later that night. When the medical assistant goes to put the IV into the prisoner, he can’t find any veins because the man didn’t drink any water that day. So, in a last-ditch effort, he finds the femoral artery. The execution team thinks they’re in the clear, but the man starts seizing because the artery blew. The man eventually dies, but the event causes a commotion with the media.

Cut to another death row inmate’s cell. An African American man, Anthony Woods, is in prison on death row for allegedly killing a police officer after committing robbery. Woods and his lawyer have done everything they can to try to convince the courts that the other man who was with him during the robbery is the one who committed the murder. They don’t believe him, and he’s given a death sentence.

Warden Williams is making sure everything is going to go smoothly for this next execution, getting the right team of medical officials and guards ready. Meanwhile, at home, her marriage is failing because of the emotional strain of her job. She is feeling every little bit of the work she is doing, and it’s eating away at her on the inside. Essentially, she’s become withdrawn and morose, and ends up her day having some drinks at a local bar.

In the days leading up to Anthony’s execution, he finds out he has a son. This revelation shocks him and gives him hope the governor could still grant him clemency. Woods meets with his lawyer to try and convince him that they could still make it out of this alive. The lawyer isn’t so sure. In fact, he’s decided to retire, which makes Anthony’s case is his last one. Despite that, Anthony’s hope pushes Anthony to continue to have faith in his lawyer.

Will the governor grant Anthony clemency? Will Warden Williams overcome her angst about the executions over which she must preside?

CLEMENCY is an emotional movie. The audience is taken through the burden that the warden has to face every day, along with the weight that the executions contains. The stress and guilt from her job carries over into everything she does, which makes the audience feel for her. The acting is superb, especially by Alfre Woodard as the warden and Aldis Hodge as Anthony. Also, by the end, the movie generates much sympathy for Anthony, who maintains his innocence yet still expresses condolences to the family of the policeman whom he’s accused of killing. The movie definitely sides with Anthony’s declaration of innocence.

CLEMENCY has some overt Christian references. For example, the prison minister, a white man, reads Romans 8:38-39 to Anthony while he waits for his execution. Also, the first prisoner who’s executed in the movie’s beginning recites the Lord’s Prayer before the execution is carried out. The movie also extols love and forgiveness.

Despite that, and other positive Christian, moral content, the warden’s personal angst is never resolved. In fact, though she eventually makes an effort to fix things with her husband, the last scene, which focuses on her face, makes viewers wonder if she will ever get over her PTSD about her job. Apparently, the warden is troubled by the fact she has to remain impartial and coldly professional while she carries out these executions. Anthony will be her 14th execution, and the stress and guilt is crippling her psyche. Thus, in the end, the Christian, moral values depicted in the movie don’t lead to a happy ending for Anthony or the warden. In that light, it’s noteworthy to point out that, when the warden reads Romans 8:39, he leaves out the verse’s reference to Jesus, which says that nothing at all “will be able to separate us from the love of God that is in Christ Jesus our Lord.” The minister stops at the word God. After this scene with the minister, the only positive things in the movie’s last scenes are the minister praying during Anthony’s execution, and Anthony giving his condolences to the slain officer’s family and then telling the prison officials and the court officials “may God have mercy on your souls” for executing an innocent man.

CLEMENCY is also marred by four “f” words and one GD profanity. It also has two scenes of strong violence. In the first scene, the Hispanic prisoner goes into convulsions when the lethal injection goes wrong. Then, there’s a small pool of blood on his body where his blood vessel has burst. In the second scene, there’s some blood when a distraught Anthony tries to kill himself by banging his head against the cement wall of his cell before guards finally stop him. These scenes are more disturbing than they are really graphic. In another scene, a coworker takes the inebriated warden’s car keys away in a bar parking lot. Finally, there’s a brief implied sex scene between the warden and her husband and a scene where they dance in their living room while celebrating their anniversary, and her husband hugs her and sticks his hand under her blouse. These scenes and the foul language clearly warrant extreme caution for CLEMENCY.

All that said, it should be noted that the filmmakers don’t turn CLEMENCY into a leftist diatribe on racial politics. Even so, like many movies that criticize America’s judicial system, the movie generates only minor sympathy for victims of violent crime. In actual fact, very few convicted murderers are executed for first degree murder in the United States. The number of executions in the U.S. have declined significantly in the last couple decades. Also, in 2014, there were 32 executions, but in 2019, there were only 22. In 2018, however, there were more than 1735 murder victims in California alone! Of course, this doesn’t mean that the judicial system shouldn’t try to make sure that no innocent people are executed or sent to jail for a murder or murders they didn’t commit, or that the system shouldn’t try to make sure there is no economic or racial inequality under the law when it comes to criminal cases.