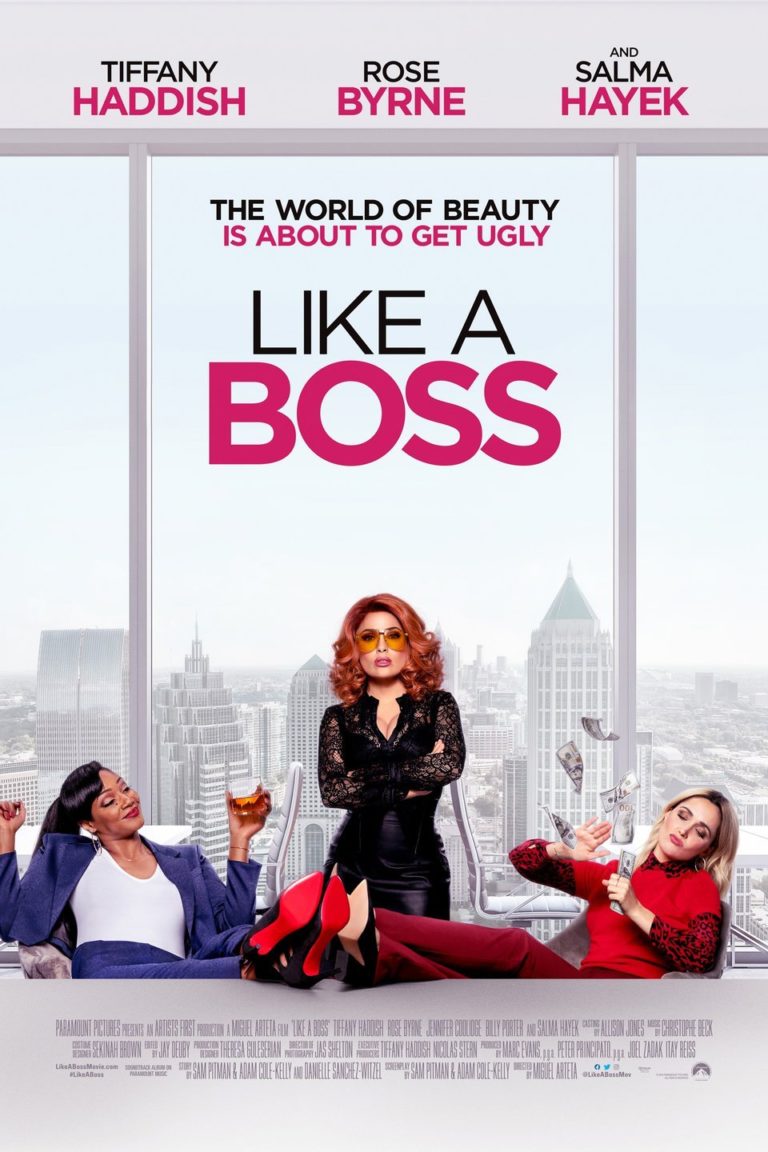 LIKE A BOSS follows young business partners and best friends, Mia and Mel. They’ve their own successful cosmetics brand but haven’t managed to pay back their enormous debt of half a million dollars. So, when the girls are made a business offer, they take it. Beauty mogul Claire Luna offers to pay their debt, as well as invest another one million into their company. However, they must create a new brand Claire will be proud to present at her beauty launch. When this pressure becomes too much, Mia and Mel have to decide what’s more important, success or their friendship?

LIKE A BOSS is like many comedies recently. The humor’s a bit over the top, almost like a sitcom, but with raunchy jokes and perverse punchlines. Although there are some, the story’s predictable. The movie’s worldview is negative. The characters base their decisions on what’s good for themselves, what will feel good in the moment, and what will bring more money. LIKE A BOSS contains excessive foul language and other strong objectionable content. So, moviegoers should look for something more appropriate to watch.

(PaPa, Ro, Fe, Ho, B, C, Cap, LLL, V, SS, N, A, DD, MM):
Dominant Worldview and Other Worldview Content/Elements:
Strong mixed pagan worldview with no redemptive content, characters make their decisions based on what is best for them and what will help them to pursue their dreams best and what will make them the most money, there are also some feminist themes with the story causing the audience to cheer for the female characters over the men who are portrayed as very chauvinistic, some homosexual elements as a secondary character is presumed to be homosexual, and the main characters frequent a homosexual/drag karaoke bar, with some light moral, redemptive elements when the main characters realize their friendship is more important than success and money, plus some pro-capitalist elements
Foul Language:
At least 71 obscenities (including more than 20 “f” words), six light profanities, a use of the middle finger, some crude name callings, comments about bowel movements multiple times, and a woman spits out her food and later spews milk all over someone else
Violence:
Light comic violence as two women throw items at security guards causing them to fall down an escalator and then later throw things at their more sensitive body parts
Sex:
Implied fornication on a few occasions, as well as plenty of inappropriate and completely unnecessary comments regarding sex, sex dreams, sexual acts, and body parts, and a woman describes how she and a man have a “casual sex” understanding
Nudity:
Upper male nudity shown a couple of times both in either post-coital or pre-coital situations
Alcohol Use:
Characters are shown having alcoholic drinks throughout the movie whether it be at a baby shower, a bar, a house party, or a dinner party, although there is no shown or obvious drunkenness
Smoking and/or Drug Use and Abuse:
Main characters smoke marijuana regularly throughout the movie, once during a baby shower in which they accidentally drop their joint beside a baby lying in his crib and joke about him smoking, and there is a joke about somebody’s mother cooking meth; and,
Miscellaneous Immorality:
Moderate levels of miscellaneous content, a woman is gifted a cake at a baby shower that’s meant to be a visual depiction of what her private area will look like as the baby comes out, negative portrayals of families and some dysfunction talked about, major themes of greed as many decisions are based around the pursuit of money or success.

LIKE A BOSS follows Mia and Mel, two girls who’ve been best friends since middle school and now are roommates and business partners. They have started their own cosmetics company, making their own products and selling them in store and online. They have a best seller package that’s sold thousands online, but their in-store sales haven’t really picked up since they opened their doors. They’ve been working hard for years, but their friends are married, having children and giving them a hard time about not doing the same thing. However, they claim to be married to their work, and as long as they have each other, they know that everything will be fine.

One morning, Mia and Mel begin their daily routines at their cosmetics store. Mel, who is the one to normally handle the finances and the logistics of the company, sees that they have some unpaid bills due, and she’s beginning to worry. Mia is the more creative part of the duo, and while she’s doing a young girl’s make up for her homecoming, Mia gives her a “cutie” discount. Mel stresses to her they can’t be giving out discounts in the store, but Mia assures her everything will be fine.

Suddenly, a young man walks into the store, claiming that cosmetics and beauty tycoon Claire Luna is interested in their business and would like to meet with them. Although Mia is opposed to having anyone else have a say in their business, Mel breaks to her the news that they are almost half a million dollars in debt. Mia agrees to meet with Claire, but is determined to drive a hard bargain and remain in control of their company.

Claire seems to have everything, with other small companies dying to have her invest in them as well. She tells them she will take care of their debt for them, as well as invest an additional million dollars in them. All they have to do is make her a presentation the following day for her upcoming beauty launch, and she also wants 51% of their company. Unwilling to relinquish the control of the company, they agree on 49%, as long as neither Mia and Mel back out. Otherwise, Claire takes 51%. Confident that their friendship is strong enough to withstand Claire Luna, they agree.

Although Mel wants to immediately begin working on their presentation, Mia wants to attend her friend’s birthday party, and there she has inspiration hit her. They make a video about how they want their make-up to stand for girls that are proud of themselves and don’t want to cover up their faces, but rather embellish their favorite features.

Although the presentation is warm and heartfelt, Claire hates it. She says it’s the opposite direction of where they should be taking their brand. She seems to have a secret agenda to break the girls apart, and it’s beginning to work. As the girls work to please her, the tensions between the best friends grow and grow until they are about to explode. It seems that their friendship couldn’t withstand the pressure that millions of dollars put on it, and the girls have to decide what’s really important in life.

Will they let Claire take control of the company? Or, will they be able to put aside their differences and come together as friends again?

The reason why this movie is barely an hour and twenty minutes is because there really isn’t much story there in the first place. The potential to be a cute story about true friendship is washed over with perverse humor, sex and obscenities. There are some legitimately humorous moments, with some of the secondary characters shining more than the main two. It’s a very typical and predictable storyline and could be perceived as pretty mindless entertainment. It really goes to show that a mediocre storyline with a few star names attached can easily get more than enough funding for the big screen.

However, LIKE A BOSS also showcases a lifestyle full of a lack of morality and dignity. The humor is overly perverse, with jokes that should never, ever be said, and would never be missed. The foul language is also excessive, with at least 76 obscenities and profanities. Although nothing is shown, the attitude toward sex is very casual and permissive, with partners who are not in any type of relationship besides sexual. The movie carries a mostly negative worldview as well, with the storyline mostly centering around money and success, although there is a light redemptive element as the main characters decide to value their friendship over greed. However, the very small redemptive qualities in this movie don’t overshadow the negative. Most moviegoers will want to see something more uplifting and less predictable.