"When the Truth Needs To Be Told" 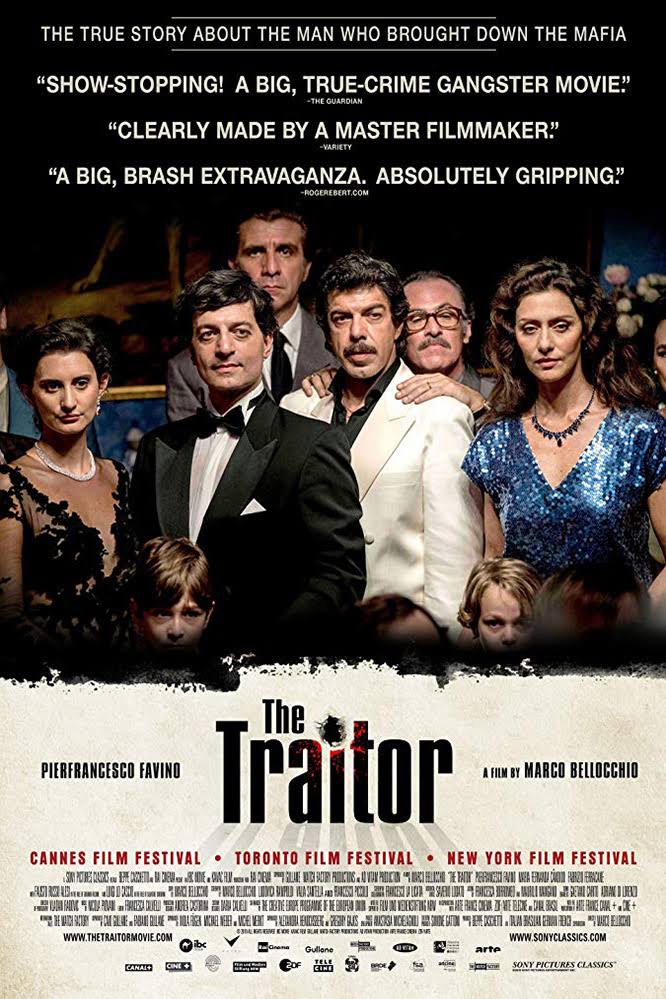 THE TRAITOR is an Italian movie about Tommaso Buscetta, the first whistleblower of the Sicilian Mafia in Italy in the 1980s. The movie begins in Brazil, where Tommaso Buscetta is arrested by the authorities and flown back to Italy. At the same time, his two adult sons disappear, so he decides to collaborate with the Italian government to testify against many powerful mobsters. This partnership causes chaos. After the first trials, Tommaso and his family are placed in a witness protection program in America. He lives a long life there, but he’s always checking over his shoulder.

THE TRAITOR is the Italian Oscar entry for 2020. It tells a compelling story and holds up well with its competitors, but it’s too long. The actors deliver very natural performances, and the movie’s style complements them. However, the content is excessive, with an extreme amount of bloody violence, explicit nudity and lewd content. THE TRAITOR contains some Christian, moral elements, including repentance, forgiveness and references to church, but the title character makes the final decision for himself about what is moral and immoral.

(PaPa, B, CC, LL, VVV, SSS, NNN, AA, DD, MM):
Dominant Worldview and Other Worldview Content/Elements:
Strong mixed pagan worldview with Christian and moral elements where characters are selfish, but the main character agrees to collaborate with the law because the gangsters he associated with have turned to killing women and children, plus some overt Christian elements involving repentance, forgiveness and being raised in the Catholic Church
Foul Language:
16 obscenities (including seven “f” words), one profanity, a man makes obscene gestures as an insult, and a few perverse names
Violence:
Strong and extreme violence and blood includes a man hits his son, a woman bites another woman’s ear causing it to bleed, countless killings by gunfire, a few torture scenes, one scene where a man’s arm is chopped off with a machete, one suicide attempt, a man sews his mouth shut refusing to talk, and the sight can be pretty disturbing, one major explosion on a road that results in multiple deaths, and two young men are strangled to death
Sex:
Multiple sex scenes, some between a husband and wife and some with prostitutes, adultery and a woman talks to her husband on the phone while touching herself
Nudity:
Full male frontal nudity three times as a man strips his clothes off multiple times as a protest to court proceedings, two sex scenes showing full rear male nudity and upper female nudity, upper female multiple times and once while a woman talks on the phone with her husband and touches herself, and one scene on a beach with people in swimwear
Alcohol Use:
Alcohol use throughout the movie, with two examples of drunkenness
Smoking and/or Drug Use and Abuse:
Smoking cigarettes and cigars throughout the entire movie, and drug content as characters talk about heroin distribution, but it’s never shown or used; and,
Miscellaneous Immorality:
Lying, kidnapping and threats throughout the whole movie, family dysfunction where a father puts his own safety above his children.

Based on the real life of Mafia informer Tommaso Buschetta, THE TRAITOR is an Italian movie. It starts out in Brazil in the 1980s. Tommaso has been living there with his family, as well as the extended family that he has within “La Cosa Nostra,” the Sicilian Mafia in Italy. He joined when he was a teenager and devoted all the loyalty in his life to this hierarchy.

However, recently the local mobsters have recently gotten into the heroin business, and the dynamic has majorly shifted. Tommaso is starting to want out, talking to one of his friends, Pippo Calo, about taking their families and moving out into the Amazon in Brazil and escaping this life of crime.

One night, Tommaso’s home is infiltrated by the Brazilian police, taking him into custody and searching his house for drugs. They decide to hand Tommaso over to authorities in Sicily, but they have to take him to the hospital for a checkup before he can leave, so that the Italian government knows that he wasn’t physically abused. On the way there, however, Tommaso begins convulsing and foaming at the mouth. His attempted suicide is unsuccessful, and he recovers in the hospital, before being flown back to Italy under the careful watch of the law.

Soon, Tommaso is introduced to his new home for an indefinite period of time, as well as the judge who will be handling his deposition, Giovanni Falcone. He has agreed to reveal secrets of the Mafia, although he repeatedly denies he’s a snitch. He claims that the values of Cosa Nostra have changed, and so he is not betraying it, everyone else has. Day after day, Judge Falcone and Tommaso sit down together and discuss the dealings of the Mafia, and the roles each person played, over espresso and cigarettes.

However, this information doesn’t come without repercussions. Two of Tommaso’s sons are murdered, as well as his sister’s husband. Chaos is erupting in all the lives of anyone associated with him, and his family is moved to a secure house that’s well guarded by the police.

Eventually, Tommaso is joined by another former member of Cosa Nostra, a man named Totuccio Contorno who has also decided to collaborate with the police. They eat dinner together and reminisce about the good times they had in other prisons before. They will soon be going to trial and will be face to face with all the men who they have exposed. Upon entering the trial, many of these men ask for the opportunity to cross examine Tommaso and Totuccio. The lies spill out of everyone’s mouth, and they yell at these two men, calling them traitors and other names. The courtroom is madness, and one man even strips his clothes off in rebellion while shouting obscenities.

The trials continue for years, even after Tommaso is moved to the United States in a witness protection program with his family. He still feels the threat of the Mafia everywhere he goes, leaving a restaurant before even ordering dinner when a guitar playing Italian sings a song that makes him suspicious.

Based on true events and real people, THE TRAITOR tells the story of the first whistleblowers of the Sicilian Mafia in Italy. The movie is the Italian entry for the 2020 Oscars. As such, it’s a worthy competitor. However, THE TRAITOR is very lengthy and sometimes feels rather repetitive, as well as difficult at times to keep track of the many names and characters. The style of the storytelling is very appealing, though, and it’s easy for viewers to get involved in the story. The actors provide very natural performances and do well to portray the real people from this time period. However, there’s an extremely high amount of graphic content throughout the movie, including scenes of bloody violence and explicit nudity. THE TRAITOR contains some Christian and moral elements. For example, there are elements of repentance and forgiveness, plus references to being raised in the Catholic Church. However, the title character decides what immorality is permissible and what is not, so THE TRAITOR has a mixed dominant worldview. Ultimately, the movie’s graphic content is excessive.