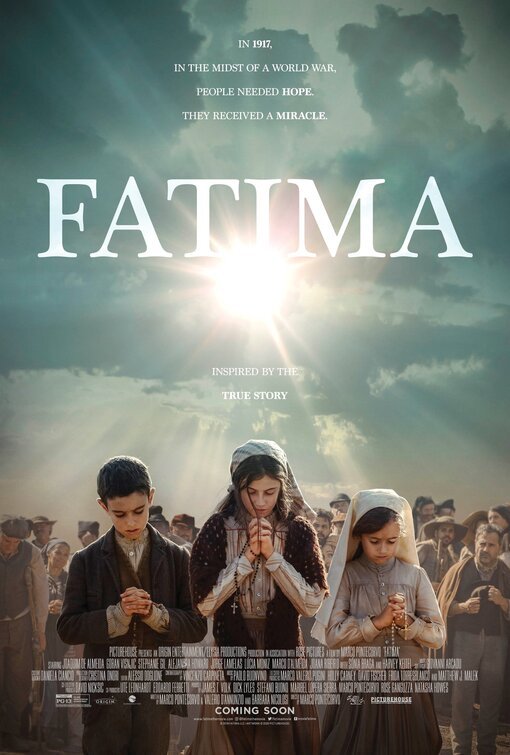 FATIMA is a drama about the apparitions of an angel and the Virgin Mary to three shepherd children near a small town in Portugal during World War I. In early 1917, an angel visits 10-year-old Lucia. The angel tells her to pray for peace. Then, the Virgin Mary appears to Lucia and her two younger cousins. Mary asks the children to return monthly to the same place for the next six months. Word of the apparitions spreads. They generate controversy with the children’s families, the town, their church, and with the secular, Anti-Christian government.

FATIMA is stirring, inspiring spiritual drama. The directing and acting are terrific, including the performance of Stephanie Gill. She breathes life into the young Lucia and carries the movie on her young shoulders. FATIMA stresses faith in Jesus, the conversion of sinners, and dedicating yourself to love of Jesus and humanity, as reflected by the Virgin Mary’s own devotion to them. FATIMA has many inspiring moments of faith. MOVIEGUIDE® advises caution for younger children, however, because of some war images and a brief scary vision of Hell.

(CCC, BBB, H, Ab, ACACAC, VV, M):
Dominant Worldview and Other Worldview Content/Elements:
Very strong Christian, morally uplifting worldview from a Catholic perspective with a rejection of Anti-Christian atheist skepticism, appearances of the Virgin Mary, references to the “immaculate heart of Mary” which symbolizes the love Mary has for God the Father and her son Jesus and her love for humanity, Mary encourages child to have the same love and to be dedicated to the “conversion of sinners,” Mary and an angel ask people to pray for peace, references to the Holy Trinity, people pray the rosary which includes saying “Hail Mary full of Grace” and “blessed be the fruit of thy womb, Jesus,” people pray for blessing from God “through our Lord Jesus Christ,” and people deliberately defy the secular government’s totalitarian hatred and fear of Christianity
Foul Language:
No foul language
Violence:
Scenes of war include explosions and soliders getting shot, a brief scary vision of Hell depicts fires, people burning and sounds of screaming, girl has a nightmare of a snake after the local priest wans her about the Devil, mother slaps young daughter
Sex:
No sex
Nudity:
No nudity
Alcohol Use:
No alcohol
Smoking and/or Drug Use and Abuse:
No smoking or drugs; and,
Miscellaneous Immorality:
Movie focuses too much on the Virgin Mary, so it may upset some Protestant Christians, but it doesn’t neglect Jesus and its focus on converting sinners is very commendable.

FATIMA is a new drama about the multiple apparitions of an angel and the Virgin Mary to three shepherd children near a small town in Portugal in 1917 during World War I, and the consequences of the apparitions to them, their families and the town. Based on a real story, FATIMA is a stirring, inspiring spiritual drama stressing faith in Jesus, the conversion of sinners and dedicating yourself to the love of God the Father, Jesus and humanity, as reflected by the Virgin Mary’s devotion to those things.

The movie opens in early 1917. Lucia, a 10-year-old girl living near Fatima, Portugal, is tending her family’s small herd of sheep when she is visited by an angel who calls herself “the Angel of Peace” (in the real event, Lucia was visited by male “angel” or messenger from God). The angel gives Lucia a vision of World War I, specifically a battle that her older brother, Manuel, seems to survive. The angel encourages Lucia to love God, have hope and pray for peace.

Cut to 1989. A professor writing a book on Lucia comes to visit her in the convent where she lives. He starts asking Lucia questions about what happened in 1917, and the two begin to engage in a friendly debate about faith, miracles and science. The rest of the movie will intersperse little vignettes of this debate between Sister Lucia and the skeptical professor as it shows viewers what happened to Lucia in 1917.

On May 13, 1917, Lucia is tending the family sheep and playing with her younger cousins, Francisco and Jacinta. A beautiful woman in white visits Lucia. At first, Francisco and Jacinta can’t see her, but they start seeing her too. The woman says she comes from Heaven. She tells the children to return to the same spot once a month for the next six months. She also tells them to pray the rosary every day to bring peace to the world and to end the war. “The world needs peace,” the lady adds, before she disappears.

Lucia and Francisco swear little Jacinta to secrecy, but Jacinta spills the beans to her and Francisco’s parents. At a family meeting with Julia’s mother and father, Julia’s mother, Maria, accuses Julia of making up stories. First, it’s an angel, then a vision of Manuel and now it’s the Mother of God!

Hurt and upset, Lucia runs to the church and prays to the Virgin Mary. The priest catches her, and Lucia tells him what she saw. This only makes Lucia’s mother even more angry. The priest points out that Lucia’s vision of the Virgin Mary may have come from the Devil, to tempt her young soul. The priest also points out the Lucia’s mother that, if word gets out about Lucia’s, it could be dangerous for her family and the church because “anything related to religion is ill received by many.” The priest’s words reinforce what the local secular atheist mayor says in a previous scene, where he tells the townspeople that the “progressive” government is trying to move away from the “feudal” times of “ignorance and religious superstition.”

Word spreads about the first apparition, however, and a month later, people start to approach the children asking for miracles and favors from the Virgin Mary. At the appointed time, on June 13, some of the people are waiting by the place where the first apparition occurred. The Virgin tells the children to keep praying the rosary and advises them to learn how to read. When Lucia tells her they want to go to Heaven with her, she tells them that Francisco and Jacinta will be joining her soon in Heaven, but that Lucia will have to stay, because “Jesus has chosen you because you are going to be the messenger of faith in Mary’s immaculate heart.” Lucia asks for a miracle for a boy in the crowd who can’t walk. The lady assures her that the boy will be able to walk if he believes. After the lady disappears, the boy starts to walk.

The miracle causes a sensation in the town. However, the skeptical mayor tells his Catholic wife that he had talked to the boy’s doctor several years ago, and the doctor said the boy would be able to walk if he just starts working on developing his muscles to walk. Meanwhile, some of the townspeople are not so happy about the children’s claims of having seen the Virgin Mary.

Tensions mount after the third apparition in July when the secular mayor decides to close the local church. Tensions mount again when he takes the three children from their families to have them interrogated by a psychiatrist. The Catholic authorities become concerned that the government will take even further action against them if the children don’t recant.

Will Lucia and her cousins remain strong in the face of all this pressure? What new revelations will the Virgin bring next?

FATIMA is a stirring, inspiring spiritual drama. The flash forwards to the interviews between Sister Lucia and don’t seem to get in the way of the main story, even though nothing seems to be at stake in them. They do, however, lend some theological context to Sister Lucia’s experiences in 1917. For example, when the skeptical professor questions her about the theological ins and outs of supernatural experiences, Sister Lucia wisely and humbly replies that she doesn’t fully understand how God works out such things, she only is giving him her personal testimony about what she experienced.

The movie is shot in a realistic style. This kind of filmmaking style helps ground the supernatural events occurring in the three children’s story. It also allows the actors to carry the dramatic weight of the script, and the story it’s telling. As a result, most of the acting in FATIMA is excellent and powerful. The director, Marco Pontecorvo, brilliantly directs them and the onscreen action to engage the viewer in the strongest way possible with the story and characters. A special kudo should be delivered to Stephanie Gill, the young actress who breathes life into the young Lucia. She is truly marvelous.

FATIMA has strong Christian worldview from a Catholic perspective. The Catholic Church leaders were originally skeptical about the appearances of the Virgin Mary to the three children. However, in 1930 the Catholic Church declared the apparitions “worthy of belief.” The credibility of the appearances has increased since then, partly based on the witness of Lucia’s positive example as a faithful nun until she died at the age of 97 in 2005.

In addition to the appearances by the Virgin Mary to the children, the movie includes positive references to Jesus and the Holy Trinity. Also, Mary encourages Lucia to be dedicated to the “conversion of sinners,” and Mary and the angel ask people to pray for peace. In addition, people pray for blessing from God “through our Lord Jesus Christ,” and people defy the secular Portuguese government’s totalitarian hatred and fear of Christianity.

The movie does, of course, promote some controversial Catholic doctrines about the Virgin Mary that Protestants may not like. For example, Mary encourages the children and the people watching them to “pray the rosary.” In the movie, they start with the prayer, “Hail, Mary, full of Grace, the Lord is with thee; blessed art thou among women, and blessed is the fruit of thy womb, Jesus. Holy Mary, Mother of God, pray for us sinners, now and at the hour of our death.” This prayer is a familiar prayer to many people, including many Protestants, but to “pray the rosary” in the Catholic Church usually begins with the words, “In the Name of the Father and of the Son and of the Holy Spirit,” the words that the resurrected Jesus instituted in the Gospel of Matthew 28:18-20. The movie easily could have avoided Protestant objections to this rosary prayer in the script by beginning, at least once, with these words before launching into the specific prayer about Mary.*

Thus, while the movie focuses on Mary and her “immaculate heart,” it connects them to Jesus several times and, in the end, ultimately focuses the viewer’s attention on the need to dedicate themselves to the conversion of sinners. In the movie, both the angel and Mary communicate a love for humanity to Lucia and her cousins. They also tell the children to admonish people to stop insulting God.

Ultimately, therefore, FATIMA is a movie that both Catholics and Protestants (and other Christians for that matter) can support. It has many inspiring moments of faith for all Christians. MOVIEGUIDE® advises caution for younger children, however, because of some war images and a brief scary vision of Hell.