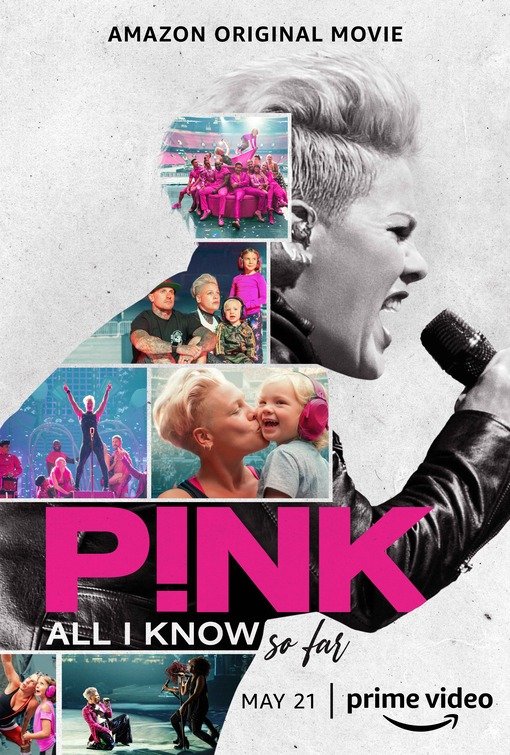 Amazon Prime’s P!NK: ALL I KNOW SO FAR follows popstar P!nk as she, her husband and their two children travel through Europe as P!nk performs. Together, P!nk and Carey troubleshoot the highs and lows of being on the road. What happens when one child gets sick? How do you navigate fame while traveling and trying to find new experiences when overseas? These are all questions P!nk ponders with her audience as the documentary progresses.

P!NK: ALL I KNOW SO FAR has a mixed worldview. The movie has some moral elements stressing the value of parenting, love, marriage, and raising children to have manners. This content is mixed with some Romantic elements about personal relationships, some light feminist comments about being a strong female leader and about female styles of parenting, and a humanist comment about people choosing their circumstances. Sadly, ALL I KNOW SO FAR has plenty of foul language, including more than 10 “f” words. The movie also has social and celebratory drinking in many scenes. So, MOVIEGUIDE® advises extreme caution for the movie P!NK: ALL I KNOW SO FAR.

(PaPa, BB, RoRo, Fe, H, Ho, PC, LLL, V, S, N, A, M):
Dominant Worldview and Other Worldview Content/Elements:
Mixed pagan worldview with moral, biblical elements stressing the value of parenting, saying “I Love You,” marriage, raising one’s children to have manners, title character says she’s Jewish, one song lyric suggests the Devil is real, and prayer is depicted, but there’s no “in Jesus’ name” at the end, and title character swears during it too, and Romantic, but movie also Romanticizes what one’s children see in the legacy of their parent, and the beauty of life, plus some feminist comments about being a strong leader and businesswoman and the differences between men and woman in relation to raising children, there’s a humanist assertion that people choose their circumstances, one fan says that she herself is a lesbian, and there’s a politically correct comment about the state of the world;
Foul Language:
28 obscenities (including over 10 “f” words), and nine light profanities;
Violence:
Subject of documentary recounts a story where someone punched her in the gut while she spun in the air to train, son playfully rough houses with his father, man punches a punching bag for a workout, and mention of thoughts of suicide by a fan, but it doesn’t occur;
Sex:
Subject of documentary jokes about going to the “Red Light District” of prostitution in Amsterdam if she doesn’t get her costume mended in time for her performance;
Nudity:
Male dancer wear sheer tops, and some other sporadic upper male nudity, some female performers appears in bras and their underwear, upper child nudity;
Alcohol Use:
Social and celebratory drinking in many scenes;
Smoking and/or Drug Use and Abuse:
No smoking or drugs; and,
Miscellaneous Immorality:
Sexual harassment mentioned but not in detail, trite lyric in a song about there not being any sin.

Amazon Prime’s P!NK: ALL I KNOW SO FAR follows popstar P!nk as she and her husband and two children travel through Europe as P!nk performs on tour. P!NK: ALL I KNOW SO FAR is entertaining and well made, with some positive moral content about raising children and other subjects, but it’s marred by some Romantic elements, celebratory drinking and plenty of foul language, including more than 10 “f” words” and nine light profanities.

The movie begins with popstar P!nk, as she performs for a live audience in Amsterdam. Cut to the title and then zoom to footage of P!nk and her family. P!nk and longtime husband, Cary Hart, a professional motorcyclist, are just like normal families, except for the fame, of course.

Together, P!nk and Carey troubleshoot the highs and lows of being on the road. What happens when one of the children gets sick? How do you navigate fame while traveling and looking for new experiences when overseas? These are all questions that P!nk ponders with her audience as the documentary progresses.

At the heart of all these questions, P!nk and Carey remain optimistic about their family and professional lives and growing as a family unit. In voiceover narration, P!nk makes a point to stress that she loves how her children get to learn from experts in their field. She

also redirects her success back to her parents, who encouraged her from a young age to try new things and not to be afraid of failure.

The documentary highlights P!nk’s personal connections to the people on tour with her and her intent to know them all by name. Not to mention, the doc goes back to tell audiences how P!nk incorporates acrobatics into her performances and the genesis of her zeal for over-the-top, sellout crowds that come to see the superstar in full swing (pun intended).

How will P!nk and her husband continue to keep their family from spinning out of control amid all the craziness that occurs while on tour?

P!NK: ALL I KNOW SO FAR is entertaining and well-made. Archival footage is used at appropriate instances interspersed with performance sequences. Also, P!nk and her family life’s dynamic pairs well with the tension between her parenting and her worldwide fame. Some sequences are shot in black and white which adds a cool tone to the content and P!nk provides great voiceover narrator. Filmmakers also track the movement of P!nk and her family with titles that state where they are in the world, helping audiences understand just how busy the superstar is.

P!NK: ALL I KNOW SO FAR has a mixed worldview. The movie has some moral elements stressing the value of parenting, saying “I Love You,” marriage, and raising children to have manners. Also, P!nk says she’s Jewish, and there’s a general prayer to God. However, it also has some Romantic elements to P!nk’s parental relationship to her children and vice versa. In addition, the movie has some light feminist elements about being a strong female leader and businesswoman and the tensions between fathers and mothers when it comes to raising children. Also, there’s a humanist comment that people choose their circumstances, and a fan of P!nk’s says she’s a lesbian. Sadly, ALL I KNOW SO FAR has more than 35 obscenities and light profanities, including more than 10 “f” words. The movie also has social and celebratory drinking in many scenes. So, MOVIEGUIDE® advises extreme caution for the movie P!NK: ALL I KNOW SO FAR.

Watch P!NK: ALL I KNOW SO FAR: