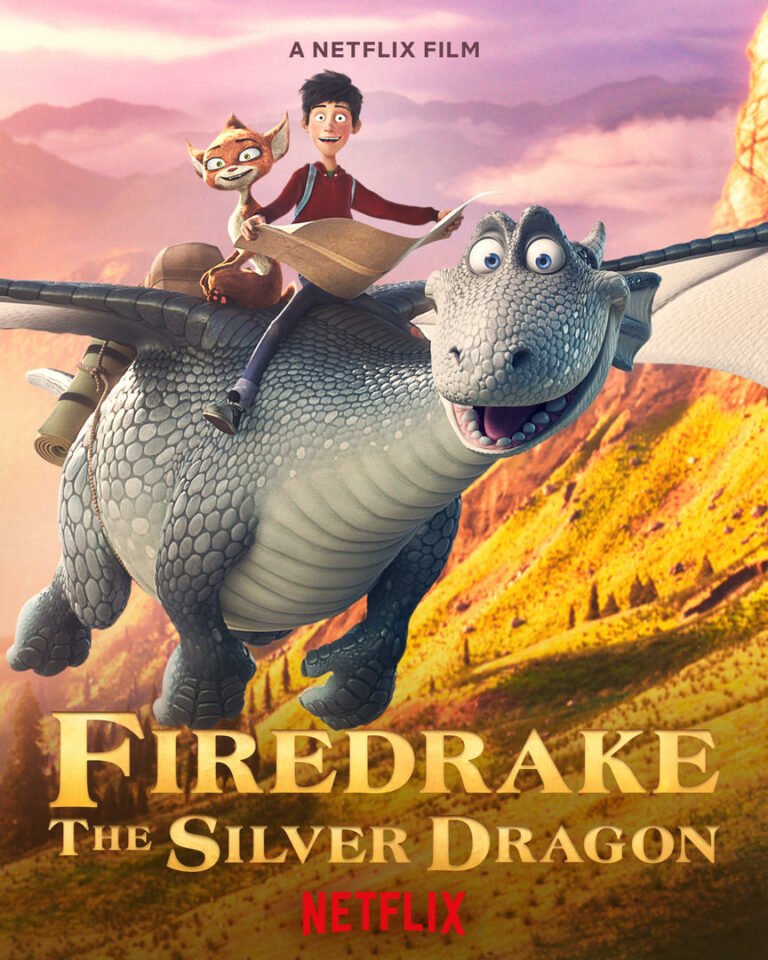 FIREDRAKE THE SILVER DRAGON is an animated German fantasy movie on Netflix that’s been dubbed into English. The story follows Firedrake the silver dragon, and his friend, Sorrel the brownie, as they go on an adventure to find a new home for the dragons and other magical creatures in their valley to avoid being attacked by humans. Along the way, the two mythical creatures come across Ben, a young orphan boy who claims to be a dragon rider to avoid trouble. Begrudgingly, the trio finds themselves on a fantastic worldwide adventure. They encounter many mythical creatures, an all-knowing genie, fantastic creature experts, and an alchemically made dragon eating machine.

FIREDRAKE THE SILVER DRAGON is well animated, with a cute story. However, the plot seems to be incredibly random and hard to follow. Also, the story is very simplistic and isn’t deep, and it has an cheesy dialogue. However, the main worldview is a moral, redemptive one inspiring people to admit to their mistakes, rise above their faults and learn to grow to become the best versions of themselves.

(B, C, O, L, V, M):
Dominant Worldview and Other Worldview Content/Elements:
Light moral, redemptive worldview set in a fantasy world of magical, mythological creatures, such as the characters grow in a moral way, title character learns to become more confident and hold strong to his faith, another character goes from being distrustful and the mythical creature version of racist to being a more kindly and open-hearted individual, a human character goes from being a thieving street rat to a noble young man, who loves his friends, but there are no references to God, Jesus or the Bible, and there is some occult, magical elements such as an all-knowing genie, and an evil machine created by using alchemy
Foul Language:
One instance where villain says an “h” word
Violence:
A mild level of fantasy violence where villain fights both a genie and the title character using fire attacks
Sex:
No sex
Nudity:
No nudity
Alcohol Use:
No alcohol use
Smoking and/or Drug Use and Abuse:
No smoking or drugs; and,
Miscellaneous Immorality:
Ben at the beginning of the film was shown stealing jewels, and he lies to Firedrake claiming to be a dragon rider. However, he admits these were wrong and makes amends later.

FIREDRAKE THE SILVER DRAGON is an animated adventure fantasy on Netflix where three unlikely companions go on an adventure to save all the remaining dragons on earth. The animation in FIREDRAKE THE SILVER DRAGON is wonderful, with an uplifting moral, redemptive worldview, but the story itself is a bit scattered and poorly paced and contains some occult, magical content.

The movie’s alternate history explains that long ago, humans, dragons and other mythical creatures lived together in harmony. Then the humans wanting to expand their civilization started taking over the homes of these creatures. The dragons asked the humans to stop their expansion. They responded with war and built a giant golden dragon like creature called Nettlebrand that attacked and ate all the dragons it could. This caused the dragons and other creatures to go into hiding avoiding the humans at all costs.

The actual story of the movie follows Firedrake, a young silver dragon who lives with other dragons and brownies in a Scottish valley. Firedrake wants to be a real dragon like the ones in the past rather than live in hiding from humans. However, human expansion is encroaching on his home. With only a month to figure out a solution, Firedrake decides he will seek out a dragon haven called the “Rim of Heaven.” Firedrake and his brownie friend, Sorrell, leave their valley to search for this haven. On the way, they stop in a city to get away from the cops and encounter an orphan human boy named Ben, who claims to be a dragon rider.

The remainder of the movie follows the three companions as they try to locate the “Rim of Heaven.” Along the way, they encounter treacherous dwarves, an all-knowing genie and Nettlebrand himself. The group finds that they all have things that they lack. Firedrake needs more confidence, Sorrell needs to learn to give others a chance, and Ben needs to learn how to let go of his past.

Ultimately, the animation quality of the movie is well done with little mistakes. It is an entertaining movie with a moral worldview. There are three main themes that arrive within the movie. Those themes include rising to the occasion to do the right thing, letting go of prejudice and moving on from tragedy. However, the movie has a few downsides. It has an incredibly cheesy dialogue that is not as engaging as it could have been. The movie also suffers from broken storytelling and pacing. FIREDRAKE THE SILVER DRAGON is also marred by some occult, magical content. The movie is a great expression of the imagination but depicts nothing groundbreaking.