"The Loud Family Takes on Scotland" 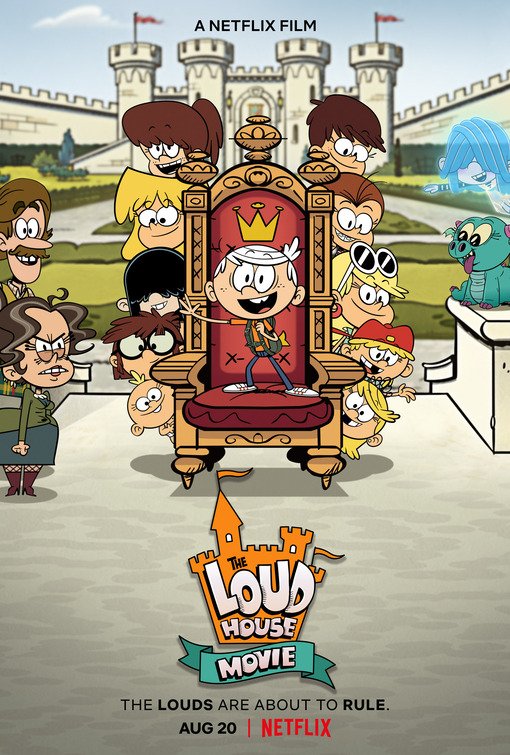 THE LOUD HOUSE MOVIE is an animated musical comedy on Netflix about an extremely large family. Lincoln is a kind, caring brother to his 10 sisters. He helps them develop their talents and succeed in their pursuits. However, he’s taken for granted and unappreciated. He also doesn’t think he has any talent. He wants to be special. Lincoln comes to believe the answers lie in his family history. Searching for answers leads him and his family on a trip to Scotland, where the family discovers they’re Scottish royalty. Lincoln claims his ancestral title as Duke, but this makes him selfish. Also, an evil caretaker plots against the family.

THE LOUD HOUSE MOVIE is very entertaining and funny, with delightful music and dancing. The main character shows great Christian virtues involving love and care for his family. However, a supporting character conjures up a dead relative during a séance, and a magical stone changes a good dragon into a bad one. Also, there’s some scatological humor in THE LOUD HOUSE MOVIE. The movie’s occult, unbiblical subplot makes THE LOUD HOUSE MOVIE unacceptable.

(PaPa, BB, OO, V, M):
Dominant Worldview and Other Worldview Content/Elements:
Strong mixed pagan worldview with strong moral, pro-family and pro-life elements rebuking being selfish and envious and promoting service to others when ruling people, family taking care of family, and having a large family, mixed with strong occult content where one member of the main family in the movie conjuring a ghost of their ancestors who helps them throughout the movie and more ancestral ghosts appear and help a Scottish town rebuild and talk to people at a party of celebration at the end and envious, jealous villain uses a magical stone to turn a good dragon into a bad destructive dragon, but the magical stone is eventually destroyed and male protagonist performs stage magic and sings about creating a “spellbinding act of magic”
Foul Language:
No obscenities or profanities, but there’s some scatological humor includes jokes about jock straps, dirty diapers (e.g., boy changes his baby sister’s diaper), the villain falls into a pile of manure, and nose-picking
Violence:
Scary images where a magically hypnotized dragon chases family and shoots balls of fire at them, villain orders hypnotized dragon to destroy town, two shops in town are destroyed, a character makes a suicidal comment about wishing to be dead, and there’s some slapstick light violence such as brother pulls rug out from under sisters, sisters fight to grab breakfast burritos, and a suit of armor falls apart when a clumsy man touches it
Sex:
No sexual content
Nudity:
No nudity
Alcohol Use:
No alcohol use
Smoking and/or Drug Use and Abuse:
No smoking or drugs; and,
Miscellaneous Immorality:
At times there is the presence of jealousy, grudges, pride, deceit, and manipulation, but all this is ultimately rebuked, plus one sister likes to sleep in a coffin.

THE LOUD HOUSE MOVIE is a zany animated musical comedy on Netflix that follows a boy and his 10 sisters, along with their parents, on a trip to Scotland. Based on an animated Nickelodeon series, THE LOUD HOUSE MOVIE is very funny, with delightful music and dancing, but the movie’s pro-family, morally uplifting content is spoiled by an occult, unbiblical subplot about a magical stone and a ghost helping the family.

Lincoln feels overshadowed by his 10 sisters, so he’s on a mission to find his family roots in Scotland, hoping it will help him find out why he is special. Special indeed. The Loud family discovers they are royalty and own a castle. The movie champions the importance and love of family, has pro-life themes as the family loves and welcomes babies, and promotes the idea that real power requires service. However, a main character conjures up a dead person’s ghost in a séance, and the ghost helps her and her family. There are also some scary images involving a hypnotized dragon ordered to breathe fire at some innocent people.

Lincoln is the only boy in his very large family. He is loving, kind, caring, and adorable, as he teaches his youngest baby sister the ropes on how to survive in a big family. Taking charge to help his ten sisters succeed, Lincoln is a model son and brother. The parents panic when they realize all 10 girls have a special event on the same day. Even after he misses out on breakfast, Lincoln throws himself into action. He arranges activities for his siblings. All he asks for in return is a place in the family.

Lincoln becomes disgruntled, however, when no one realizes he’s missing from the family photo. As a result, he feels lost and under-appreciated. Becoming more and more disillusioned, Lincoln confides in his friend from school. He recognizes that everyone else has a talent, or character trait, that makes them special. He doesn’t see anything about himself that makes him special. His friend brings Lincoln to the realization that he must find his family roots to discover what makes him special.

So, Lincoln sends his Dad’s DNA sample to an ancestry specialist. They trace the Loud family back to Scotland. The whole family is excited when they arrive in Scotland and discover that they have royal ancestry. In fact, the whole town, Loch Loud, is named after the family. The large clan celebrates arriving at their newly found family castle.

Upon further investigation, Lincoln finds out he’s the descendant of a young Duke who looked exactly like him. He has finally found something that makes him feel special. In an effort to outshine everyone else for a change, he decides to claim his crown as the rightful Duke of Loch Loud. Relishing his new role, Lincoln forgets all about his attitude of service, however. He becomes fixated on power. Angus, the castle groundskeeper, urges Lincoln to use his power to serve the people of Loch Loud and make improvements to the town.

Meanwhile, the Loud family finds out that the loch around which the town was built has always had a protector, a real dragon. They discover a hatched egg, and a baby dragon greets them. Lincoln’s baby sister, Lily, starts feeding the baby dragon some of their father’s breakfast burritos, and the baby grows exponentially into a full-fledged dragon with wings. Also, Lincoln’s sister, Lucy, conjures the ghost of a Loud ancestor who looks just like her.

Meanwhile, the castle’s female caretaker, Morag, uses deceit, manipulation, and Lincoln’s jealousy for his sisters to banish the family forever.

THE LOUD HOUSE MOVIE is very entertaining and funny, with delightful music and dancing. The main character shows great Christian virtues involving love and care for his family. However, THE LOUD HOUSE MOVIE as some potty humor and some scary moments where the villain hypnotizes a dragon. Worse, one of the hero’s 10 sisters conjures up the ghost of a dead relative, and the ghost helps the family. This occult content makes THE LOUD HOUSE MOVIE unacceptable entertainment. God condemns the occult practice of conjuring up the ghosts of dead people in Deuteronomy 18:10-12.