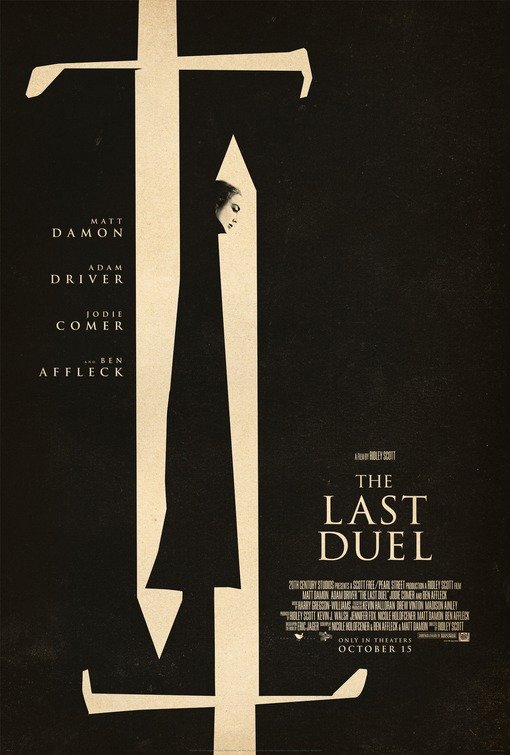 THE LAST DUEL is about a real-life 14th Century knight in France named Jean and his beautiful wife, Marguerite. One day, while Jean’s in Paris, Jacques, a rival who was a friend, forcibly enters Jean’s small castle and rapes Marguerite. When Jean returns home, Marguerite tells Jean what happened. At first, Jean’s angry and doubts her, but she convinces him. So, Jean appeals to the French government to allow Jean to defend his wife’s honor by ordering a trial by combat with Jacques. If Jacques kills Jean, however, Marguerite, who’s given birth to Jacques or Jean’s baby, will be burned at the stake.

THE LAST DUEL is a gripping, explosive movie. It tells a complex story well. However, the movie leans toward a Romantic, politically correct, modern feminist worldview. None of the major male characters come off unscathed. For example, though Jean sides with his wife, he’s depicted as being more concerned about vindicating himself than saving her. THE LAST DUEL also contains extreme sexual content, brief excessive sexual nudity and some graphic bloody violence. Therefore, THE LAST DUEL is not acceptable entertainment.

(RoRo, PCPC, FeFe, C, Ab, B, Ho, L, VVV, SSS, NNN, AA, M):
Dominant Worldview and Other Worldview Content/Elements:
Movie seems to lean toward a strong Romantic, politically correct, feminist worldview, with some Christian and Anti-Christian elements and some positive moral elements about a sex scandal in medieval France where a knight’s wife claims his rival invaded their castle and raped her when the servants were away where the movie depicts a medieval male-centered Catholic Christian society where rape was considered a crime against the husband rather than the wife, the villain serves a powerful evil nobleman who cheats on his wife and holds a public and a private orgy, the society’s leaders, who are Christian, believe trial by combat proves that God has judged the combat winner is the one in the right, a man in authority and a defense lawyer claim biblical morality and law say it’s not rape if the woman feels any sexual pleasure during it or if the woman becomes pregnant from the rape, one priest is depicted as more sensible when he takes a skeptical attitude when the villain tries to excuse or downplay his actions during a confession, and husband is somewhat of a conceited, self-interested hothead and at one point verbally harangues his wife for her public testimony and seems insensitive then and at other times, but he seems to love his wife and ultimately stands by her, and he also talks about right and wrong in one scene though he isn’t as tactful as he should be, plus three or four women on a large bed engage in some kind of lesbian touching and moaning in the background when the powerful nobleman in bed with them leaves the bed to talk to his right-hand man, but the lesbian orgy scene seems part of the corruption and licentiousness of the nobleman and the right-hand man who has raped his wife’s rival
Foul Language:
One “d” word that’s repeated when the same scene is shown from a different perspective, three or four anachronistic “f” words, one other obscenity, one “Good G*d” profanity, and MG exclamatory profanities
Violence:
Some very strong bloody violence includes a man is brutally stabbed to death in the mouth during a trial by combat, one soldier is brutally struck by a flaming arrow, and a few blood sprays occur during several medieval war scenes, plus strong violence includes several medieval battle with men on horseback, and men wielding swords and axes, one or two cavalry charges, flaming arrows strike and kills some men during one battle, a disturbing rape scene occurs, and it’s repeated from a different perspective, and two men in suits of armor engage in combat by jousting, swords, axes, and daggers (their two horses are wounded and fall during one of the three jousting charges), one man gets wounded in right thigh by sword, and man’s dead body is dragged away and hung upside down like a criminal for public display
Sex:
Very strong sexual content contains multiple sex scenes or scenes with sex and includes partially depicted marital sex in at least two scenes, partially depicted and implied fornication when a married evil count holds a drunken adulterous orgy on his large bed during a party, and the villain joins the orgy on the bed to engage in fornication with one young woman, villain rapes his rival’s wife, and the scene is shown twice (once from his perspective and once from hers, but there’s no nudity because they both are dressed, and it’s implied that the man lifts her dress and opens the top of his pants), villain talks with the evil count who’s engaged in having an orgy with three or four nude women on his bed, the women on the bed are depicted in the background engaging in some sort of lesbian touching as the count leaves the bed to talk with the villain, the villain mentions his rape of the rival’s wife but minimizes and discounts the woman’s protestations against the violation, saying it’s typical and of no consequence, though she clearly struggled and repeatedly told him no
Nudity:
Brief full frontal female nudity in a slightly darkened room as nude woman walks in front of the villain who’s entered a room to talk with his boss, an evil count, rear female nudity from afar, and images of upper male nudity (the nude sex scenes aren’t shot in close-up, so most of the nudity is not as explicit as it could be)
Alcohol Use:
Alcohol use and drunkenness
Smoking and/or Drug Use and Abuse:
No smoking or drugs; and,
Miscellaneous Immorality:
Betrayal, lying, women are mistreated.

THE LAST DUEL is a medieval tale about a knight in France who challenges his rival to trial by combat when the knight’s wife publicly testifies that the rival, a squire serving a powerful nobleman, raped her while the knight was away on business. Based on a true story, THE LAST DUEL is a gripping, explosive movie, but it seems to lean toward a Romantic, politically correct, modern feminist worldview and contains extreme sexual content (including a disturbing rape scene), brief excessive nudity, some graphic violence, and three anachronistic “f” words.

Jean and Jacques start off as friends. In fact, the movie opens with a battle during the Hundred Years’ War between France and England where Jacques saves Jean’s life. Later, however, Jacques betrays Jean, on orders from Pierre, by taking a choice piece of land away from Jean that Marguerite’s father had promised Jean as part of her dowry. Pierre takes the land to pay off the father’s tax debt and gives the land to Jacques. So, Jean angrily takes Pierre and Jacques to court, but the King sides with the powerful Pierre and his right-hand man, Jacques.

Then, Pierre makes Jacques the captain of the local troops, a position that was held by Jean’s grandfather and his father, who has just died. Jean is the better soldier and considers the position his to have. He angrily confronts Pierre and Jacques publicly, but Pierre mocks Jean while the other noblemen just laugh.

When Jacques has a son, Marguerite encourages Jean to go to the celebration for the baby. At the celebration, he and Jacques appear to bury the hatchet, but Jacques becomes attracted to Marguerite. One day, while Jean is in Paris on business, Jean’s mother has taken all the servants away to go into town for the day, leaving Marguerite all alone. Jacques uses his personal attendant to trick Marguerite into opening the door. Jacques barges into the small castle and declares his love for Marguerite. She tells him to leave, but he refuses and chases her upstairs to the bedroom, where he grabs her, throws her onto the bed and rapes her. Jacques leaves right after that.

When Jean returns home a day or two later, Marguerite tells him what happened. Jean at first is furious with her, but Marguerite assures him that what she says is true.

So, they publicly accuse Jacques of raping her, but Count Pierre rules against them. However, Jean appeals to the King and the Paris Assembly. He requests that they let Jean challenge Jacques to trial by combat, because, according to the law at the time, rape is a crime against the husband, not the wife. If Jean is killed during the duel, however, Marguerite will be burned at the stake for bearing false witness against Jacques, a respected nobleman who serves a powerful nobleman and servant of the French king.

THE LAST DUEL tells a gripping, explosive story. Although the story’s told according to three separate perspectives, it’s clear who the biggest villains are and who the biggest hero is. Count Pierre is a despicable person who cheats on his wife by holding public and private orgies. He has thoroughly corrupted Jacques, who prides himself on his good looks and his book learning. Jacques falls in lust with Marguerite because she too is good looking and has some book learning. In contrast, Jean is a humble soldier, though he, too, has a feeling of entitlement. Jean is also rather hotheaded and often tactless. However, Marguerite trusts her husband when he tells her Jacques can’t be trusted.

THE LAST DUEL tells a complex story surprisingly well. The three-act structure may seem a little clunky because the two later parts go over some of the same material that’s previously shown. However, the script is well written, and the second and third sections build on the last ones. The script is actually co-written by Matt Damon, who plays Jean, and Ben Affleck, who plays Count Pierre, with Nicole Holofcener.

However, the movie seems to lean toward a strong Romantic, politically correct, feminist worldview. Though it certainly can be said that, for centuries, laws in Western Civilization discriminated against women, depriving them of rights that were given to men. This was especially heinous when it came to society sanctioning or allowing violence against women. It’s also true, however, that the struggle for civil rights has been an ongoing issue for everyone in Europe, Great Britain and the United States. That’s why documents like the Magna Carta, the Declaration of Independence, the Bill of Rights, and the 1964 Civil Rights Act were written. The issue with THE LAST DUEL is that none of the major male characters in the story come off unscathed. Thus, for example, though he sides with his wife, Marguerite, Jean is depicted as being more concerned about vindicating himself rather than his wife’s claims of rape or saving her from a painful death. Even the women that the movie depicts as flawed, such as Jean’s mother and Marguerite’s friend, who betrays her, are seen as victims of male society. Despite this, THE LAST DUEL has some scenes of positive Christian faith, a clear sense that Jacques and Count Pierre are evil, and a small scene featuring a strong, ethical Catholic priest.

A bigger issue with THE LAST DUEL, perhaps, is that the movie contains extreme sexual content, brief excessive sexual nudity and some graphic bloody violence. Therefore, THE LAST DUEL is not acceptable entertainment.