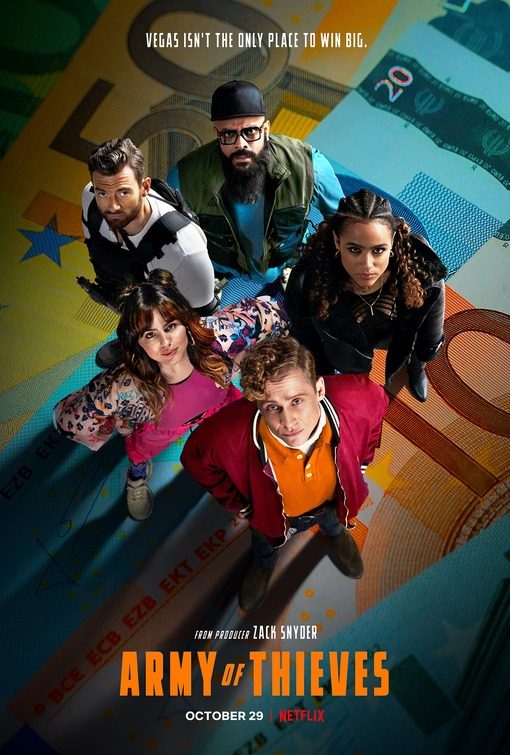 ARMY OF THIEVES is a prequel, streaming on Netflix, to the zombie thriller ARMY OF THE DEAD. It follows the comic adventures of German safecracker Ludwig Dieter. A mysterious woman, Gwendolyn, recruits Dieter to join her gang of thieves to rob the world’s most complex vaults. Ludwig finds himself drawn to Gwendoline. This engenders a jealous rivalry with fellow team member Brandon Cage while they stay one step ahead of an Interpol agent determined to stop them.

ARMY OF THIEVES has a terrific mix of laughs and adventure, thanks to a brilliant comic performance by lead actor Matthias Schweighofer, who also directs. The action is fast-paced but as bloodless as a Marvel superhero movie. The plot jumps smoothly from one heist to another, with some nifty visual effects. The movie’s tour de force action centerpiece occurs when Ludwig is forced to hop a bicycle to escape the police. The stuntwork and cinematography on this sequence are top-notch. However, outside the heists, the movie’s plot is thin. Also, ARMY OF THIEVES has lots of strong foul language and asks viewers to root for thieves.

(PaPaPa, LLL, VV, S, A, M): Dominant Worldview: Very strong pagan in a heist movie where viewers are asked to root for a gang of thieves to crack a bunch of safes and steal the money
Foul Language:
At least, 28 obscenities (including 19 “f” words), one Jesus profanity, and one GD profanity
Violence:
Strong action violence includes one big car chase scene turns into a bike chase, a man is shot in the shoulder resulting in a bloody wound, a woman punches and kicks and knocks out the guards of an armored truck, a man and woman pull guns on each other in a showdown, a police officer is shot by a thief, man shoots shotgun to scare people in a bank and uses tranquilizers to knock out multiple police officers, a zombie takes a bite out of a man in a news report, and three other brief nightmares show scary zombies approaching a man, but no violence occurs
Sex:
A few mild sexual jokes and references, as characters comment on the flirtation of a man and woman
Nudity:
No nudity
Alcohol Use:
In one scene, characters socially drink wine
Smoking and/or Drug Use and Abuse:
No smoking or drugs; and,
Miscellaneous Immorality:
The movie revolves around a series of heists, asking the audience to root for the thieves to succeed, and the jealousy of one gang member leads to his dangerous betrayal of another.

ARMY OF THIEVES is a prequel streaming on Netflix to the zombie thriller ARMY OF THE DEAD and follows the comic adventures of a German safecracker as he’s recruited by a mysterious woman to join a gang of thieves for a series of incredibly difficult heists. The movie sets up ARMY OF THE DEAD, because the final planned heist is the one that’s centrally featured in the previous movie.

Ludwig Dieter (Matthias Schweighofer) is a bank teller and an aficionado of heists who calls himself “The Safecracker” in a series of videos he hosts on YouTube about the world’s most intricate safes. One day, he receives a mysterious invitation to come to an unknown location at night, only to find that he has been enlisted to participate in a safecracking competition, in which the top contestant will be added to a gang (or “army”) of thieves.

Dieter is thrilled to find that the gang – featuring leader Gwendoline Starr (Nathalie Emmanuel), and fellow members Korina (Ruby O. Fee), Brad Cage (Stuart Martin) and Rolph (Guz Khan) – wants his assistance to crack the four toughest safes in the world, which are each named after an opera in Wagner’s “Ring” cycle of operas.

There is vast wealth to be found in each one of the safes, but they also have astronomical odds against being opened, ranging into trillions-to-one chances. But Ludwig is excited for the challenge, and joins them, beginning a flirtation with Gwendoline that spurs jealousy from Brad, instigating a fierce rivalry.

Can Ludwig pull off the daring mission to which he’s been assigned? Or will infighting and the dogged pursuit of an Interpol agent named Delacroix (Jonathan Cohen) ruin everything?

While ARMY OF THE DEAD had some dark laughs throughout most of its running time, ARMY OF THIEVES is a much lighter and funnier movie. Those expecting this to feature plenty of zombie action like DEAD – in which the thieves escape their heist only to find themselves running for their lives across a zombie-infested Las Vegas – might be disappointed.

That’s because THIEVES only briefly refers to the zombie apocalypse and only shows zombie attacks in a couple of short TV news reports and in a couple of quick scenes amid the news and in Dieter’s nightmares. The focus here is squarely on the series of heists and on Matthias’ hilariously wimpy reactions to the dangerous events surrounding him, and Schweighofer (who also directs the movie splendidly) delivers an outstanding comedic performance as he gasps and shrieks his way hysterically throughout.

Thus, aside from the quick zombie cutaways, THIEVES stands on its own as a crime caper and succeeds by being entertaining in its own right. The plot smoothly jumps from one heist to another, with the locks shown cracking via slick visual effects of the vaults’ interiors.

The movie’s tour de force action centerpiece of the movie occurs when, due to a betrayal, Ludwig is forced to hop a bicycle to escape the police. The stuntwork and cinematography on this sequence are absolutely top-notch.

The one weak spot of the movie is that the plot is pretty thin aside from the heist sequences, putting it solely on the shoulders of its able cast. The movie’s climax is also a letdown, merely setting up the transition to the events in ARMY OF THE DEAD rather than serving up another comic and exciting set-piece.

While the movie’s tone is mostly light and humorous and the plot’s action sequences could have easily made this a TV-14 movie, sadly there’s a fairly large amount of strong foul language in ARMY OF THIEVES. It also asks viewers to root for the thieves. ARMY OF THIEVES is only appropriate for adults with extreme caution.