5 Bible Stories that Could Be Fantastic Movies! 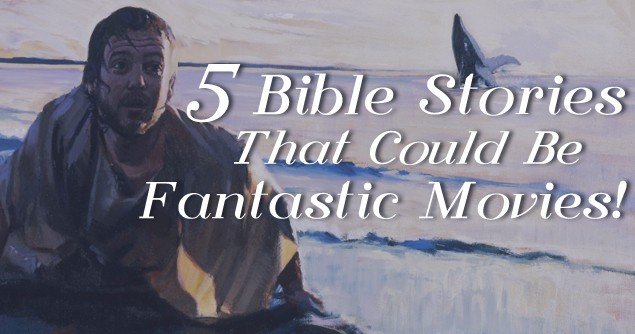 5 Bible Stories that Could Be Fantastic Movies!

The Bible is full of God’s knowledge and wisdom. Every word written inside of God’s Word was placed there for reason and serves a specific purpose. That being said, while reading the Bible, there are some stories that would make amazing onscreen movies. Here are five movies we’d love to see made.

A story full of excitement and adventure, this book of the bible would make an epic live action adventure, with a character, Jonah, who runs away from God only to discover that you can’t escape God’s calling.

“Then the Lord sent a great wind on the sea, and such a violent storm arose that the ship threatened to break up. All the sailors were afraid and each cried out each to his own god, and they threw the cargo into the sea to lighten the ship.”

The very definition of a biblical epic, this one is a story about the underdog coming from behind, about the miraculous, and most of all, about the Lord protecting his people by stopping the sun mid-battle so Israel could defeat their enemies and defend their land.

“The sun stayed in the middle of the sky, and it did not set as on a normal day. There has never been a day like this one before or since, when the LORD answered such a prayer. Surely, the LORD fought for Israel that day!”

Jacob and Esau were brothers doomed from the beginning. Their story holds rivalry, identity theft, and revenge. This story is packed full of drama. There is a new twist to this story at every turn, but like every great story in the Bible, it ends exactly the way that God wants, with a reunited family. This story would be a winner on the big screen.

“The Lord said to her,

‘Two nations are in your womb,

and two peoples from within you will be separated;

one people will be stronger than the other,

and the older will serve the younger.’”

Job was a man, who had everything and served the Lord faithfully, but one day Satan decided to test his faith, and everything was taken away from him. Slowly, all of his property began to be stolen or destroyed. Everything, including his family is taken from Job, and he sinks into despair, but the Lord restores him in the end. The character arc in this story is perfect for the big screen.

“Then the Lord asked Satan, ‘Have you noticed my servant Job? He is the finest man in all the earth. He is blameless—a man of complete integrity. He fears God and stays away from evil.’”

There’s a lot to learn from Samson in the Bible, unfortunately a lot of it being what not to do. However, that doesn’t make his story any less exciting though and important. It has powerful lessons of putting your strength in God and the dangers of being enticed by the ways of the world.

“The rulers of the Philistines went to her and said, ‘Entice Samson to tell you what makes him so strong and how he can be overpowered and tied up securely. Then each of us will give you 1,100 pieces of silver.’”

Obviously, there are many more great stories in the Bible that would be amazing on screen. Leave a comment below on what movies you’d love to see made into a movie!